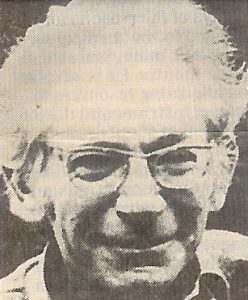 Aaronovitch was the second son of Lithuanian Jewish parents who fled to London in the early part of the 20th century. Born on December 26th 1919, in Stepney’s Cable Street, he left school at 14 years and it was not long before he had joined the Young Communist League and, naturally, had played his part in the infamous battle of that street to prevent fascists from having a free hand in the East End.
From 1949, he worked full time for the Communist Party, playing a role in organising the political work of Communist in Rolls Royce factories, the St Pancras rent strike of 1956 and activity in Fords and Plesseys. He wrote several books and pamphlets on economic questions in this period, including “Economics for Trades Unionists” and “The Ruling Class”. For eight years he was the Party’s national cultural organiser, supporting the work of the Unity Theatre, promoting Paul Robeson concerts and the like. Doris Lessing hints at his role in her “The Golden Notebook” and her biography “Walking in the Shade”.
He had three wives, Bertha, Kirsten and Lavender, five children, and also lived for the last two decades of his life with Kath Halfpenny. Two sons became well-known, Owen, the actor, starred as Deirdre’s lover in `Coronation Street’ and David became well-known as a student leader, renegade Communist and sometime media hack in recent years.
As he approached his fifties, Sam decided to shift from Party work into the academic world. A for-then-rare mature student, he began an economics degree at BalliolCollege, Oxford in 1967. On graduating, he became lecturer and then principal professor in economics at South Bank Polytechnic. There, he created the Local Economy Policy Unit, an independent research institute that encouraged strategic thinking by local authorities. The energy and dynamism that marked him out all his life was still evident in his 70s, when he took to climbing in a big way. He died aged 78 on May 30th 1998.
Source: Guardian 4th June 1998

Sam Syers   Born Colin Paul Syers in Edgware, London, he was the youngest of three sons of John, a tool and clockmaker, and Rose. He acquired the nickname Sam at Kingsbury grammar.   From […]

Sam Elsbury   Elsbury is noted in Communist history as being the London organiser of the National Union of Textile and Garment Workers (NUTGW) who led a break-away “red” union for a short while.   […]