CLASS WAR OR IMPERIALIST WAR?
THE DERBYSHIRE LABOUR MOVEMENT AND THE POLITICS OF 1914-1918
Illustration: graffiti made by conscientious objectors imprisoned in Long Eaton 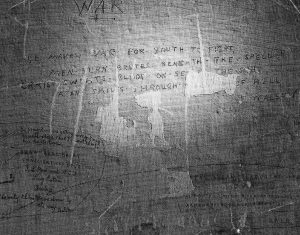 THE ‘SPRING TIDE’ OF TRADES UNIONISM Countdown to the Reform Act of 1832, the GNCTU and the Derby Turnout of 1833-4 1 “Blackguard villains of that now radical town” The Whigs dominated Derby politics throughout […]

Chapter 5: “Peaceably, If We Can – Forcibly, If We Must”: trades unions, the working class and Chartism in Derbyshire in the struggle for economic and political liberty 1 The Birth of the Charter (1839) […]