Pictured below in his prime in the Daily Worker of 1st January 1952, he was born on 25 November 1916 as Alfred Ruben. Alf was, from the age of 18 years, the man behind one of the most famous horse racing tipsters – Cayton, the Daily Worker racing correspondent. His life-long passion for racing was kindled by his father, whose photographic business in Deptford, South-East London, was a hive of activity for what were then illegal bookies’ runners. A couple of CP members – he called them “comrades” were lodgers and knew Alf was interested in racing, so suggested the Daily Worker.

When he joined the staff, many activists were not well-disposed towards the idea of racing in a revolutionary paper. One of Cayton’s predecessors had not lasted many weeks, leaving after he was not allowed to sign his racing notes as `Nilats’ -Stalin backwards.

The paper was now in Cayton Street, off the City Road on the fringes of London’s East End, which seemed as good a name as any. Alf soon began a winning spree. In his first winter he did better for nap selections than The Jockey’s list of tipsters. Cayton had to study form from racing periodicals day and night to keep up. Eventually, he was able to get decent earnings as a tipster for both Reynolds News and the Daily Sketch, doubling up for the Worker for 18 months until the war intervened.

His own efforts at the Worker were complemented by a succession of lesser tipsters, who concentrated on the daily double and snippets of racing news.

Cayton’s most celebrated winner came in the post-war period when the Daily Worker was still at its peak. But there was no coincidence about it for Cayton, who had tipped the horse successfully earlier that season. “I had napped it at 8-1. Two years later he was again the only tipster to find the National winner, Nickel Coin at 40-1.  He won the Sporting Life naps title four times.

His own wins during the 1970s and early 1980s brought him benefits, such as paying off a mortgage.

Although Alf never formally joined the Communist Party, his strong loyalty to the Daily Worker and its successor, along with its politics, surely earns him a place for posterity as being very close to it? Whilst many who claimed more theoretical knowledge decamped from the paper over various political differences, Alf was unfazed by it all, ingoring many lucrative offers from elsewhere in Fleet Street.

He went into semi-retirement from 1990, which meant his tips only appeared twice a week in the Morning Star, and died in 1995. 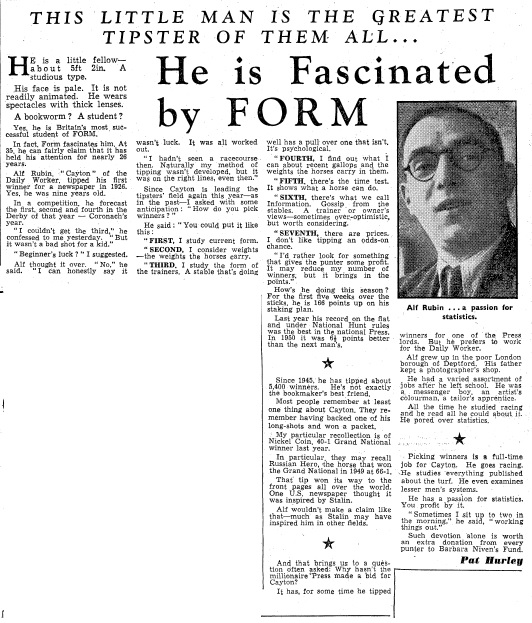 Alf Corum Born in 1890, Alf Corum was from a musical family, although his father (also Alfred) was a bookseller’s assistant. His mother’s father had been the assistant stage manager at Drury Lane Theatre and […]

Gwyn Alf Williams   Born in Dowlais on 30th September 1925, Gwyn Alf (as he was known, to distinguish him from several other eminent Welshmen with similar names) saw himself as "a people's remembrancer", […]

Purcell A A (Alf)

A A (Alf) Purcell Albert Arthur Purcell, universally known to the labour movement and to history as “A A Purcell” and to his friends as “Alf”, was possibly born in London in 1872. An early […]