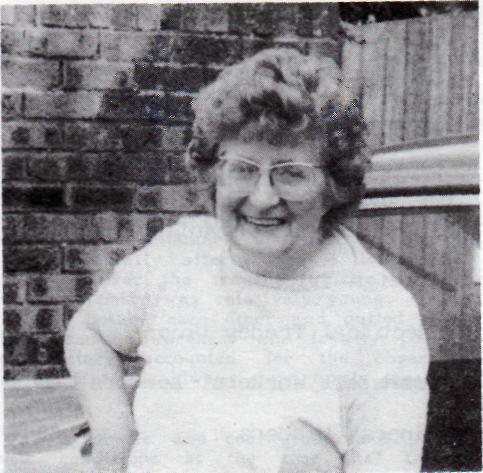 May Rose Hill (nee Franklin) and husband Jim joined the Communist Party in 1937 in Wood Green, to support the fight against fascism. During the war Jim, an electrician, was sent to Scotland to work in the Govan shipyards and May worked for the Communist Party in Glasgow; remaining in touch with their Glaswegian friends, the Browns and the Birdwisas for years.

They returned to London at the end of the war, and May put a deposit on a house in Highgate (from accident compensation) and had their three children. From August 1953, May worked for many years for the Daily Worker and Morning Star, starting as a stenographer, or copy taker, to the newsroom, then as secretary to David Ainley, Company Secretary, and to Len Cook, Production Manager; and as Events Organiser, National Bazaar Organiser, and International Bazaar Organiser (these three jobs concurrently). She wrote many reviews and articles and covered the children’s world peace festival in Bulgaria in 1982 for the paper.

She was for many years Mother Of the Chapel (chief shop steward) of the NATSOPA Clerical Chapel. When secretary of the paper’s Communist Party branch committee, she organised an exchange delegation of print workers between the Daily Worker and the Soviet Union.

She also arranged the purchase of the Daily Worker banner which has been on so many demonstrations over the years. The art work was by Harry Kennedy, machine room overseer, and the banner was embroidered completely by hand in Wales by Patricia John in 1961. When the paper changed its name, M Holt  altered   it  to read  Morning  Star.

May Hill was the self-published author of “Red Roses for Isabel” and “George Sinfield; His Pen a sword”, the paper’s Industrial Reporter, who she worked with closely for 17 years.

When she reached the age of 99, she was too frail to read the paper, so she changed her subscription to a monthly contribution to the Fighting Fund, and a bequest.

Christopher Hill Born John Edward Christopher Hill on February 6th 1912 in York, where his father was a solicitor, his parents were Methodists, a fact of significance to his life-long area of study. When he […]

Howard Hill Born in Sheffield in 1913, Hill trained as an electrician, working initially in various local collieries and steelworks and he was a member of the ETU. In the 1930s he was a […]

Denis Hill Denis Hill (1929-94) was himself a working-class bloke from provincial Brighton, where he spent all his life apart from his two or three years in Prague. He had worked in various clerical […]