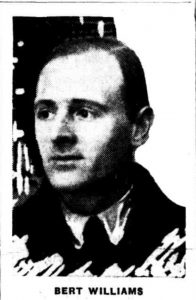 Born in 1895, Bert Williams was originally a miner from Wales, from a working class family of four sisters and a brother. He began work in the pits at the age of 14. He was also a foundation member of the Communist Party in 1920. Indeed, it was in Wales that he and his brother Bill (some sources call him `Bob’) first recruited the subsequent leading Communist, Idris Cox (see separate entry), to the Communist Party. Bill was to follow a career in the miners’ union, subsequently holding national office.

In 1923, both brothers won scholarships to attend Central Labour College, a London based body that functioned as a working class higher education body, funded by trade unions, especially the South Wales Miners’ Federation.

Before becoming a full-time worker for the Communist Party, Bert earned his livelihood in a range of jobs outside the mines. In all of them he played a role as a trade union shop stewards’ convenor or in other capacities with the Amalgamated Engineering Union.

In the January 18th 1929 issue of `Workers’ Life’, Bert wrote a searing critique of the resolutions proposed for the forthcoming 10th Party congress. His argument was essentially that the theses of the Comintern, that the struggle was about to massively intensify, were insufficiently addressed.

This sharp analysis brought him to wider Party attention and he had several publications printed by the Communist Party in 1929: `The Record of the Labour Government’; `The Struggle Against War and the Tasks of the Communists’, and `The World Situation and Economic Struggle – Theses of 10th Plenum of the EC of the Communist International’.

He and his brother were also sent to the International Lenin School (ILS), a training school in Moscow operated by the Communist International. This taught academic courses in political theory and practical underground campaigning techniques.

Back in Britain, Bert was put in charge of the Party’s national “Propaganda Department”, its press and publicity machine.

But he soon volunteered to defend the Spanish Republic, when the fascist onslaught came, as a member of the British Battalion of the International Brigade. He became Political Commissar and served through some of the most desperate battles in 1937. It was later said of him  that “there is no doubt the hardships and strain of this period took a heavy toll of his health”.

It was this Committee that organised a huge counter-demonstration to the British Union of Fascists’ rally in Hyde Park 9th September 1937. Over one million leaflets were produced in aid of mass mobilisation. The result was that a staggering 100,000 anti-fascists faced 2,500 of Oswald Mosley’s fascists, who were protected by 6,000 police.

In 1938, he was elected to the highest body in the Communist Party, its Executive Committee and was appointed the District Secretary of the Midlands Communist Party. As District Secretary, he set the local Party to the task of becoming embedded in industry, looking to early trade union action in, for example the car industry, as at Rover. This strategic insight would later bear much fruit and at the 1938 Party national congress, actually held in Birmingham for the first and last time, Bert Williams spoke energetically of winning a thousand members in his district.

Williams’ personal style is well exemplified by his comments in 1938 on the kind of branches that the Party needed: “It seems to me that there is not sufficient recognition of the fact that we cannot have political discussion and practical work without solving some of the problems of branch life. We have still in the Party too many comrades who go to Branch meetings and talk high polities and if these comrades happen to be in the Chair and the mass of the membership have not understood a word, one often finds this comrade will say to a new comrade whether he would like to say some thing about it. This comrade will shuffle and become embarrassed and this is the way in which new comrades are asked to take part in the discussion. We have to conduct our Branch meetings in such a way so that we start at understanding the experience of our Party members.”

This style fed into a political view that placed the Midlands Party well within the realm of mass politics. An example of the style that was at the heart of this strategy was when Williams was one of the main speakers at a united torchlight demonstration to Wolverhampton Market Place on the evening of Sunday March 20th 1938, entitled “STOP HITLER! SAVE PEACE!”. Although organised by Wolverhampton Communist Party, remarkably, other speakers were from the Liberal and Labour Parties and the Trades Council, including MPs and prospective candidates.

During 1939, Midlands Communists were at the centre of a massive and broad campaign by council house tenants. Bert’s wife, Nancy Williams was the editor of the journal, `The Tenant’, which had a circulation of 40,000. See: http://www.grahamstevenson.me.uk/index.php?option=com_content&view=article&id=727&Itemid=83

Bert Williams seems to have stepped down as Midlands District Secretary in 1953, when the much younger Harry Bourne (see separate entry) replaced him. Bourne had previously been in Spain when Bert was political commissar and it is likely that the older man had recommended a protégé, who was certainly within the tradition of Williams’ emphasis on mass politics, minus sectarianism.

For the next few years, Bert Williams played the less-pressured role as a Daily Worker circulation representative, the move perhaps arising from the ill-health that was suggested had dogged him since Spain.

Bert Baker Bert Baker’s long association with the Daily Worker began in 1940, as the editor’s secretary and then, when the ban on publication ended, for a short time as a reporter. In 1940, Bert was […]

Bert Maskey (Barnett Masansky) – a biography by his grandson David Mason The photograph is a Photoshop restoration from Barnett’s Alien’s Identity Book. To go back to his beginning, Bert Maskey was born ‘Barnett Masansky’ in […]

Raymond Williams Born in 1921 in Llanfihangel Crucorney, near Abergavenny, Wales, Williams was the son of a railway worker. He was 14 when the Spanish Civil War broke out and joined a local Left […]