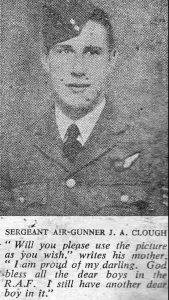 During the height of the Second World War, whilst on active duty with RAF 149 Squadron, Flight Sergeant Air-Gunner James Algernon Clough prepared a letter to his parents, James and Kate Clough, which he left in a sealed envelope marked “To be opened in the event of my death”. Three months later he was reported missing from an operational flight at the age of only 21 years old.

Clough wrote: “I have no regrets dying for my country. It is a grand country, and any man who can call himself an Englishman should be proud to die in the struggle for freedom. Give this message to my friends and yours, and to the people of England if it is possible: ‘ Let every Englishman fight to the last drop of blood in his body. Let him keep the golden fields and busy streets clean and fresh, and let him keep the air he breathes free from the stench of Nazism.’”

His noble words were printed in a Communist Party pamphlet, published on 29th April 1943, entitled “The Stench of Nazism”, along with an account from the Daily Worker of the intense struggle on the eastern front and the atrocities being committed there every day. Sgt Clough’s mother also send a picture of her son to the Party, saying “Will you please use his picture as you wish. I am proud of my darling. God bless all the dear boys in the RAF. I still have another dear boy in it.”

Clough’s death arose when, at 4.57 pm on the 10th November 1942, the Stirling W7582 bomber, which he was part of the crew of, crashed during a training exercise, following a fire in the starboard outer engine. The crash took place just to the east of Kingsway road, Mildenhall, Suffolk, UK, and the crew of seven, including Clough, were killed.

Clough, who was married to Mary, was buried in the churchyard of St John’s in Beck Row, near to RAF Mildenhall, Suffolk.

James Barbour James Barbour was born around 1893 and served in the Royal Army Medical Corps during the First World War. He was first elected as a Communist Councillor in Perth, Scotland, in 1928. Having […]

Kim James Born in the 1920s, Kim James was a modern renaissance man all to himself.  He served in the 3rd Royal Tank Regiment during the Second World War when he joined the Communist Party. He […]

Tommy James   Tommy (T H) James was born in 1898 and began work in 1912 at Rotherham Main Colliery. After a spell in the army during world war one, he found himself unemployed and […]