Born in 1888 in Wick, where he worked as a fish smoker from a young age,  Alexander (sometimes Alec, or Alex) Geddes was an ASE (AEU) activist in Greenock’s Workers (shop stewards’) Committee, in a torpedo factory, and a leading member in the Scottish Communist Party in the 1920s.

In 1901, when Alec was 11 years old, his single parent family lived in Grant Street, Pultneytown, Wick, Caithness, Scotland. His fish worker mother, Euphemia Geddes, was a widow, born in Wick in 1866. His sister, Nellie, was two years younger and at school. But the absence of a reference in that year’s census to Alec being at school or work was probably because he was doing a bit of both – and increasingly the latter. The law from 1870 was that a boy of his age should only be a half-timer but, amongst the very poor, this rule was widely avoided.

The name Euphemia Geddes appears in the record in Scotland quite a bit from 1820 to the present day, seemingly originating with the name of a popular actress and singer, which was taken up by a particular extended family across the east coast of Scotland. Euphemia’s grand-daughter from Alec, Euphemia M, was partly named after her but seems always to have been called Effie. Her own mother does not seem to have been much involved in her life. In her youth, Effie became a significant figure in Communist children’s and youth activities.

Originally intended to be called the Scottish Communist Party, it was given its name of CLP after Maclean failed to turn up to the founding conference, which promptly decided to remain a provisional body until it could join up with the British Communist Party. The CLP and the remainder of the CP(BSTI) dissolved into the all-British Party in January 1921.

Geddes’ involvement in electoral politics had dated at least to the 1918 general election, when he had spoken in support of Fred Shaw, the unsuccessful British Socialist Party candidate for Greenock.  He himself stood as one of the four national Communist candidates at the November 1922 general election for Greenock, a shipbuilding constituency on the south bank of the Clyde. Then aged 44, his address was given as 44, Robinson Avenue, Greenock. His proposers include a Peter Munro of East Shaw street and a Peter McGree, also of East Shaw Street.

He seems to have had the support of all parts of the labour movement and, with 9,776 votes, or 34.1% of the vote, and coming second, Geddes had clearly laid down a marker in the constituency for the Communists. Geddes also stood as communist candidate for the local Greenock council.  This precedent appears to have paved the way for a Communist Party candidate, L Canning, to be elected for Greenock in the November 1922 council elections; this is probably the first elected Communist Party councillor in Scotland (Canning’s son would be a long-term Communist councillor).

This was a period of unstable governments and regular elections. In 1923, Geddes increased his parliamentary vote to 10,335, or 38%. The following year saw a stronger Labour presence but Geddes still had 7,590 votes and was again second, albeit that the percentage had dropped to 29%. A similar vote was recorded by Alec Geddes in 1929, when he polled 7,005 votes or 25.1%.

At the 1925 national congress of the Communist Party, Geddes spoke of his recent return from a visit to Soviet Russia, he presented a banner to the Congress from the Samara Cavalry Division, one of the more illustrious units of the Red Army, had of the Red Army, which he had visited on the Russian-Polish border. Geddes greeted with great enthusiasm delegates rising and singing the Red Army March.

His daughter, Effie, named Euphemia Geddes after his own mother, became a leading figure in the Communist Party’s Children’s Section, or Young Pioneers”. She married Jim Jones (James C Jones) in 1931 in Lewisham, which had a particularly strong Communist children’s group. Now a national leader of Britain’s Young Pioneers, she was advertised in the Daily Worker on 15th July 1933.

She then led a group of Pioneers on a tour of Russia in 1933, but unexpectedly became ill and died on September 1st. She is buried in a cemetery in Kharkiv.

It’s possible that the trauma of this loss promoted Alec Geddes to withdrawn from public life.

The Daily Worker Women’s Page on September 9th 1933 carried the following, a poem and messages from Pioneers; the tribute from the Greenock Pioneers is likely to be from Effie’s home group:

Effy Jones’ grave in Kharkiv still stands, marked by a significant bi-lingual monument. Her name was rendered as “Effy Johns”, perhaps a phonetic rendering of the sound of a Welsh name spoken with a Scots tinge? Many thanks to Ilia Davidov for the photos and for asking after Effy and bringing her to contemporary attention in her native land. 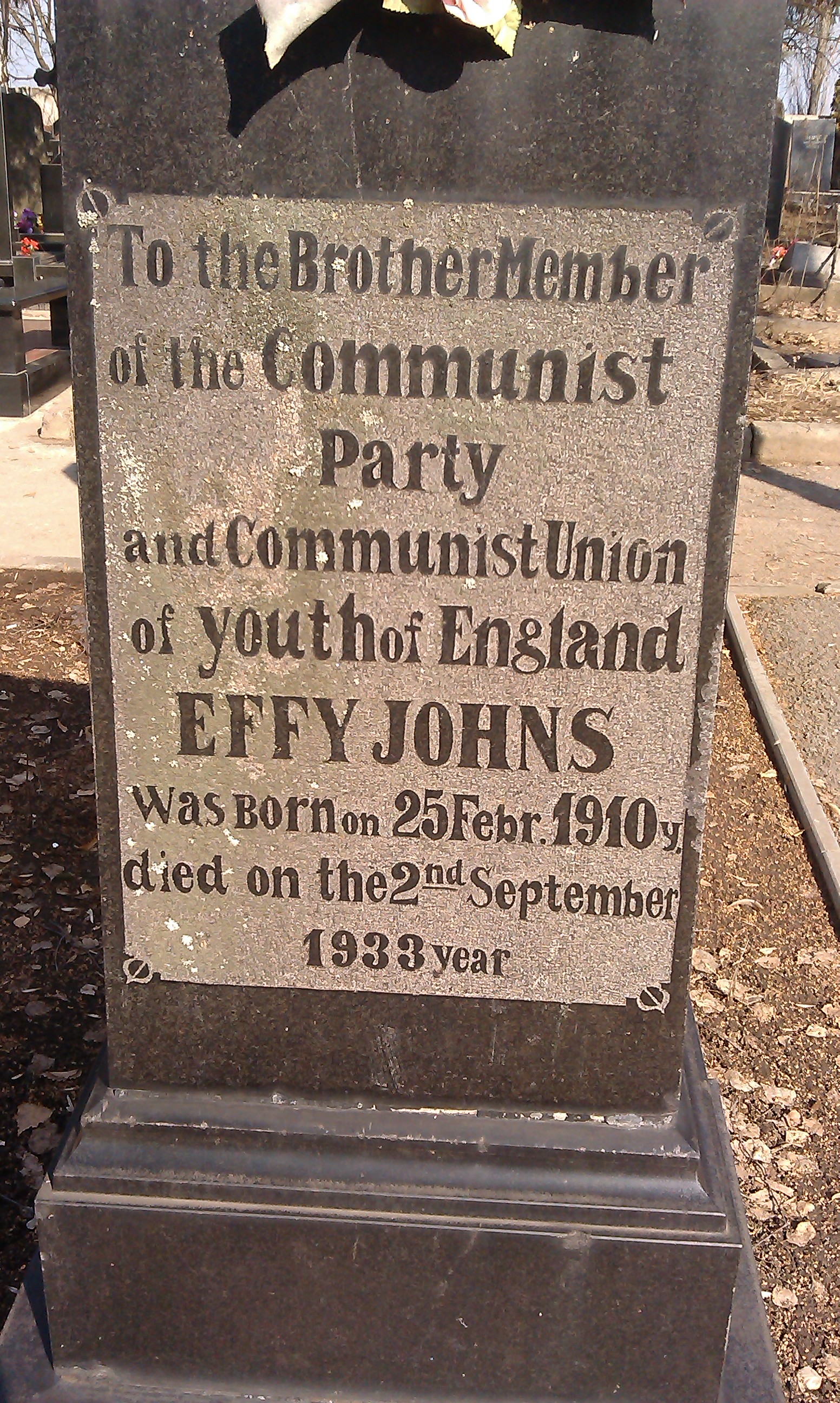 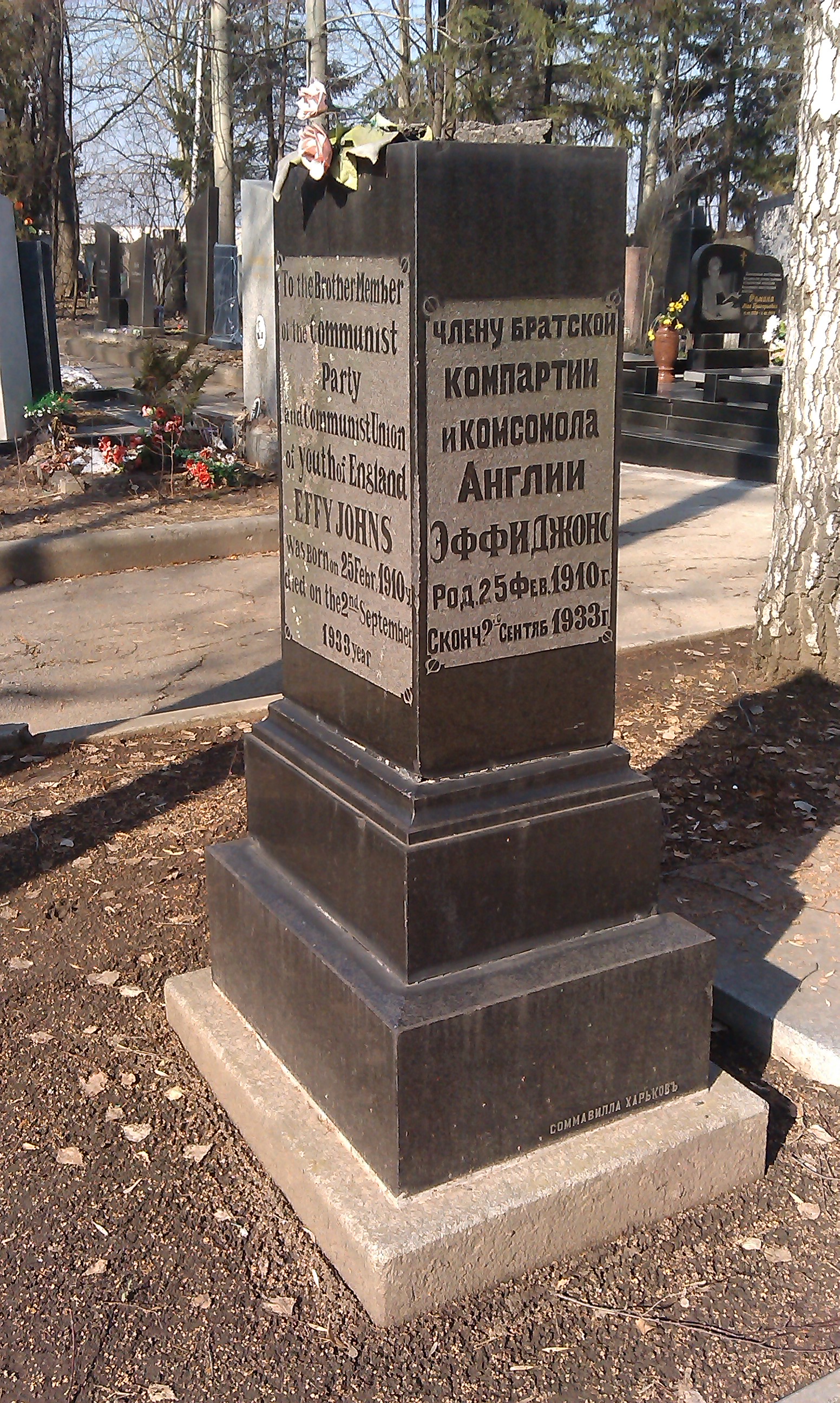 David Ivon Jones   D I Jones was born in 1883 in Aberystwyth, Wales. Jones was orphaned as a young child and brought up by his grandparents, but his grandmother also died when he was […]

Jack Jones Not to be confused with his namesake, the leader of the T&G, Jack Jones was briefly a Communist in the Welsh mining valleys and always a chameleon type figure in the political sphere […]