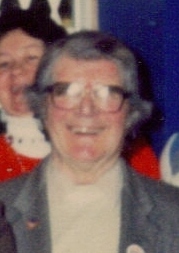 Doug Coleman pictured in 1988) was probably born in in 1918 and joined the Communist Party as a very young man in 1935. It is believed that he was active in prize-fighting in boxing just before and during the war. It was also rumoured that, in the pre-war period when living in , Doug’s fighting had not been limited to the ring. He was certainly a likely street-fighter and often displayed strong antipathy to fascism in later years. Even in old age, Doug would pugnaciously declare himself willing to “biff up” any fascist seen on the street, so he must have been ferocious as a young man!

He seems to have tried to turn professional in his boxing career in the immediate post-war period, unfortunately with little success. At any rate, he lost the three recorded and traceable fights that he had in early 1946 and then finally in late 1947, being knocked out in one of them and loosing on points in the others. These bouts took place in Swadlincote, Ardwick Stadium in , and baths in .

This is suggestive of the likelihood that he spent the war in the Derby area and, in view of his later certain occupation, as a coach builder at what was then still the Midlands Railways Carriage & Wagon workshops, this was because he was in a reserved occupation. He may just possibly have been elsewhere before the war’s end, but certainly by 1945, Doug was already deeply involved in trade union and political activity in the town. He was a delegate to the Area Trades Union Council that year at least.

It is possible also that his medical condition was not good and that this prevented him from being called up for the services and probably from being a successful professional boxer. In later years, Doug exhibited strong symptoms of Dementia Pugilistica (PG), a neurodegenerative ailment that often affected boxers in this period and is still a concern for a small but significant minority. More colloquially called punch-drunk syndrome, the condition is caused by repeated blows just below the threshold necessary to cause concussion. Signs of DP develop progressively over a long latent period, sometimes taking decades. Doug had trouble with his speech in retirement, although he fought this valiantly. Sadly, even in the labour movement, there were those who thought Doug’s affliction either mentally or alcohol related.

But back in the days when he first hung up his gloves, a confirmed role for Doug’s fists occurred in 1947. Surprisingly, so near to the end of the war, fascism began to rear its ugly head again. This was a time when serious social disturbances of an anti-semitic nature arose with tensions associated with Zionist terrorist activities in against British troops, in the struggle to establish the state of . Allied to rabid anti-communism, now growing fast and being nurtured by the state and media, the newly emergent fascist movement was able to find fertile ground.

At this time, a report appeared in the press of a woman being brought before court for attacking a man whose son was trying to recruit her husband into the fascist movement. Then fascist meetings began to be held in Derby’s Market Place and a movement called the Sons of St George was used as an electoral front, there still being considerable hostility to the words ‘fascist’ and ‘nazi’. Three such candidates stood in the local elections in in 1947. Openly jingoistic and racist, the Sons declared themselves to stand for the Empire, the banning of strikes and a generally authoritarian kind of super-Toryism. Africa should be developed as a “national estate” and there should be total opposition to “any absurd promises that the new , which white genius had created, will be handed back to the government of people who are incapable of development or maintenance without white leadership”.

Both Doug and another Communist raised the issue at the Area Trades Council (DATUC) in October 1947. Their worries over the “growing activities of Fascists in ” were voiced by J I (Andy) Bird of No. 22 AEU branch who complained that anti-semitic speeches were being made every Sunday evening at Market Place meetings. Bird put a resolution which was seconded by Doug Coleman, which called upon the labour movement “to put an end to this menace”. But there was not a consensus, some voiced concerns about “free speech” and there was a narrow rejection of a call to act. By January 1948, the trades council was at least won to accept a call upon the Mayor to summon a town’s meeting to oppose the “menace of fascism”, to which all genuine political and religious bodies could be invited.

Tension arising from fascist activities was inevitable, especially when the Sons of St George came across active Communists. Andy Bird recalled that he was once caught out on his own, while campaigning door to door for the Communist Party in ’s . A group of fascists spied him on the doorstep, talking to a potential voter. Only the co­operation of the householder enabled him to escape the inevitable beating up. On another occasion, he considered his “life had been saved” by Doug Coleman.

Tommy and Winifred Moran both stood as independents in the 1947 local elections on a platform of opposition to the “Comintern” and the Communist Party, despite the fact that the former was now dissolved! They were both prominent fascists in , but were not enamoured of the Sons of St George, there being personal and minor ideological differences between themselves and other fascists. In May 1948, two fascist meetings were held in competition in the Market Place and these resulted in violence, when Tommy Moran was called a Jew.

The Morans were long-time supporters of Oswald Mosley. The old British of Fascists now being extinct and discredited and the ultra-right being splintered, Mosley was able to found the Union Movement in February 1948. Winifred Moran soon found herself in court, after making anti-semitic speeches for the Union Movement, which now developed a following in the town. The Movement’s local branch officer, F W Antley, was able to obtain an invitation for Mosley to speak at the Derby Business Men’s’ Discussion Group in 1949, itself testament to the degree of respectability with which the formerly imprisoned would-be Fuehrer of Britain had attained. Eventually, the Government was persuaded to act to control the increasing tension created by fascism’s exploitation of free speech and Mosley’s moment faded for another ten years.

Doug Coleman probably contested elections for the Communist Party many times. But he was certainly Communist candidate in ’s Bridge Ward against the Tory Mayor, Councillor Z P Grayson, in the municipal elections of May 8th 1952. This was despite the convention that political parties would not force the Mayor to defend his seat. Then only 34 years old, Doug put his policy in a letter to the editor of the Derbyshire Advertiser. “Tory leaders are traitors to our great country by placing it under economic subjugation to the .” For his part, he stood for “breaking the grip of the American millionaires upon our country”.

Despite the trenchant words, he polled only 78 votes to the Mayor’s 1,901! Doug had another go in 1953, when he stood in what had been an indepenedently held ILP stronghold, but he only took 42 votes to Labour’s 765. In 1954, he stood in Osmaston ward, getting 89 votes.

Despite his verbal limitations, Doug continued to attend and speak at Area Trade Union Council meetings well into the late 1980s, at least.

Tom Coleman   In 1935, Tom Coleman of Dalefield Avenue, Normanton, was fined £1:13s at the West Riding Police Court at Wakefield for harbouring an illicit still.   The item made the news since he […]

Douglas Bain Born on October 28th 1939, Bain grew up in Shetland and in his teens kept an extensive diary, which is now in the Shetland archives and is a valuable record of Shetland […]

Doug Stone Born May 17th 1917 in Ripley, Derbyshire and educated at Swanwick Hall grammar, Stone joined the Communist Party in the mid-1930s.   He was a research chemist at the Denby Pottery Company from […]