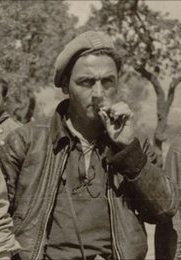 Sam Wild was born in Ardwick, Manchester, to an Irish immigrant family, in 1908. He grew up attending rallies at ’s listening to speakers calling for the home rule of . Having left school at 14 with no skills, a fairly normal consequence for working class boys, he got involved in the early unemployed workers’ movement. On finding little in the way of regular and decent work in he subsequently joined the merchant navy, on the basis that he would at least be housed and fed, becoming a boatswain's mate.

In 1936, back in , Sam heard speakers in warn that ordinary Spaniards were struggling to stop fascists take over their country.  His sister, Hilda, had a boyfriend called Bert Maskey, who was of Russo-Lithuanian Jewish background and very politically left-wing. The two of them almost instantly took a train to to make their way to for basic training, although Maskey was killed very early on, in the olive groves, Jarama, on the 12th February 1937.

Sam turned out to be an inspirational leader, who joined the Communist Party while he was in and stayed in it all his life.  He was wounded in combat five times – in February 1937 alone by a total of four machine gun bullets – but he always recovered and was still in the front-line at Teruel in January 1938. The following month, he replaced Bill Alexander (see separate entry), as commander of the British Battalion, after he was wounded in the shoulder.

Wild was a very unconventional commander in his manner of disciplining the men by his own example of extreme personal courage and readiness to immediately challenge opposition by use of either his fists, or a ready and sharp tongue, a style that did not produce animosity but intense loyalty to him as a commander. He was captured – but escaped – during the British Battalion’s defence of Belchite. After the battle at Ebro, wounded by shrapnel but refusing to leave his men, he received the 's highest decoration for bravery, the Spanish Medal of Valour (a kind of Victoria Cross). The citation read: “His untiring energy and efficiency gave an example of bravery to the whole battalion.” 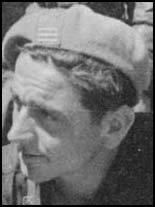 When Sam came back from , he worked for the Communist Party for a while, on a speaking tour on the war and issues arising from it.

The Wild family were clearly staunch Communists of some note. Sam’s father died on the 26th Sept 1939 and he was buried at Gorton Cemetery on Friday 29th September in a ceremony conducted by Frank Bright (see separate entry), then the Lancashire Communist Party District Organiser.

Around this time, Sam married Bessie , a Communist Party activist who, as Bessie Wild, became not only the mother to his children but also a significant political figure in her own right. Over subsequent years, Sam stood as a Communist Party candidate in local elections, and was active in political campaigning. For most of his working life, hereon, he would become employed on building sites, as a scaffolder and was frequently elected site shop steward.

Sam moved to Totley in in his later years and died in 1983.

He was posthumously granted Spanish citizenship.

A blue plaque commemorating him is now mounted on the former family home on , between Longsight and Fallowfield.

Sam Syers   Born Colin Paul Syers in Edgware, London, he was the youngest of three sons of John, a tool and clockmaker, and Rose. He acquired the nickname Sam at Kingsbury grammar.   From […]

Sam Elsbury   Elsbury is noted in Communist history as being the London organiser of the National Union of Textile and Garment Workers (NUTGW) who led a break-away “red” union for a short while.   […]