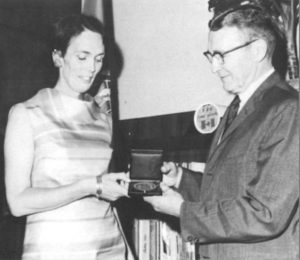 Erna Bennett, born in Derry, Ireland, in 1925, was one of the early pioneers of genetic conservation. After active service in the Second World War in the Middle East and Greece, she returned to her studies. In her early postgraduate years she taught in England, and was engaged in cytogenetic research there and in Ireland for a number of years.

Working the Scottish Plant Breeding Station with J. W. Gregor in the mid-1960s, she returned to her early interest in micro-evolution and the origins of genetic diversity, and began what was then to become a long series of expeditions collecting genetic diversity of mainly forage and cereal crops. At this time she wrote her 1964 paper warning of the need conserve and protect genetic resources, “Plant Introduction and Genetic Conservation: Genecological aspects of an urgent world problem”, which was widely read and translated into a number of languages.

A member of the British Communist Party from her youth, wherever she was in the world, Erna kept in touch with the local Party. For a long time she was active within the Italian Party.  But whilst in Australia, she joined the Socialist Party of Australia (now the Communist Party of Australia) and was elected a Central Committee member. She was also on the Editorial Board of the Australian Marxist Review. She was a prolific writer, contributing regularly to the Party’s press.

Erna wrote a history of modern-day Ireland especially since the 1916 Easter uprising. It was entitled Class Struggle and National Liberation – Counterrevolution in Ireland and was published in November 1993 as a special issue of the AMR. (Available online at www.cpa.org.au/amr/31)

In October 1994 Erna presented a seminal report to the SPA Central Committee. The environmental crisis: past the point of no return, sketching the historical phases of the environmental crisis, analysing global warming, toxic waste, radiation, ozone depletion and outlining what must be done. This laid the foundation for the Party’s ongoing commitment to environmental issues and subsequent important CPA publications in this field.

The Australian CP obituary described her as having “a towering intellect which she directed towards every political issue that arose, contributing significantly to the Party’s debates and policy making. She was incisive, witty and passionate in discussion and had a ferocious temper at times. She had wide experiences from many countries, using them to illuminate her arguments and also to amuse and entertain guests at her Blue Mountains home.

She was a delightful host, together with life long companion Pru whose commonsense and warmth contributed so much to their hospitality. Evenings and weekends were crammed with political debate, discussions about poetry, food, literature and much more. Their home was always open to comrades and friends.

Erna had a keen interest in and love of poetry, its translation and production. One special delight was sitting on her balcony on cool Blue Mountains evenings, listening to her read aloud some of her favourites. She wrote many poems herself, expressing her love of humanity, her hatred of injustice and her hopes for a better world.

Erna joined the UN’s Food and Agriculture Organization (FAO) in 1967, where she succeeded in mobilising the FAO to become involved directly in collecting the genetic resources of crop plants in many countries, while there was still time. She was responsible for coordinating national and international exploration and genetic conservation programmes in the countries of the Mediterranean Basin and southwest and Central Asia as a far as Afghanistan, and travelled very widely in the course of her work. She also initiated the first world survey of crop germ plasm collections, which yielded invaluable information that has been drawn on widely over the years. The organisation acknowledged her contribution with the award of the Meyer memorial medal in 1971. Her work influenced the 1972 UN Stockholm conference on the environment and led to its call for a global programme on the conservation of plant genetic resources. But she was a controversial figure, too, because she opposed the organisation getting too close to large agro-chemical corporations.  Thus, when, in 1982, corporate interests came to dominate the organisation’s policy, she resigned from the UN Food and Agriculture Organisation.

She co-authored and edited the first classic book on genetic resources with another early campaigner, Sir Otto Frankel. Published in 1970, “Genetic Resources in Plants”, it helped to convince the 1972 Stockholm Conference on The Human Environment (a predecessor of the 1992 Earth Summit) to call for the first global programme on the conservation of crop genetic resources.

While at FAO, Erna became increasingly concerned that the immense efforts to collect and conserve the world’s precious and irreplaceable germ plasm in which she was involved stood in grave danger of being hijacked by powerful private interests. She observed the initial moves towards first, covert, then overt and massive privatisation of genetic resources and the increasingly dominant role of corporations determined to usurp control of immensely valuable agricultural germ plasm. Having battled within the FAO for many years to keep corporations out of the UN system, she was eventually forced to resign from the UN in 1982. From then, she stayed active on these and other issues- lecturing, writing and advising- but outside official circles.

Erna Bennett was not alone in the first turbulent years of campaigning for programmes on genetic erosion. She recalled with great warmth and affection many of her early fellow pioneers. But as Pat Mooney wrote in his book Shattering, “it was this colourful, outspoken Ulster-born Irish revolutionary who first coined the phrase ‘genetic conservation’ and brought substance and strategy to the term for the world community”.

During the Noughties, Erna finally retired to Scotland, where she joined the CPB. She died in January 2012, aged 86. She was survived by her partner of 42 years, Pru Rigby.

Don and Dusty Bennett Don Bennett, born in 1907, was a leading member of the Walsall Communist Party branch who, together with his brother ‘Dusty’, born Gordon but always known by his nick-name, were born […]

Mick Bennett Bennett was a precocious, yet senior, Young Communist League activist from his youth. He was subject to intense MI5 scrutiny from 1932, possibly for the rest of his life. This largely began as […]