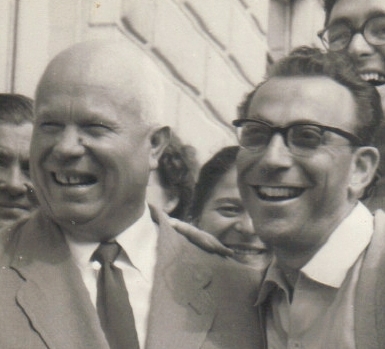 One of the crop of mid-20th century Communist councillors, many of whom were Jewish, Barney Borman (pictured left with Nikita Khruschev in the 1950s) was born as Bar Kochba Borgomolny. He was born in on November 9th 1919, the youngest of ten children. [The name was taken from his given name of Bar Kochba, the Jewish leader of what is known as the Bar Kochba revolt against the Roman Empire in 132 CE. The name means 'Son of a star'.]

Barney’s family were part of the big influx of Jews who arrived in Britain from around 1880, up to the First World War, fleeing persecution in . The tripling of London’s Jewish population saw most settle in the East End, developing their own distinctive community, utilising their trades as tailors, shoemakers, cabinet-makers, cigar makers and traders of all kinds.

His father, Sholom Bogomolny [first changed to Borgelman and then later Borman], was the inventor of the whistling kettle, possibly invented during WW1. Bogomolny was “a Tinker” by trade.

Whilst the term has become used in British society to refer to marginalised persons, such as Irish travellers [remove comma], or “Gypsies”, the word `tinker’ was originally applied to an itinerant tinsmith, which was certainly still in use in Sholom’s heyday as such, that is to say to describe someone who repaired  household utensils, door to door. Clearly, his skill (evidenced by his invention) and subsequent savings from earnings must have allowed him to establish himself in society somewhat.  The patent for the whistling kettle, according to his wife, who called it ‘the numbers’, was never renewed

Sholom’s family, came from Ukrainian peasant stock, from the small town of . This fact alone – and its associations in the fight against fascism – must have certainly impelled the young Barney towards commitment towards the Communist Party. The town was the site of intense military activity when German forces focused on the area were totally encircled by the Red Army, during the Second World War. Known today in military circles as Hube’s Pocket, the engagement is taught in military academies as a classic example of how a surrounded force can evade total destruction.  The town was also again briefly notorious in the 1961 trial against Adolf Eichmann, which resulted in an extensive historical record of the Nazi genocide against Soviet Jewry, more so than for most other villages across . The trial heard that 23,600 Jews were killed in Kamenets-Podolski in three days.

In the early 20th century, the Borgelmans were prosperous, residing in a largish house in Mile End, their own carriage, and a servant.

Very early in 1920, Sholom – being an ardent Zionist, took the family of nine children to ; one child had already been killed in a horrific accident. Sholom’s wife came from Sephardi Jewish stock, a group descended from after the 15th century. Barney was only a couple of months old and was a sickly child, causing the family doctor to doubt that he would survive the arduous journey. In fact, around 1930, the family ran out of money and found life to be a hard. A son had been lost during inter-communal tension in 1922. Thus, the family came back to , where Barney worked, like his brothers, in the sheet metal business and doing car repairs. During the Second World War, he was in the RAF, working on aircraft maintenance.

Barney married Yetta Levine on September 29th 1940 at Richmond District Synagogue, Sheen Road, Richmond, . (Yetta is a very common Jewish name from the shetls of the former Eastern bloc nations.) She was of Communist sympathy well before Barney and retained strong views. It is likely that both husband and wife were members of the Party following the titanic struggles at the of (1942-3).

Barney became involved in the infamous Stepney Communist Party, which broke through in gaining elected representation on Stepney Council from 1938. The local Party was overwhelmingly Jewish; its particular place in post-war political history is cemented in the election in 1945 of a Communist MP for Mile End, Phil Piratin (see separate entry).

He is photographed here in the 1950s accidentally meeting the Soviet leader, Nikita Krushchev – a Ukrainian by birth – who had simply been strolling along the street in .

The Borough of Tower Hamlets was created as part of the review of Government in the early 1960s. The area of the borough was made up of the former Metropolitan Boroughs of Bethnal Green, Poplar and Stepney, all of which had a tradition of significant Communist intervention in the electoral sphere, some going back to the foundation of the Party in 1920.

The first elections to the council were on 7th May and the Communists were to become the second party in local government, indeed after Labour the only other party, discounting a Ratepayers’ Association, with two seats, as a party.  (The RA was to join forces with the Tories, where it belonged by the next election.) The thirteen Communist candidates won a total of 8.6% of the vote across the borough but much of this was concentrated in St Mary’s ward.

The re three Communist councillors were elected with some 46% of the vote: Solly Kaye, Barney Borman and Peter Roche – even with Labour and Liberal opponents.  A technical problem arose over the new Councillor Borman’s statutory declaration of acceptance of office and a fresh election was prescribed by the authorities.

Nonetheless, on 13th August 1964, Borman handsomely won the re-election this disqualification had obliged, much increasing his vote to 58% of the total votes cast, by obtaining 709 votes.

After a Tory government was elected, Labour’s vote in Tower Hamlets surged heavily in 1971 and the Communist councillors were displanted, even though the overall Communist vote in the borough only fell slightly to a little under what it has been in 1964. During the 1970s and 1980s, Communist electoral influence faded as Jewish residents died, moved, or decamped.

Bernard "Barney" McCourt McCourt was a leading Communist from Bellshill, Lanarkshire, Scotland. He was a parliamentary candidate in the 1931 general election for Bothwell. Every penny had to be raised locally. The Daily Worker reported […]