Her mother Margaret worked hard as a char lady and in other work to support her family, almost becoming destitute until her eldest son saved the family by getting a job with a printer in and taking them all with him.

During the winter of 1906-7, Mary was on the rota of women who made soup to sell at a farthing (a quarter of an old penny) a bowl from a Clarion caravan parked by St. George's Hall on . She visited the sick, collected for the unemployed and kept open house for travelling socialists. She frequently spoke at outdoor meetings, often at the monument or on street corners. Sylvia Pankhurst described her as the "finest, fighting platform speaker in the country". In a city that was dominated by sectarianism, she refused any religious identification and was a regular heckler at both Catholic and Protestant political rallies.

However, it was through her work as a trade union organiser that Bamber became most visible. In the years leading up to the First World War, she worked tirelessly as an official for the Warehouse Workers . She travelled the length of the dock road, organising women from Johnson’s Cleaners and Dye Works in the North end to ’s Bobbin Works in the South. 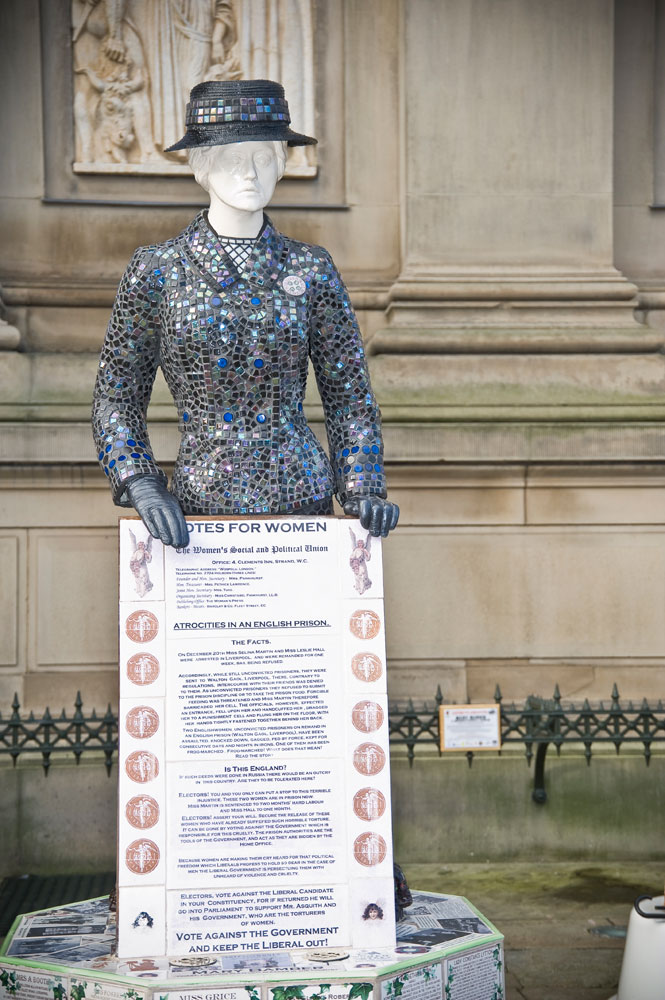 Bamber was often up before dawn to catch bag women – who made and mended the millions of sacks used to contain and transport the products which passed through the port – as they walked to work. Like employment in rope manufacture, which also drew Mary’s attention, this was heavy, filthy, poorly paid work often undertaken by only the most desperate – women caring for dependants, married women or those old and single. Mary gave a great deal of time – often fruitlessly in terms of actual recruitment – to talking to these women, pressing leaflets on them and persuading them to come to meetings.

Though her work as a trade union organiser was central to Bamber's politics, it was interwoven with other activity. She was present at the 'Bloody Sunday' demonstration during the 1911 General Transport Strike.

described by Sylvia Pankhurst as the ‘finest, fighting platform speaker in the country’ – reclaims the original ‘Speakers’ Corner’ on St George’s Plateau just as she did in the early 1900s.In 1919, she stood as the Labour Party candidate in the Protestant stronghold of Everton. Campaigning on everyday issues such as milk, education and municipal laundries, she won by a tiny majority. On 21st May 1919, Mary Bamber won the Everton ward in the council elections, standing for the Labour Party.

Her win was remarkable for a couple of reasons. Not only was she a Communist who sympathised with the Russian revolution,  but she was also a woman. Following years of agitation by the suffragettes – amongst whom Bamber was a prominent campaigner – the post-war government of David Lloyd George had finally extended the vote to women over the age of thirty. No women were elected to Parliament in the 1918 general election, so Bamber must have been one of the first females to be elected in .

Sylvia Pankhurst described Bamber as the “finest, fighting platform speaker in the country”, and her election in the former stronghold of Everton was only one landmark amongst many in a remarkable life of struggle

In 1920, she became a founder member of the local Communist Party and in 1920 she attended the Second Congress of the Third International in . She was a local committee member on the National Unemployed Workers Committee and, in September 1921, was one of those arrested at the occupation of the .

By 1924 she had left both being a city councillor and the Communist Party, saying that it interfered with her work as an organiser. She was present at all the key demonstrations held during the 1920s and into the thirties. she promoted the dissemination of contraceptive advice as a mechanism to empower women.

She spoke at her last meeting just two weeks before she died in 1938 in at the age of 64.

Her daughter Bessie Braddock was a prominent Labour MP, who increasingly turned to the right.

Mary Knight Knight was a leading Communist Party and Labour Party member in Rusholme in Manchester, where she was a councillor up to the 1920s.   She had been a member of the long established […]

Mary McLennan Mary Reid was born in 1928 and brought up in poverty during the 1930s in the Gorbals area of Glasgow. Such an upbringing fuelled her desire to change the world and she met […]