Frieda Maria Truhar was born on August 4th 1911 in Pittsburgh to a Croatian immigrant couple of Catholic background who had become firm socialists, her father being a steel worker.

She and her brother attended a socialist Sunday school, control over which later went to the control of the Communist Party when the US Socialist Party expelled some 50,000 members for being leftist.

Her parents were not in favour of the First World War and found themselves in trouble with the US authorities when Frieda was overheard reciting a poem as she walked home from school that was entitled “I did not raise my boy to be a soldier”. He father was questioned under the recently passed Espionage Act. Despite this, Frieda recalls going out with her father in the dark to push English language anti-war leaflets through letter boxes.

Her mother was from peasant stock and the arrival of the Russian revolution held for her real joy. In old age, Frieda told a story about this normally reserved woman: “she was near tears as she lifted me high and then sat me on her lap to explain how `ordinary people like me and Papa have taken things into their own hands’. Six years old then, I did not understand, but I felt happy because she was so happy. The incident remains vividly in my memory.” Naturally, her parents joined the largely foreign immigrant Communist Party of America and the meetings of the Pittsburgh branch were held at their house. When a new united Workers Party was formed they joined that as they did the later CPUSA.

She joined the CPGB on moving to Britain and was married to Pat Devine, Senior, (see separate entry) in 1932 when he was deported from US. They went to Fife to carry out Party work, then London. Frieda held a number of Party posts, including with the Young Communist League, in Manchester and London. 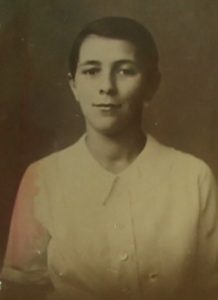 They went to Moscow in 1933, where Frieda worked for Comintern until 1935, first as a typist. Like most foreign Communists they lived at the inaptly named `Luxe Hotel’ in Moscow, where she participated in a women’s naked protest for better shower facilities!

She also worked a courier, going mainly on clandestine trips to Berlin and occasionally to Shanghai. There she had to look after a Comintern safe house, which had a secret wireless transmitter in it, before escaping by sea to Vladivostok.

On her return she worked at Party headquarters at King Street for a time. During the 1950s, she went to a college to train as a teacher, which she later worked as.  She and Pat Devine divorced and she later became Mrs Brewster and was widely known as Frieda Truhar Brewster.  Frieda also wrote an unpublished autobiography, ‘A Long Journey’ in 1988.

Pat Devine Article by Gloria Findlay in `Scottish Marxist’ 1998/1999   Pat Devine was born November 22nd 1898 in Motherwell, the eldest of eight children and four orphaned cousins, he left school at 13 to go down […]

Pat Devine (Junior) Born in 1937, he was a YCL branch secretary in Ilford, north London in the 1950s. The child of communist parents, he recalls that his mother “would sing me revolutionary songs in […]