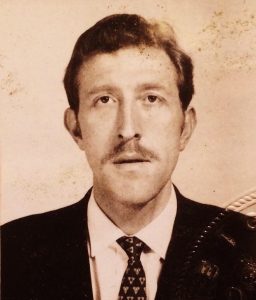 Born in 1936 in Coventry and evacuated during the blitz to the family hometown of Newcastle-on-Tyne, Stan Wilkes was a YCL activist, certainly by the time Fidel Castro entered Havana with his liberation troops on 1st January 1959.

For Stan used to say that he began the task of allowing his trademark moustache to grow the day this happened, vowing never to shave it off unless Castro was ever overthrown. Of course, he wasn’t and neither did Stan ever loose the moustache.

He was a key figure on the YCL executive, leading the early 1960s campaign amongst unemployed youth on Tyneside, initiated and led by the YCL.

Back in the Midlands, he was appointed the full-time City Secretary of the Coventry Communist Party in 1965.  During this time, Stan was active in the broad-based Committee for Peace in Vietnam and CND. He was an excellent muralist and painter. Later on, he took up woodcarving, producing copies of Rodin and rendering Michelangelo in wood as well as his own depictions of the natural world. He married fellow Communist, Val Lester in 1972. Val had been a well-known actress on DDR (East German) televison. Later on, they had a son, Joe.

In 1974, Stan was appointed full-time Secretary for the Birmingham Communist Party, a vacancy that arose when Frank Watters assumed the District Secretaryship vacated by Harry Bourne (see separate entties) Stan left the service of the Party in 1975 and was followed by John Bloomfield (see separate entry) as the full-time worker for Birmingham Communists.

Stan died of cancer in 1984. His widow amd son are still politically active in the Labour Party, trades union movement, and other left organisations.

Stan Hornsby   George Stanley Hornsby was born on 4 February 1900 in Derby to George W, a confectionary commercial traveller, and Ada Hornsby.   Young George seems to have adopted the name Stan in […]

Stan Young   Stan Young was born in Hanwell, west London, in 1920 into a large family. His father was a carpenter and joiner, and his mother a seamstress. He left school at 14 and worked […]

Stan Kelly-Bootle Liverpool-born Stan Kelly-Bootle joined the Young Communist League (YCL) in Liverpool circa 1943, becoming a Party member at Cambridge University around 1950. He was, as he puts it himself, `exposed to computing, on […]