Norris Cymbalist (featured picture) was born in Inverness in Scotland, the son of Communist, Mark Cymbalist, who was a Jewish tailor in Inverness, Scotland (pictured below). His tailor’s shop was at 38 Waterloo Place, Inverness, where he also lived with his two sons Norris and David. 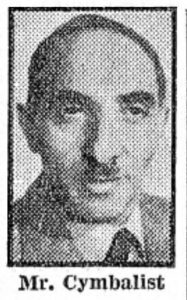 Mark Cymbalist had been a conscientious objector during World War One. He had helped establish the Invernessbranch of the National Unemployed Workers Movement (NUWM) in the summer of 1938, having already become involved in the Communist Party. He ran Marxist educational courses in Inverness for many years and assisted in the election of Mabel (Mabs) Skinner as a Communist Councillor for the Merkinsh area of Inverness (See separate entry.)  He was described as “Very knowledgeable and intelligent”.

During the Second World War, Norris Cymbalist was a radar operator, and had served with great courage and distinction. However, he was to end the War as leading member of the famous Far EastRAF Mutiny of January 1946.

By 1945, Cymbalist was stationed in Singapore, where he witnessed first-hand the poor conditions RAF personnel had to tolerate, while their RAF Officers lived in relative luxury with servants.

Labour had won the recent general election, the war was over, and the RAF men were keen to be demobilised from their stations in the Far East.  Yet they found themselves living in poor accommodation, eating poor food, with petty restrictions, purposeless kit inspections and parades, along with their use as a force to inhibit potential attempts to secure national liberation. There was a lack off ability to such air grievances, itself an issue.

Anger had been brewing for some time, when at 7:30 on Thursday 17th January 1946 eight to nine hundred men gathered on a football pitch at Drigh Road RAF maintenance station in Karachi, today in Pakistan. The number one issue was a petition to the prime minister and a six point programme to meet both basic issue of demobilisation and those factors that had triggered the demonstration.

On 29th January 1946, Prime Minister Atlee reported that incidents had occurred at twelve RAF stations but the Air Ministry later put the number at 22 stations. Some protests lasted a few hours, others up to four days, but all took place within 11 days of the the Drigh Road event.  It was the biggest single act of mass defiance in the history of the British armed forces and improved conditions were won immediately. Action had occurred in widespread parts of the Empire that are today inIndia, Pakistan, Sri Lanka, and Singapore, involving some 50,000 RAF personnel. Some 100,000 RAF men were sent home within months of the mutiny.

A series of Communists were prominent in the rebellion, such as Arthur Attwood, Stone, Noble, Jack Roth and Ernie Margetts, who was later a teacher. Ian Taylor, a Scot, was imprisoned in Winchester. Some had been sentenced, albeit never carried out, to a firing squad, some sentenced to ten years in jail, although the most anyone did spend imprisoned was 21 months. During the campaign to release them, a petition was signed by women at RAF Bishopbriggs, demanding the release of Cymbalist, a course emulated by some military units.

D.N. Pritt MP helped in the campaign to secure Cymbalist’s release, asking the minister if he would make a statement on “the sentences passed on the 243 paratroopers of 13th Parachute Battalion, who were found guilty of mutiny at Kluang Camp by a court martial at Singapore, on 14th May1946.”

In the 1960s, Norris Cymbalist ran poster campaigns in and around Invernessagainst the Vietnam War. He was noted for having placed posters – and painted slogans – in all weathers on the rock faces along the A9.

Gordon Norris Growing up in Hartlepool, Norris was as familiar as the rest of his class and generation with poverty.  Having left school during the Second World War, he found work in steelworks locally. After […]

Mark Dignam Dignam was born on the 20th March 1909, the son of salesman in the steel industry in Sheffield. He was educated at the Jesuit College where he appeared in numerous Shakespearean plays. Although […]

Mark Ashton   Ashton, being born in 1961, was active within the Young Communist League at a time when it was falling into fragments – after having followed a thoroughly revisionist and liquidationist course for […]