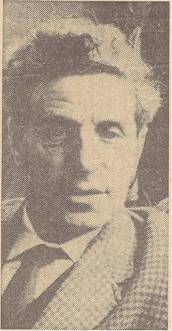 Secretary of the Communist Party’s cultural committee in 1960s, he was for many years editor of the Party’s weekly journal World News (later called Comment). Ted Ainley was born in Manchester of a working-class family 3rd October 1903. It has been claimed that “Teddy Ainley was in reality Theodore Hertzle Abrahamson, whose father had been Lazarowicz”. [Margaret McCarthy ‘Generation in revolt’ p73] He and his brothers, Ben and David, were associated with’ the Communist Party from its earliest days. His brother David (see separate entry) was secretary of the Morning Star Co-operative Society; Ben was a Marxist tutor and an NUT activist.

Ted started work as an apprentice chemist and later was in the rag trade and active in Tailor & Garment Workers Union. He joined the Young Communist League at its foundation in 1922 and the Communist Party in 1923 and Ted Ainley was a member of the executive committee of the YCL for many years and its. He became full time YCL organiser, first in Glasgow and then in the North East in the late 1920s. s. In 1929 he went to Moscow to attend the Lenin School. Soon after the Daily Worker was founded in 1930, he joined its editorial staff and worked on the paper for a number of years.

In 1931 back in Manchester he was the organiser of an unemployed workers demonstration (7th October 1931) that was dispersed by fire hoses. During 1933-34 he worked in a left wing book shop, Books and Books, in Manchester. In 1935 he represented the Manchester branch of the Waterproof, Garment Workers Union on the local trades council. On the death of his local union secretary he was elected to the office but was not allowed to hold it because of his membership of the Communist Party. He later became a full time officer for the shop assistant�s union. In 1943 he became assistant General Secretary of Association of Scientific Workers and in 1949 General Secretary, a post he held until 1951, when ill health forced him to relinquish this position because of ill health.

He worked in the West Middlesex Communist Party bookshop from 1952-53 and then at the central propaganda department a CP headquarters at King Street. But it was as a speaker, especially as a teacher and educator, that he became known widely inside the Party. A classic worker-intellectual who mastered Marxist theory, especially economics, the hard way, he wrote many articles on this subject, edited the Communist Party’s Economic Bulletin for a long period and made himself an expert on the Common Market. He was editor of World News & Views from 1957-1962.

His talks and lectures on Marxist theory were reputably laced with great wit, and he was in very great demand as a tutor. He had wide intellectual interests, was a leading representative of the Communist Party in the 1960s dialogues with Christians. In the last few years of his life held a position in the’ education department of the Party.

His clarity and wit made him in great demand as a lecturer throughout the country. Ted Ainley died on 19th March 1968 aged 64

Ted Hollamby Born Edward Hollamby in 1921 in Hammersmith, where his father was a police constable, Ted studied architecture at the Hammersmith School of Arts and Crafts in the 1930s. Influenced by one of his favourite […]

Ted Rowlands    An engineering worker and shop steward for the AEU, Rowlands was an active Communist Party member in Newcastle.   He stood as the Communist candidate for a Newcastle Council by-election in St. […]

Ted Poole   A Swindon Communist activist who, after the Trade Unions Congress passed Resolution 42 in the early 1960s marking the fact that active trade unionists should be interested in culture, set up with […]