Leonora’s parents were Alfred (see separate entry) and Mary Ellen Comrie, foundation members of the Communist Party. Born around 1929, even in later life, Leonora remembered, “cringing, that she was sent to school with hammers and sickles embroidered on her smock”. 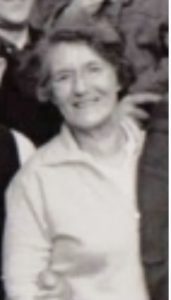 In 1947 Leonora joined the Nottingham East branch of the Young Communist League (YCL) and was the branch’s literature secretary. (She is pictured at a late-1940s Nottingham YCL gathering, see below for full picture.)

She married fellow YCLer, Pat Jordan, in 1950 and graduated from the Edge Hill teacher training college in Ormskirk, Lancashire.  Something of a complaint was that Pat did not win the Party’s nomination as a parliamentary candidate in the 1950 general election. The seat was contested by John Peck (see separate entry).

Leonora left the party in 1955, seemingly, “after a dream that the party apparatchiks had come to take her, and that her comrades had looked the other way”.

Pat Jordan became joint founders with Ken and Betty Coates of the Trotskyist Nottingham Group, later the International Marxist Group, but Leonora did not join them. Her marriage to Pat dissolved in 1958 and she later married Rodney Kay-Kreizman, with whom she had four girls, working as a schoolteacher in Merton, south-west London.

Leonora continued as an activist in a variety of fields – in the NUT, on Vietnam Solidarity, Greenham Common, and many other campaigns. She and Rodney separated in 1982 and Leonora died, aged 80, in 2009. 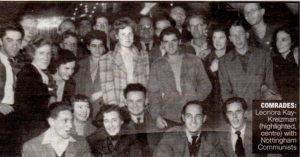 Alfred Comrie Born on 28th November 1887 in Nottingham, Comrie was a member of the SLP. He served in World War One and was a founder member of the Communist Party. He was married to Ellen Mary […]