Born 1 September 1913, Rosen was a Communist councillor on Stepney Borough Council. He first became well-known in the East End of London as an organiser of the Stepney Tenants’ Defence League (headquarters of which pictured below), which came out of rent strikes conducted from 1935 onwards. (Simon Blumerfield’s play “Enough of all this” is based on the strikes.) 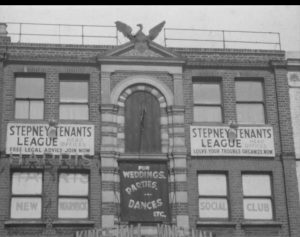 The leader of London Communists in this period, Ted Bramley, wrote of Tubby Rosen that he “was short but very broad, He was Jewish, with a round, chubby face, and a smile that never departed even when several thousands tenants were engaged in battle with scores of landlords, with himself as the focal point between the two. … Tubby Rosen … led innumerable rent strikes. The greatest epic of them all (at 21 weeks) was the fight of the (340) tenants of the Brady Street and Langdale Mansions, both owned by the same landlords, Messrs. Gold and Crapps”.

Other sporadic strikes at tenements such as Paragon Mansions in Mile End Centre ward saw the stance of the tenants “reinforced by ‘strong-arm’ men such as Maurice `Tubby’ Rosen”. The bailiffs and the police were held off and a partial victory won. 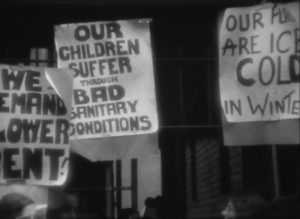 The movement grew rapidly, and the STDL, a federation of various tenants’ committees such as that at Paragon Mansions, was established in the autumn of 1937. Rosen was the second secretary of the STDL. By the end of January 1939, it had ten local committees, and could count on nearly 5,000 affiliated members.  Rosen announced that with thousands of tenants already refusing to pay rent, the big landlords were on the run. Then the onset of war in 1939 brought immediate rent controls which froze rents. The League had risen to contain some 11,000 members by 1940 and had two full time organizers, Harry Conn and Ella Donovan, both members of the Communist Party.

Tubby is pictured below in his office 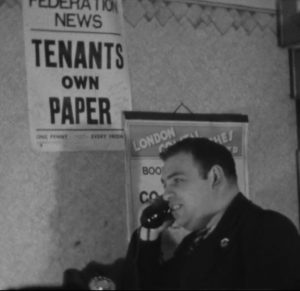 The Daily Worker of 20 March 1939 reported on the STL campaign for a new rent act, which was backed by a week’s rent strike by 100,000 tenants. At a conference in St. George’s Town Hall in Cable Street, Tubby Rosen showed how “the organisation had grown out of the needs of the people, who are paying half to a third of their weekly income for unsanitary accommodation, a menace to the health of all who are forced to live in the neighbourhood”.

A quarter of the population lived under overcrowded conditions, 6,000 basement rooms, officially condemned as unfit for human habitation, were let at exorbitant rents. Low paid dockers, in the docks, clothing factories and transport enterprises had no alternative but to live near their place of work. In these pre-NHS days, Stepney Council spent more than any other London borough on health services. But was unable to “overcome the evils attendant upon bad housing conditions”. Rosen painted a “ghastly picture of houses dripping with water, lack of lavatory and bathing accommodation, as contrasted with the luxury of owners hiding behind paid rent collectors”.

Astonishing sums of money had been recovered by STL for tenants from illicit excess rent charges, or in massive rent reductions, showing the level of “flagrant breaches of the law” by landlords, along with the “wholesale bullying and intimidation of tenants by their agents”.

The Daily Worker of 10 October 1939 reported that tenants of Evelyn House, Greatorex Street, Stepney, had begun a rent strike in protest against the lack of air raid shelters. Rents were to be paid into a central fund, managed by Father John Groser (1890-1966), a prominent Anglican priest and Christian Socialist who was a close ally of the Communist-led Tenants’ League, which had many supporters amongst the 15,000 persons accommodated in 240 tenements in the area. Groser was one of three radical priests in Poplar. 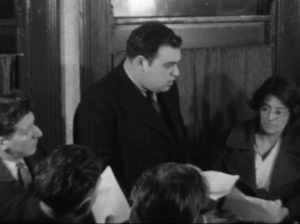 Rosen (left, at his committee meeting) made it clear that they were prepared to work with landlords who could not afford the cost of shelters, as the government should “primarily be responsible for this service”. Long drawn out discussions between the borough council and the government were imperilling the lives of tenants. Yet, in contrast, the League had already come to an agreement on a joint deputation to the council and the responsible minister with the landlord of Yorke Place, Limehouse, which housed 74 families. Whilst, after a two- week rent strike, the owners of Rutland and Bedford Houses, Christian Street, had agreed to a 15% reduction in rent all round and the building of shelters for the 60 families concerned. 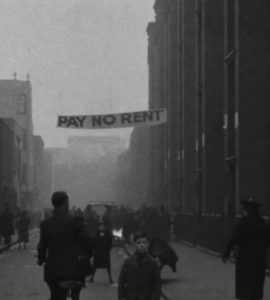 Communist strength in Stepney dated back to the foundation of the Party but it had been much boosted by anti-fascist work and taken to a whole new stage by the work amongst tenants, which was dominated by the boldness of working class women.  The first Communist candidate chosen to run for a borough council seat, in 1937, was Phil Piratin, who later became the MP for the area.

In May 1940 Tubby Rosen was spearheading 11,000 local tenants on rent strike, or threatening rent strikes, demanding a a substantial reduction in rents, which was ultimately won. The rent strike started at Riverside Mansions, spread to Hughes, Brunton, Regent, and Hardy and many other properties. (Daily Worker 14 May 1940) 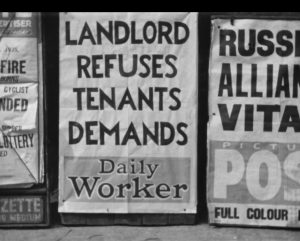 He was then the driver for collecting 15,000 signatures to secure Haldane shelters for Stepney, which would cost £10 a head, making each worth some weeks’ wages. The core idea of a Haldane shelter was a large communal shelter to be erected by the local authority, standing on the surface but massively  protected by concrete.

The petition also called for the removal of the ARP controller and restoration of health, education and social services. “Although we have done our part to bring about this great sense of responsibility on the part of local authorities, what is wanted now is the launching of a nation wide campaign demanding measures like the ones we are struggling like blazers for in Stepney.” (Daily Worker 24 May 1940) 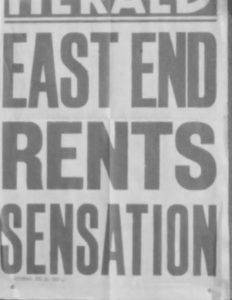 Then, as the Blitz intensified, Rosen addressed a large meeting in the Commercial Road and condemned the government for failing to provide deep shelters in Stepney. Common comment was that the government’s rich friends and their girlfriends had been provided with deep shelter cosy bedrooms in the comfort of a high class hotel and it was about time East Enders took them over.

He then led a march to the Savoy Hotel in the Strand with a half a dozen pregnant women at the head. The lobby was easily occupied and some descended to the underground shelters, converted from wine cellars.  Some went to the restaurant and ordered food.

The police, called to expel the occupiers, refused after Tubby pointed out that that the Inn-Keepers’ Act meant that as travellers they had a right to be served. Their point made, the managing director ordered tea be served to all the demonstrators. But press censorship meant that there was no public knowledge of the occupation at the time. But the incident laid the basis for the Communist campaign to open up the tube network after service hours as a giant air raid shelter to Londoners. 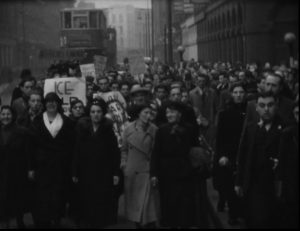 Still single at outbreak of war, Tubby lived with his parent and sister at 8 Newbold Street, Stepney, to the north of and parallel to Commercial Road.  The genealogical record is confused but it’s probable that he married Esther Hershkovitz in 1940.

Rosen served as a sergeant in the Royal Artillery in the Second World War but, by the time the war was over, Communists dominated the Stepney borough and could look forward to being elected as councillors. Tubby Rosen was selected to stand in Mile End West, with Phil Piratin and Tom Rampling in Spitalfields East, Edward Kirby and Michael Shapiro in St George’s North-West, Max Levitas and Queenie Weinberg in Whitechapel East, with Bill Carver and Fannie Goldberg in Mile End North.

All had been active in the struggles for better housing. When the elections came, in November 1945, all 10 Communist candidates won their seats, including Rosen. Three women were elected to the Stepney Borough Council along with four Jewish male Communists and three non-Jewish male Communists. All of them, including the non-Jews, won their seats in predominantly Jewish neighbourhoods. Many observers at the time asserted that the Communists could easily have taken 10-15 more seats than this but the Party had restrained its contests in the interests of left unity. 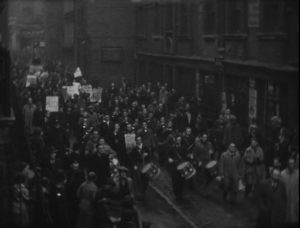 Rosen was one of the five Communist Party leaders arraigned at Bow Street magistrates court in 1946, charged with conspiring with others to trespass on property and aiding and abetting in directing such a trespass. The case arose out of the squatters movement, and in particular the occupation of the Duchess of Bedford House, Kensington High Street on September 8th 1946.

When the occupation began, the Times ran a headline: ‘1500 SQUATTERS OCCUPY LUXURY FLATS — AUDACIOUS OPERATION IN WEST END’. The Duchess of Bedford House in Campden Hill was invaded by some 200 squatters, after Communist organisers had discreetly arranged for the flats to be `opened’ and available for ex-servicemen and their families.

This was a block of luxury flats, halfway between Kensington and Notting Hill, with enormous accommodation, “more space than the average house”. Within the next week or two, other mass squattings had taken place, at Fountain Court, Pimlico, and elsewhere, But, since the Duchess of Bedford squat was the first, it was regarded as a legal test case, although the action was hugely popular.

The Ministry of Works had requisitioned the buildings, to house Maltese building workers, who were repairing bomb damage. They had all been moved on, and the place had been standing empty, but had not been returned to the original owners, possibly the Prudential Assurance Company, although due to adverse publicity, these denied all knowledge of the flats. Due to this confusion, the squatters were largely left alone by any authority for weeks. Attempts to turn off the mains supplies were thwarted by permanent picket duty rosters.

Then writs started to be served and the squatters’ own committee, which had been in negotiation for other accommodation, decided to recommend that the squatters leave voluntarily. The Communist Party organised a band to accompany a march to a fleet of coaches, which took the families to the now empty Old Workhouse at Bromley by Bow. In time, rehousing was won by all squatters.

The hearings at the Old Bailey from October 30th to 31st 1946 and the other Communists on trial were Ted Bramley, Joyce Alergant, Stan Henderson and Bill Carritt. (See separate entries for all.) Defended by Sir Walter Monckton, they were all found guilty, including Rosen, and bound over for two years. But the Labour government now felt obliged to speed up rehousing programmes. 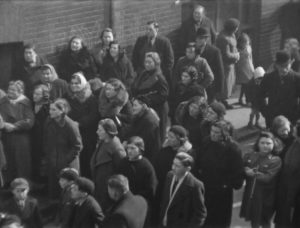 Harold and Connie Rosen Born in Brockton, Massachusetts to Jewish parents on June 25 1919. At the age of two, he came to the East End of London with his mother and siblings. His mother […]