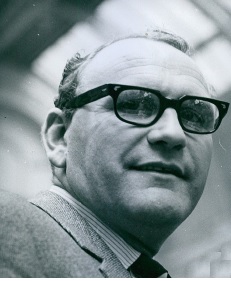 Growing up in Hartlepool, Norris was as familiar as the rest of his class and generation with poverty.  Having left school during the Second World War, he found work in steelworks locally.

After service in the Royal Navy, he did not take to life in the steel industry, Norris was offered attractive conditions being offered by the Royal Australian Navy, with free passage and a significant pension after only a short period of service. During this time, he began reading Tribune, the Communist Party of Australia’s newspaper.

After that, he worked as ship’s fireman on Australian coastal steamships, which brought him into the orbit of the communist ran Seamen’s Union of Australia.  While ashore recovering from an accident in which he suffered severe scalding in a ship’s engine room, he did voluntary work at the Tribune. A marriage break-up saw him returned to Britain in 1959.

After ship repair in the Port of London, he gravitated to the merchant marine a momentous development that saw him become a key figure in the National Union of Seamen’s strike of 1966.   At the point of the dispute, he had attained a key role in the Union’s negotiating machinery as a leading member of the national negotiating committee, even though he was not himself a member of the Executive Council.

The NUS was virtually a company union and none of its officials were elected by seafarers, who were effectively assimilated into corporate command structures, with the union maintaining strict discipline.  A multitude of unresolved issues and poor remuneration compared to increasing living standards in shore jobs all combined to create dissatisfaction among coastal cargo and short-voyage Liverpool liner crews.

In 1960, a rebellion had spread from Liverpool to other ports and a National Seamen’s Reform Movement had been set up. Little changed and a new push for change was underway, now involving Norris, who was advised by Bert Ramelson (see separate entry) to link up with other Party members in the NUS, notably Roger Woods in Liverpool and Alec “Spike” Robson (see separate entry) on Tyneside. It took incredible energy and much resilience to cope with the onslaught of opposition from within the union’s full-time, paid regime to develop a coherent rank and file leadership.

Norris was involved in a dispute in March 1965, calling for picket line action and serving on an unofficial London Committee then.  An attempt to expel him from the NUS failed.

In 1966, 20,000 NUS members struck for a 40-hour working week at the same pay and payment for weekend overtime. Owners say this would mean a 17 per cent wage increase. Norris had extraordinarily been elected from the floor of the Annual General Conference to an overseeing role. He was a “highly articulate and effective Communist”, according to the Earl of Longford in the debate on the Emergency Regulations made on June 22 1966. He certainly came across well on television and was more than a match for interviewers with insinuations.

Under the cover of pseudo-litigation, Longford made much of the fact that Norris, “in certain of his activities also operates under the name of Mr. George Goodman”. But this related only to a desire to prevent blacklisting in Britain for his union activities in Australia.

Famously, in late May, Harold Wilson, the Prime Minister, denounced Communists for using the strike to gain influence over the National Union of Seamen.  In naming Norris as the ring-leader, he said that a “tightly knit group of politically motivated men” were “endangering the security of the industry and the economic welfare of the nation”.

But the official record of Cabinet discussions, now available, shows that Labour ministers had deep sympathy with the seamen – whose ranks included the later deputy leader of the Labour Party, John Prescott, who wrote the manifesto.  In Cabinet they even admitted the strike had been precipitated by the shipowners. In private they said the finding of the court of inquiry into the strike – which the government backed in public – gave the seamen less than they deserved.

Wilson had been warned that Gordon Norris, was seeing Bert Ramelson, daily “to plan the next move in the strike and the outcome of discussions at the executive of the National Union of Seamen”. The PM offered the briefings to the Opposition.  These also included information from an agent inside the National Union of Railwaymen.

That Norris’ role was especially feared became clear when Norris addressed a Trafalgar rally of thousands of strikers during the fourth week of the dispute, calling for the cutting off the nation’s oil supplies.  Norris urged that all tankers entering Britain be blacklisted, which would certainly mean that Australian waterside workers would refuse to handle any tanker cargoes that visited there bound for or from Britain.

The likelihood of the ban being enforced strongly in the Asia Pacific region was worrying to the government. Such an embargo would certainly mean petrol rationing within a couple of weeks. Norris’s personal connections in Australia was at the heart of the government’s worries.

The Labour government’s statutory prices and incomes policy, which seemed more about the latter than the former, did not help.  Especially after the tame NUS leadership had accepted a 56-hour week, up from a 44 hour, previously won in 1961.

Gordon Norris remained faithful to his political and trade union outlook and died at the age of 87 in 2015.

Gordon Ashberry Ashberry was born on December 16th 1923 and became a skilled engineering worker and a member of the Communist Party in Sheffield.    He married in September 1956. Ashberry was candidate in the […]

Gordon Jenkins Councillor Gordon Jenkins was a Neath butcher who became an elected Communist councillor. He was a member of the Union of Shop, Distributive and Allied Workers and a delegate to Neath Trades Council. […]