Elsie Cox, was born on the 12th August 1915, the youngest of five children to a staunch socialist family. (Elsie is pictured in the featured image in her later years) Her parents were Communist Party members from its earliest days and her eldest brother, Arthur, was active in the National Unemployed Workers Movement and, along with her sister Bessie, was a founder of the Young Communist League.
Elsie had rheumatic fever at the age of eight, which left her with a permanent heart condition. She was obliged to spend lengthy periods in bed recuperating, which she spent reading, mainly 19th century novels and poetry. At twelve years of age, she took up the piano, eventually qualifying as a piano teacher passing the LLCM examinations as an external student.
Elsie herself joined the Communist Party in 1936 and was active in work associated with the Spanish Civil War and, later, the Birmingham tenants’ strike of 1939. That year, she married Martin Marshall, then a GWR railwayman, and they volunteered to form a workers choir, when Dr Colin Bradsworth (see separate entry) called for volunteers at a Daily Worker social. Bradsworth introduced them to the songs he had heard during the Spanish Civil War but before long the range of the group was vast.
The piano was played by Jock Leishman (see separate entry). The first song rehearsed was the “United Front Song”. The choir first met in the Old Contemptibles pub in the city centre and its first known concert was given to a Tenants Association audience in the Co-op hall of the Birmingham suburb of Yardley Wood.
The name of the choir was later adopted as tribute to the work of Dr Bradsworth, recalling his fond membership of Clarion Cycling. Clarion performed in air raid shelters, factory canteens, on bomb sites and in New Street’s Big Top – a circus and fairground set up on a bomb site –  as part of the `Holiday At Home’ scheme.
Elsie and Martin Marshall gave joint performances as Figaro and Susanna, Papageno and Papagena, MacHeath and Polly, Master and Mistress Ford, which were highly acclaimed. The couple went on to have two children and, through them, five grandchildren. 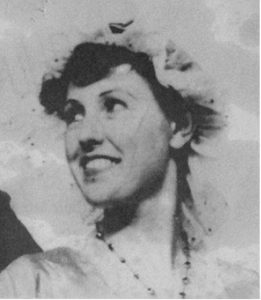 At the end of world war two, they were invited to join a professional opera but declined, preferring to stay with Clarion. They were to devote the rest of their lives to this progressive choir, which acquired a high regard for the outstanding musical quality of their amateur productions and continues to this day.
In addition to her amateur, but highly talented, role as a singer, actress, choreographer, vocal tutor and conductor, in 1966, Elsie became a music teacher at Wyndcliffe Junior School, an expression of her dedication to disadvantaged children. 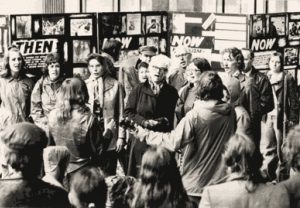 Pic: The Birmingham Clarion Singers in the 1970s
Martin Marshall (see separate entry) died in 1984, not experiencing the debacle that befell the Communist Party over the next few years but Elsie remained loyal to both the re-founded Communist Party and the Morning Star. Elsie herself died at the age of 93 years on 22nd March 2008.
Sources: funeral brochure and: http://www.clarionsingers.org.uk/home.html

Elsie Oliver Elsie Oliver was born Elsie Cousins in Woolwich on 30th October 1929, the daughter of Jimmy and Alice Cousins. (Elsie is pictured with an original copy of the Daily Worker from her father’s […]

Martin Marshall Left: Martin in 1944 with his wife Elsie, him as MacHeath and her as Polly, in a production of the Beggars'  Opera. As a young man, he could have had a career in […]

David Marshall David Ronald Marshall was born on March 27th 1916 in Middlesborough, to a railway worker father and a mother who had been a lady’s maid. Both parents were committed Methodists and well-read individuals, […]