An International Brigader who became rather famous in the 1966 seamen’s strike, Jack Coward was born in the Lake District in 1905. At the age of 9 his family moved to look for work to Liverpool, settling in the Brownlow Hill area. There, Jack went to Pleasant Street school and as soon as he was able to became a merchant seafarer.

All his life, he was an active trade unionist and life-long member of the Communist Party. Like many of his generation, he was active in the National Unemployed Workers Movement and in street battles with the British Union of Fascists. He was also involved in smuggling fleeing anti-Nazis into Britain. 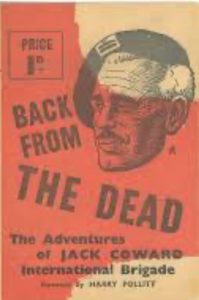 In November 1936, he left for Spain to assist in the civil war, joining the republican navy in Cartagena. He was later sent to officer training school and on graduation, he was sent to join the No.4 Company of the British Battalion. Coward was captured and imprisoned by the Franco forces for a period. On his return home, Jack wrote his ‘Back From the Dead’, about his time in Spain and published in 1939 by the Daily Worker under the Workers Press imprint.

He remained active in the National Union of Seaman, becoming a significant rank and file leader in Liverpool and beyond in the post-war period. Jack Coward also stood as a candidate for the Communist Party in Liverpool local elections.

He was the author of the 1966 Communist Party pamphlet “We want 40 – the case for the seamen”, and the Chair of the London strike committee in the 1966 dispute, becoming named by Harold Wilson as one of the `tightly-knit group of politically motivated men’. 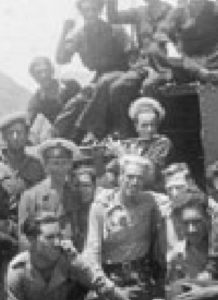 ic: Coward is front, fourth left, pictured with sailors of the Spanish Republic in 1937.

THE EARL OF LONGFORD moved, That the Emergency (No. 2) Regulations 1966 made by Her Majesty in Council on June 22, 1966 under the Emergency Powers Act 1920, and laid before the House on that date, shall continue in force subject to the provisions of Section 2(4) of the said Act. The noble Earl said: My Lords, on behalf of my noble friend Lord Stonham …..

The central figure in the operation is the Communist Party’s industrial organiser, Mr. Bert Ramelson, who in January succeeded Mr. Peter Kerrigan. Mr. Ramelson has three full-time officials on his staff, and in the London area, where the docks provide his hunting ground, his principal lieutenant is Mr. Dennis Goodwin. Round this full-time nucleus has been gathered a small group of active trade unionists in the National Union of Seamen and other unions … active roles in the country’s two major ports, London and Liverpool, were taken by two dedicated Communists, Mr. Jack Coward and Mr. Roger Woods.