Mick Costello’s father, Paddy, was a remarkable New Zealander of left-wing views, born in Auckland on 31 January 1912, who became a career diplomat. His mother, Bella Lerner, was born and brought up in the East End to a family with a Jewish Ukrainian background. They, and she, were very much part of the strong community support for the Communist Party in that part of London in the 1930s.

The course of Mick Costello’s life was surely moulded by his parents’ views and much that happened to them, in particular, his father.

Virtually self-educated and with a natural flair for languages, as a young boy Paddy Costello taught himself Latin and Greek from library books, Gaelic from his Irish relatives and local dockers, and French and Italian somehow. Later he would add Russian, Persian and several more languages and win a string of scholarships to become a classicist at Auckland University.

Paddy came to Britain in 1932 to take up a scholarship at Trinity College and, by 1935, had joined the British Communist Party. He met and married Bella Lerner within three weeks of meeting her that same year and their son, Mick, was born in 1936.
The following year, Paddy Costello (pictured below in India) acted as a courier for the British Communist Party and carried the equivalent of $30,000 to its sister party in India but his involvement in such work soon faded. 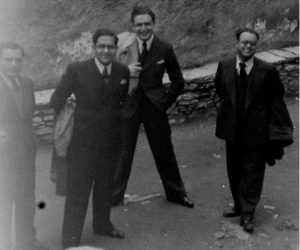 Indeed, Paddy left the Communist Party in 1939 but Bella remained a Communist all her life. He went from teaching ancient history in Exeter the following year to being offered a job with the New Zealand legation in Moscow in 1944. This arose perhaps in part due to his wide command of languages and in full knowledge by the New Zealand government of the time of his still left-wing views. Paddy’s wife and son went with him.

Despite being a diplomat’s son, Mick was not sent to an international school, as was commonly the case but, from the age of nine to fourteen, went to an ordinary school in Moscow where he became fluent in Russian and familiar with the culture of the country in the period between the great victory over fascism to the height of the cold war.

There was widespread acceptance that Paddy Costello was one of the most talented and effective members of the diplomatic service in Moscow but this did not prevent his time there ending in 1950. In 1954, he was moved to his last, brief, diplomatic posting in Paris. Then the British secret service persuaded a new Conservative government in New Zealand to dismiss Paddy without any explanation. He became professor of Russian at Manchester University.

Despite having once been widely smeared as a spy over the past half a century, it now appears that Paddy Costello was set up by MI5, which was smarting at a Soviet intelligence coup that had revolved around the legitimate issuing to one of their agents of a New Zealand passport by the embassy there, even though Paddy Costello had absolutely nothing to do with the affair. Paddy died in 1964 of a heart attack at the age of only 52. [See James McNeish “The Sixth Man: the Extraordinary Life of Paddy Costello”, Vintage New Zealand]

In 1955, Mick Costello began studies at Manchester University and won an election against Anna Ford, later the well-known TV journalist, to become the President of the Students’ Union there. He joined the Communist Party during 1956 and continued to play a leading role in the Party’s students’ work until his involvement in Soviet economics in the 1960s, after which followed a period in Communist journalism. In 1969, the British Communist Party published Costello’s “The Communist View”, a sweeping outline of the basic position of Communists. He published his “Workers’ Participation in the Soviet Union” in 1977, through Novosti Press.

In 1979, Mick Costello was elected by the Communist Party EC as the successor to Bert Ramelson, the Party’s Industrial Organiser – the main official responsible for work within trade unions. In the run up to this period, and beyond, many in the media came to know of the highly effective role Costello played in this role. It was often noted in the press, ominously so, that he spoke fluent Russian and was brought up in Moscow. At one point the SunBritain”. called him “the most dangerous man in

In 1982, Costello wrote the Party’s pamphlet on the main Tory anti-union legislation, “Tebbit’s Bill – Kill it”. But, by now, he had found himself being isolated and attacked by the small clique of “Euro-Communists”, or revisionists, who had become influential at the highest level. He and Martin Jacques, editor of “Marxism Today went head to head in 1982 over a scurrilous attack on the shop stewards’ movement in that journal.

As the rising tension within the Party’s leadership seemed about to come to a head, Costello decamped from the Party’s head office, without formal permission to do so, to become the full-time Industrial Editor of the Morning Star. Within two years the entire paper’s leadership was being confronted by the Euro-Communists who had now technical control of a majority of the Party’s EC. Pete Carter replaced Costello as Industrial Organiser. Carter would go on to write a pamphlet that was so scathingly critical of the NUM’s leadership during the 1984-5 miners’ strike that even the CPGB leadership, now more liquidationist than it had ever been, suppressed it.

Mick Costello played a vital role during the miners’ strike, not just in making the Morning Star virtually the paper of the dispute but also in guiding a number of that special breed of journalist, the industrial correspondent, into a proper understanding of the subtleties of events and personalities. Interestingly, in subsequent years, the role of industrial correspondent was virtually ceased in journalism.

In time, Mick Costello left working for the Morning Star and became much involved with promoting economic contact with Russia during the 1990s. In more recent years, he has returned to academic work and joined the re-founded Communist Party of Britain in 2008.

Mick Connolly Mick Connolly was one of five children born to Ellen and Danny Connolly, the latter being a Communist Party member. During the tail-end of the Blitz in 1941, Ellen moved her children to […]

Mick Kane Kane was the brother of Jock Kane and uncle to Bridget Jones (see separate entries), and he was also a Communist and a miners’ leader. Pic: Mick Kane is in the centre of […]

Mick Bennett Bennett was a precocious, yet senior, Young Communist League activist from his youth. He was subject to intense MI5 scrutiny from 1932, possibly for the rest of his life. This largely began as […]