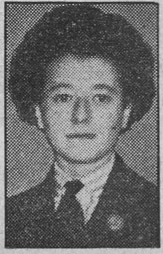 Born around 1918, Joyce Alergant left school at the age of 14 to work as a shop assistant. After a period of unemployment, she worked in a Liverpool slum area where she saw wretched housing conditions and poverty. In 1938 she joined the Communist Party, worked for the Aid to Spain Movement and helped organise supplies to Chinese war orphans. At the outbreak of the Second World War she joined the Red Cross and served in a Military Hospital, nursing the wounded from Dunkirk. Blitzed from her home she moved to London and worked at the Ministry of Supply.
She graduated from Liverpool University and subsequently became one of a number of Westminster City Council Communist Councillors in 1945, including Dr Joan McMichael and Bill Carritt. As a Councillor, she secured big concessions for Peabody tenants in the Covent Garden area – her ward - in September 1946.
In an interview with Hetty Rayner, women’s editor at the Daily Worker, in late 1946 Joyce summed up the work of Westminster Communist councillors, “… the rent reductions and decreases we have managed to achieve, amount to a total of £4,500 (close to half a million pounds in today’s money). Some tenants in bombed houses have had a reduction of as much as 16s per week.”
Joyce was one of five Communist Party members charged with “conspiracy to incite and direct trespass” because of their role in securing homes for bombed out and newly demobbed men from the army through the mass occupation, or as we would say today `squatting’ of empty housing. She was most involved in the famous occupation on Sunday 8th September 1946 (in pouring rain) of the empty seven story luxury flats at the Duchess of Bedford House and Melcombe Regis Court, in Kensington, West London. The other four Communists on trial were: Ted Bramley (London Communist Organiser and Communist LCC Councillor), Maurice “Tubby “ Rosen (Communist Councillor Stepney, Stan Henderson (Communist Organiser Hammersmith) and, Bill Carritt (Communist Councillor Westminster).
Joyce recalled that one squatter, who had been sharing a dilapidated house with seventeen other people, told her “I clutched at the prospect of a new house as a drowning man clutches at a straw.”
As the squatting movement spread across London and Britain, Nye Bevan - the Minister responsible for housing - feared an outbreak of “prairie fire” occupations. Writs against the five were secured on September 17th. At her formal appearance at Bow Street, Joyce as the only women on trial, was separated from the men and placed with a large group of “regular prostitutes and habitual drinkers”. The case was referred to the High Court. Joyce was under no illusion that, as with so many other Communists, she could face a two-year jail sentence, a prospect she did not relish at all.
On the first day of the trial at Old Bailey on Wednesday 30th October 1946, Joyce was presented with a large bouquet of chrysanthemums by supporters, which were immediately confiscated by the “sour faced” wardens. On day two, Thursday 31st October 1946, the jury found the five guilty on all counts but also secured the minimum penalty of a two year suspended sentence.
The Judge Stable passing sentence stated “I am satisfied that the motive was primarily to find houses for the unfortunate people and I am satisfied that what stimulated your action was a genuine sense of distress at the predicament in which these people found themselves” (Daily Worker 1st November 1946)
The Squatters’ movement forced the Government and local councils to start to requisition empty property for housing working people.
I feel sure that Joyce was related to a Mr Alergant, who in 1904 was the owner of a tobacco shop on Brownlow Hill below Clarence Street where Jewish socialists used to gather and interestingly was close to Liverpool University, where Joyce went to University.
Michael Walker
Source: Our History - London Squatters 1946 by Noreen Branson

Joyce Miller Joyce was born in Portsmouth in 1920 and, in her youth, first joined Portsmouth’s Labour League of Youth and then the Young Communist League. She joined the Communist Party in 1939. She […]