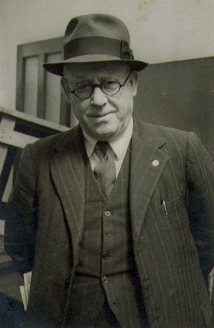 George Sutherland Aitken, an engineering worker by trade, attended the Lenin School Moscow in 1927 and a member of the Central Committee from 1931.  With the onset of fascism, and an increasing danger of war, by the middle of the 1930s, he was active in working with the Comintern to assist the British Communist Party prepare for a possible eventuality of having to engage in underground activities. This work was believed by MI5 at least to include propaganda, the collection of military information and planning for sabotage acts.

But little of this suspicion was well established in the terms in which it was thought of by the security forces. Though, certainly, following the Meerut trial of 1929-1933, which concerned British Communist efforts to assist in the organization of trade unions in India, Aitken was involved, with Harry Pollitt, in finding a solution to the intractable problem of finding a way of keeping contact between themselves and India. They hit on the means of infiltrating a reliable person into the armed forces, who would be posted to India. If this was subversive, few would now consider it to be entirely malevolent, though it was certainly aimed at striking a serious blow to the British Empire.

George Aitken was responsible for work within the armed forces and the had a duplicated paper called `Soldier’s Voice’. He made significant efforts to send this direct to soldiers via the electoral register, which then gave details of where soldiers in service were stationed and what their regiments were.

One 1930 leaflet, `We Must Not Murder the Workers and Peasants of India’  was ingeniously concealed for use inside the forces by folding it in a brown envelope printed as `Lee’s Tip for The Derby’! There was also ` The Red Signal’ and `Sailors Look Out for the Right Road’. The early sheets were cyclo-styled with amateurish cartoons but by the later 1930s, as with `Guide to Armageddon’ in 1937, pamphlets were being produced with black and white photographs.  Though it is likely that Aitken was no longer handling this work at this time.

He appears to have been close to J T Murphy, or at least sympathetic to, the mildly bizarre course followed by him over attitudes to the Labour Party. Whether this was also associated with the foregoing is unclear but, at some point, Aitken appears to have been sent to act as district organiser of the Communist Party.in the North-East of England. But, by 1937, Aitken was sent on the high profile and vitally important mission to be political commissar to the XVth International Brigade in the Spanish Civil War, although he seems to have returned somewhat under a cloud.  Perhaps this was somehow due to the temporary battalion commanding officer position he was given due the injury of the incumbent.

Despite the high principle with which Aitken now surrounded himself, it is difficult not to wonder whether the high promise as a Communist leader that George Aitken had appeared to show had never quite come to fruition – and to ponder just why that was so. Always leaning towards what might be called (albeit rather imprecisely) the `pro-Labour’ wing of the Communist Party, Aitken had become close to J R Campbell after J T Murphy’s departure from the Communist Party.

Aitken claimed, in retrospect, that Campbell had only stayed in the Party in 1939 as he had personal fears for the safety of a step-son who lived in the Soviet Union. Campbell’s future course compared to Aitken’s suggests, rather, that more politics and less personal considerations were, in fact, at work with one of the men at least!  Whether this is a justified conclusion or not, the fact is that Aitken and his wife, Agnes Lachlan Aitken, resigned from the Communist Party in 1940, at the height of the work for the anti-war Peoples’ Convention. Although Aitken’s trajectory actually began with opposition to the Party’s finally resolved line over war in September 1939.  Again, the timing raises questions about George Aitken’s style and motivations.