Bernard Emile Vivian Burns was born on 16 April 1889 in St Kitts in the then British West Indies, the sixth child and the fifth son of James Burns, the Harbour Master and Treasurer of St Kitts and his wife Agnes.

A distinguished establishment family, one of Burns’ brothers was Sir Alan Cuthbert Maxwell Burns GCMG, Governor of the Gold Coast (now Ghana) from 1941 to 1947, Permanent UK Representative on the United Nations Trusteeship Council from 1947 to 1956 and author of a number of books on the British Empire, including History of Nigeria, Colonial Civil Servant, Colour Prejudiceand History of the British West Indies.

His eldest brother, Dr Cecil Delisle Burns MA DLit, who was educated at Christ’s College, Cambridge, was Assistant Secretary of the Joint Research Department of the TUC and Labour Party from 1921 to 1924, lecturer in Logic and Philosophy at Birkbeck College from 1925 to 1927, Stevenson Lecturer in Citizenship at Glasgow University from 1927 to 1936 and author of Political Ideals: their nature and development.

Emile went to Trinity College, Cambridge, where he was awarded a first class honours degree in moral sciences. During the First World War he sat on a committee of inquiry into poverty in Britain that was established by Eleanor Rathbone, a stalwart of the National Union of Women’s Suffrage Societies, which led to the Family Endowment Committee. In 1917, this published Equal Pay and the Family: A Proposal for the National Endowment of Motherhood. Essentially, this was the start of the notion of child benefits.

A family document indicates that Emile joined the Communist Party in 1921 and confirms that from 1921 to 1929 he was secretary of the Labour Research Dept, except during the General Strike of 1926, when he worked with the St Pancras Trades Council as Propaganda Secretary. Submit

He served on the Communist Party Executive Committee (or Central Committee before that) for very many years and was a prolific writer and educator for the Party. His wife, (Margaret) Elinor, joined the Party in 1923, served it in a variety of official positions and was an active Co-operator.

The couple were to have two daughters – their first was Susannah, born 11th September 1914, died 12 June 1996. Marca was their second child, later well-known in some circles as the geneticist, Dr Marca Burns (born 4 January 1916 died 29 April 2008). Marca retained links with the refounded Communist Party, despite her advanced age she wrote a piece on Engels, food and the environment in Communist Review in 1991 that would have greatly interested her father.

Emile was involved with St Pancras Strike Committee during the General Strike of 1926 and more famously produced a major report on the work of Trades Councils in this event. In 1932, Burns found himself heavily involved in the organisation of Party groups amongst London bus workers after he held a number of education classes for them. He was the subsequent author of a large number of Marxist education syllabi but the main consequence was the Burns ended up being the editor of a rank and file journal started mainly by Communist bus workers, called the Busman’s Punch. This was so popular in the 1930s that it reached a circulation of 30,000 copies.

Emile Burns was a key behind the scenes figure, working with Harry Pollitt, in developing the Left Book Club with Victor Gollancz from 1936. Emile Burns played a major role in bringing forward a huge number of books which were specifically aimed at British audiences. 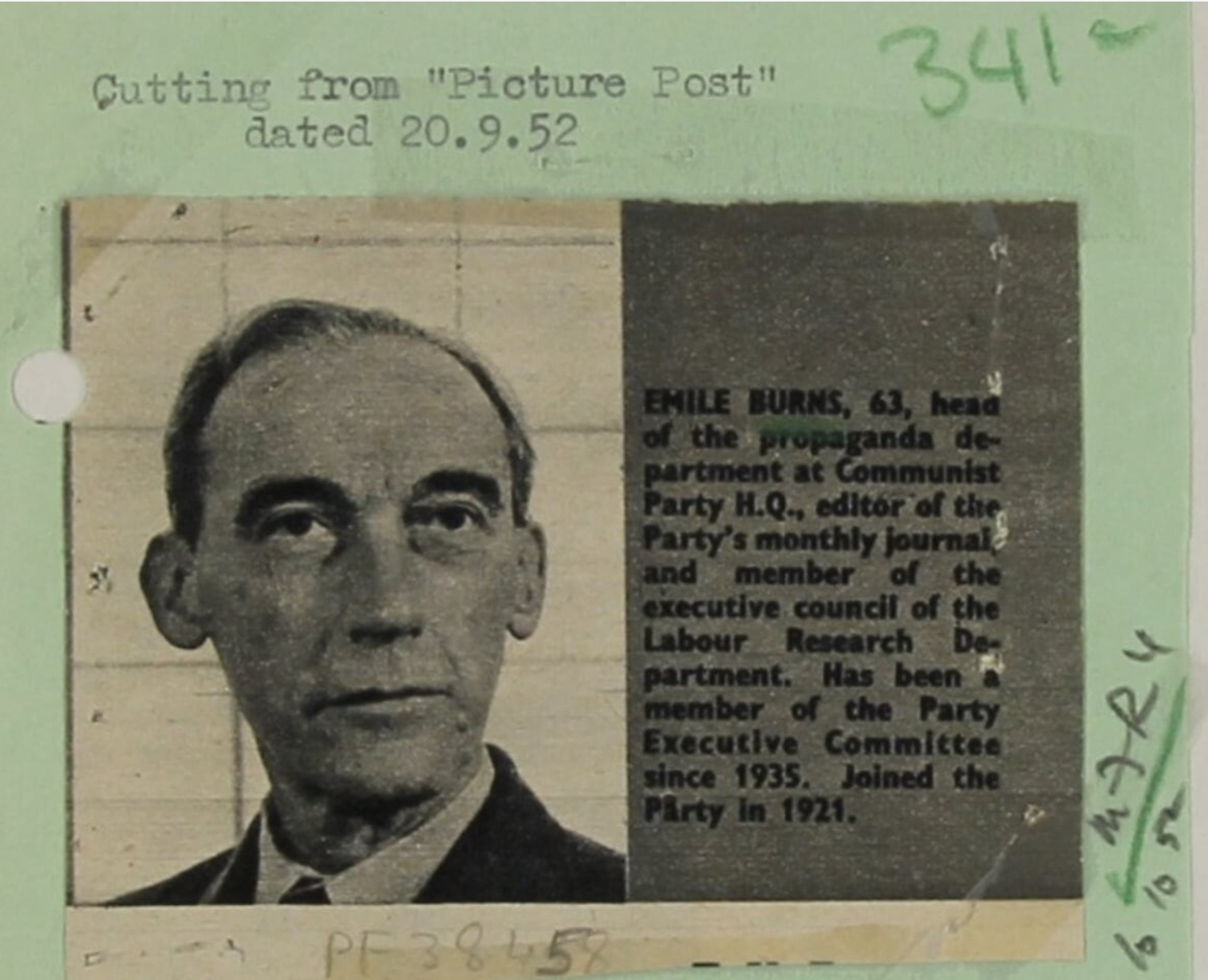 Indeed, Burns was always closely associated with Harry Pollitt’s leadership, as became clear during the debates over the character of the war in 1939. Before Pollitt voluntarily relinquished his responsibilities as General Secretary he had been backed by Burns in the Political Bureau along with Willie Gallacher, JR Campbell, and Ted Bramley. Burns was especially critical in the Central Committee of Raji Palme Dutt’s handling of the whole matter.

During the Second World War both Elinor and Emile, considered by the first biographer of Eleanor Rathbone to be “both good feminists”, joined up with the pioneer suffrage campaigner to once again investigate women’s pay and the family wage. The final report touched on the question of equal pay for equal work’, especially regarding the struggle of women bus conductors for this. Clearly, Emile had not lost his old contacts! The case for direct provision for the family was illustrated “with statistics assembled under the expert guidance of Emile Burns”. From this there emerged a concrete scheme for the payment by the State to all mothers of the scale of allowances then in force for the wives of Service men. 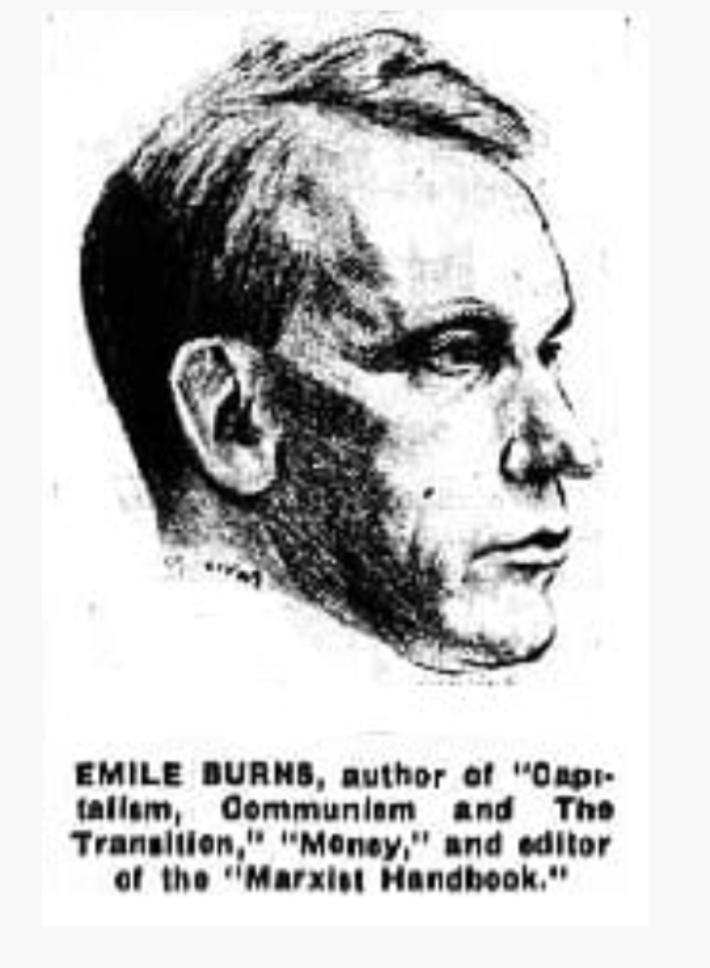 In the immediate post war period, Kwame Nkrumah, who was to become the first leader of an independent Ghana in 1957, was close to Burns, after he arrived in London in May 1945 intending to study at the LSE. In his autobiograhy, written much later, Nkrumah refers to Burns as a “close friend” and it is clear the relationship was both long-lasting and of political significance. Burns was the Presient’s guest at the independence celebrations. This close and enduring friendship was not excluded to a handful of potential leaders. In the late 1940s Emile Burns, was holding classes on Marxism for over forty West African students in London.

SubmitFrom 1947 Emile Burns chaired the Communist Party’s National Cultural Committee. Some commentators on this period, which was one that led to sharp internal differences, have drawn Burns’ role as NCC chair rather negatively. It may surprise some that Emile had been strongly supportive of the Popular Front, critical of the Party swinging behind the Soviet line in 1939, personally supportive of anti-imperialist leaders from black Africa, and was highly regarded by Britain’s left wing and liberal intelligentsia as a creative Marxist. None of this adds up to the picture of a Stalinist bureaucrat painted by ultra-leftist and revisionist critics of Burns.

He was editor of the Party’s theoretical magazine from 1948 to about 1955 and edited the Marxist Quarterly from about 1954. This had been Modern Quarterly, published by Lawrence & Wishart but unambiguously a Party publication and it had been edited by John Lewis. Some dissatisfaction arose amongst many of the Party’s intellectuals about the quality of debate within in and, in 1954 it became the Marxist Quarterly, edited by Emile Burns. Contributions from serious Marxist intellectuals, Party and non-Party, including Bernal, Burhop, Berger, Dobb, Hobsbawm, Hill and others were attracted to write for it but the events of 1956 somewhat dented the project. Nonetheless, by this stage, Emile was more or less in complete charge of the Party’s education, propaganda, and publications, with James Klugmann as his deputy. It was in fact around this time that Emile reached retirement age and Klugman succeeded to a role more or less carved out by his predecessor as the Party’s main full-time intellectual.Submit

Emile Burns’ real memorial is the fact that his Introduction to Marxism still serves today as a basic text for new members of the Communist Party. He died in February 1972 and the following details most of his known, many published works: see below.

PUBLISHED WORKS OF EMILE BURNS (pic: Emile in the 1960s)

1927 Imperialism – an outline course for students and study circles

1930 A Certain Jesus: The Gospel According to Thomas by Ivan Naschiwin (as translator) Submit

1933 Capitalism, Communism, and the Transition

1936 France Today and the People’s Front (with Maurice Thorez)

1936 The case for affiliation

1940 The Soviet Union
and Finland

1944 Jobs, homes, security: post-war Britain and the way to socialism –
syllabus based on a book by Harry Pollitt

1946 The story of capitalism

1949 Some aspects of Lenin’s contribution

1950 The Meaning of Socialism

1950 The Soviet Transition from Socialism to Communism

1952 Theories of Surplus Value: Selections from Marx (with G A Bonner)

1953 The new stage in the fight for peace

Elinor Burns Born in Sutton Bonnington, Loughborough, Elinor Burns (1887- 1978) was active in the labour movement from 1917 when she joined the Independent Labour Party (MI5 files KV2/1763). In the period immediately before […]