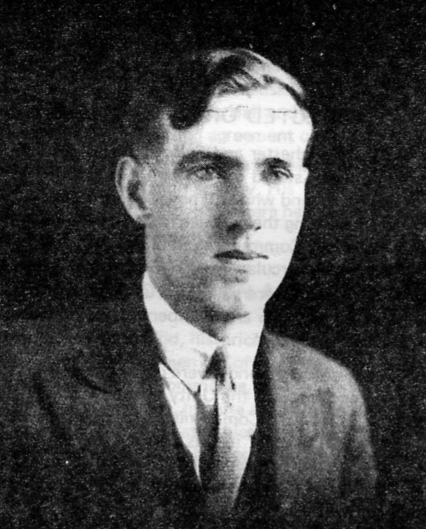 George’s parents, Frances Brown and Mary Lackey, migrated from Kilkenny to Manchester in the closing years of the 19th century and married there in May 1897. The fourth child in the family, like all of his siblings but the fifth and last child he was actually born in Ireland on one of his mother’s lengthy trips back home on 5th November 1906 in the village of Inistioge, Thomastown, County Killkenny.

Taken back by his parents into emigration to Manchester, where they might find work, he became a popular figure. He was a member of the Hugh Oldham Lads Club, an all-round sportsman, being a winner of the Metro-Vicks Works Sports in running and walking and also a good boxer. His father worked as a farrier for the railway company, and was a staunch trades unionist. The family lived in Collyhurst, part of what had been until recently the independent township of Harpurhey but was now part of Manchester.
George left school at 14; as a hobby, he found himself attending the Queen’s Park Parliament, a large hall owned by the Manchester Corporation that housed this debating society. Debates involving over 400 people were common. George joined the Communist Party during the 1926 General Strike. For a year, he worked for the Vaughan Crane Company at Gorton; then he had spells at Metropolitan Vickers in TraffordPark, the Corporation Highways Dept and as a building site labourer. In his work at Metro-Vicks and the Manchester Corporation Highways Department he was an active trade unionist, all the time maintaining his connection with the Irish Clubs in Manchester.
He became a member of the Manchester and SalfordTrades Council and was a leading figure in the unemployed struggles of 1931. That year, George was the “stand-in” candidate for Chris Flanaghan, who was the Communist candidate in the Openshaw constituen 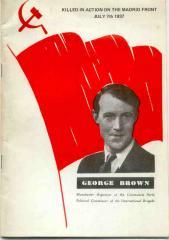 cy but who was in Strangeways Jail serving a five month sentence arising out of an unemployed demonstration. Immediately afterwards, George was sent to the Soviet Union for a period of twelve months to the LeninSchool in Moscow.
Brown became an inveterate campaigner for the Communist Party as the Manchester District Organiser. In November 1933, he was the Communist candidate for Collyhurst ward and, in 1934, he was a Communist candidate in Manchester’s Openshaw ward and shortly after was to marry Evelyn Mary Taylor. His enthusiasm regularly saw him drag a horseless lorry, which would serve as a platform, on to Albert Croft for Sunday morning open-air meetings. Brown was elected to the central committee of the Communist Party in 1935.
In January 1937 he departed for Spain and was a Political Commissar of the International Brigade. In this role, his extraordinary energy would see him spend his days off duty from the Commissariat during the Jarama campaign in the trenches. Eventually, Brown was allowed to join the Battalion in action but was sadly shot on July 7th 1937 by Fascist troops as he lay wounded by the roadside when engaged in action on the Madrid front during the battle for Brunete, which alone cost the British battalion nearly three hundred casualties. He had taken part in an assault on the town of Villaneuva de la Comadea, a highly fortified position surrounded by trenches and well-placed machine gun nests. A funeral procession for Brown’s body was held in Madrid, at which delegates to an International Writers’ Congress, then being held in the city, marched.
His widow Evelyn Taylor, in a letter to the Daily Worker after his death, wrote that: "His whole life was devoted to the working class struggle and to the Communist Party, which he firmly believed was the only party that could lead the workers to socialism. He went to Spain because he knew that, if we allowed fascism to conquer in Spain, very soon we should be having to face the guns of fascism in England." In 1938, Jack Jones, later to be the general secretary of the T&G, married Evelyn and they shared 60 years together until her death. On the opening of a dedication to George Brown in his native village, Jack Jones, himself a veteran of Spain and life president of the International Brigade Memorial Trust (IBMT) spoke of how loved and respected George had been and how powerfully his cherished memory had lived on in his and Evelyn’s home.
Amongst the sources was “George Brown” North West Communist Party History Group (pictured – circa 1972?) and Morning Star 22nd July 2008