Originally an activist in the Nottingham Young Communist League, Allen was involved in the late 60s in a stunt that saw the flag of the Vietnamese National Liberation Front hauled up Nottingham castle.

Within a short period, Allen became the full-time London District Secretary of the YCL and as such was heavily supportive of the revisionist trend within the national leadership of the YCL.  In this period, Allen lived in Hayes, West Middlesex. In the late 1970s, he stood as a Communist Party candidate for Botwell ward, Hayes, in the London borough of Hillingdon (thanks to Michael Walker for the contemporary candidate picture – see right below – from the local press).

Allen supported the CPGB EC in its assault against 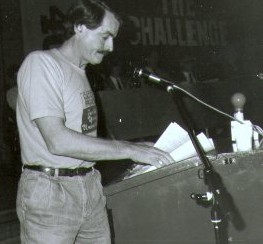 In the Noughties, Allen was President of the Community and Youth Workers Union (CYWU), which later was to merge with the T&G and is now part of the Not-for-Profit sector of Unite – the union.

Bob Jarvie  Jarvie was an active Communist Party member in Croydon in the 40s and 50s. He stood for the "working class" constituency of  West Croydon in the 1950 general election. He wrote in World News in late 1949 that: […]

A brief biography of Bob Davies by Graham Stevenson additions and corrections welcomed: info@grahamstevenson.me.uk Born in 1901, Bob Davies, of Bolton and St Helens, was a foundation member of the Party.  He left school […]

Bob Darke   A bus conductor who joined the Party at the age of 22, Darke is most known as the former elected Hackney borough councillor for the Communist Party, who turned on the Party. […]