Born in January 1914, Jimmy Prendergast started his working life by being an art critic in a Dublin newspaper. He was a member of the Workers’ Union of Ireland and joined the Irish Worker’s Group, a precursor to the Communist Party of Ireland in 1932 and studied at the Lenin International School in Moscow in 1934 after which he joined the British Communist Party while working in London.

Jim volunteered to join the International Brigades fighting against fascism in Spain, arriving there on 12 December 1936.   Almost immediately he was thrust into military action in Lopera in Cordoba, when the XIV International Brigade, which had no training, telecommunications, air or artillery support, was devastated by fascist machine-gun fire, mortars and artillery.

Soon elected a Political Delegate of the Irish Section at Las Rozas, he remained in this position until he was wounded at Jarama on 12 February 1937. The area saw many large battles in which he shone. Will Paynter, later leader of the Welsh miners persuaded him to attend a crash course for potential officers and he was also a political commissar. 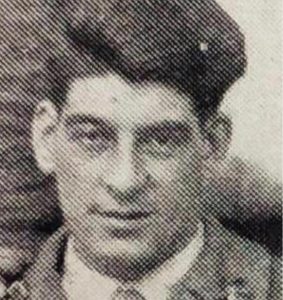 Repatriated when the war was lost, Jimmy focused on all things Irish for the next few years. On 16 June 1939, former Lieutenant Prendergast, of the Irish company in the British Battalion in Spain, wrote about the campaign to release the legendary Major Frank Ryan (1902-44) in the Daily Worker.

The leader of the Irish in Spain, March 1938, Ryan was captured by Fascists. His unusual detention, long after the release of other international prisoners, became clearer the following nyear, when German military intelligence tried using Ryan to strengthen links with the IRA. Perhaps playing a double bluff game kept him alive but Germany’s invasion of the Soviet Union changed everything, whilst his ruined health saw his heart finally give away. Now the subject of academic focus and biographies, Ryan’s life has rightly been admired in novels, songs, television documentaries and films.

In 1938, Jim Prendergast was one of those who founded the Connolly Association (initially ‘club’), a British based body of Irish migrants supporting a 32-county republic in Ireland, taking its name from James Connolly, the famous socialist republican executed by the British Army for his part in the 1916 Easter Rising. One of its first campaigns was to seek Ryan’s release.

The CA launched a newspaper, Irish Freedom, first published in January 1939, with Jim Prendergast as editor. (It was renamed the Irish Democrat in 1945.) Whilst totally committed to a United Ireland, the CA was also opposed to a sectarian military war designed to achieve that.

The IRA had now taken a turn to the right and, as war between Britain and Germany began to look increasingly likely, the movement began planning to launch a campaign of explosions directed at civilian targets in Britain.  An explosion in Coventry would lead to executions.

Police hostility to all things Irish now saw much harassment to any manifestation of Irishness. But the police badly lost a court case after charging Jim Prendergast with obstructing the highway at Marble Arch while selling Irish Freedom.  The magistrate said he “had a strong feeling that the defendant was arrested because he was selling a paper that was regarded as political” and dismissing the case, said it “should never have been brought before the court.

Under defence cross-examination a police officer  declared that “the vending of political literature was not allowed” but could not point to a specific law with regard to this.  During the three and a half hours Prendergast was detained, Special Branch officers raided his flat.

Building CA groups across Britain, Jim kicked off the expansion programme as the main speaker at a Birmingham Connolly Club meeting held at Bristol Street Schools to commemorate the 24th anniversary of the murder of James Connolly after the Easter uprising and other “Ireland’s socialist martyrs” on Whit Sunday May 1940.

During this period, he was a volunteer in a group of brave men, all former International Brigaders, under the leadership of Professor Haldane who were engaged in developing under water suits for the armed forces. Jim later served in the Royal Air Force during World War 2, as a rear gunner.

Following the war, he became active amongst the resident Irish community in London. Having commenced working on the railways, he became a guard at Marylebone, becoming a leading figure in the National Union of Railwaymen, the NUR (today the RMT) and was soon elected to be an NUR Branch Secretary and then to the Executive Committee of the NUR.

In 1966, he effectively ended the colour bar in employment at London railway stations, which had been in place for 12 years, after a member was rejected for a higher paying job.  Mr Xavier, an experienced guard, had received a letter telling him that he had been rejected for a job at Euston due to a ban on `coloured men’ being employed as guards and porters there. (At St Pancras it was just limited to guards and supervisory grades that porters could be promoted to.) Guards at Euston were getting from £10 to £15 a week more than those elsewhere. After Jimmy’s intervention, not only was Xavier offered the job, British Railways agreed that no ban would apply anymore.

Jim died 31st May,1974, following a fall down the steps outside his home in St. Johns Wood Terrace. His remains were cremated in Golders Green Crematorium, and were taken some weeks later to Mount Jerome, Dublin by his son Christopher, and placed in the same grave as his cousin, Bill Gannon, with whom he had been an early activist in the Communist Party of Ireland, having given his burial oration.

Jim’s wife, Mollie, was also politically active, and she produced a volume of political memoirs.