(25.12.20 – 25.7.02)
(left: Frank Watters pictured in the 1960s)
NOTE: THE FULL MEMOIRS OF FRANK WATTERS APPEARS ELSEWHERE ON THIS SITE –
https://grahamstevenson.me.uk/2008/11/27/the-memoirs-of-frank-watters/
A SHORT BIOGRAPHY FOLLOWS…
Frank Watters was born on Christmas Day in 1920 in the Scottish mining community of Shotts in Lanarkshire. His mother, Kate, was fond of saying that all the good people shared his birthday – Jesus Christ and Willie Gallagher, a long-standing Communist Member of Parliament. Maybe the statement summed up something about the family as a whole?
His father was a militant miner, universally known as “Paddy”. Frank’s grandparents had fled the poverty and political volatility of Ireland. Little is known of them, beyond a vague story of a threat of prosecution from a landlord in Ireland for “stealing” seaweed for food for the family. Paddy was victimised after the 1926 General Strike for the high profile he played, especially as a supporter of the Communist Party. After the strike, he was unable to find work as a result and was unemployed until 1938.
Frank’s mother, Kate, bore the main responsibility of raising four boys and three girls, of which he was the second youngest. (The first-born son, Patrick, died in infancy.) Poverty and illness were no strangers to the mining communities of the hungry thirties. The nine of them lived in a two-room cottage, with no domestic plumbing of any kind; the only lighting being paraffin lamps. The whole row shared a midden, an open sewer toilet, out back.
Such deprivation enhanced a quality of resourcefulness in Frank. He ran errands for the old ladies of the village, fetching them tots of whisky from the “snug”, in small jugs secreted under his coat, to consume by their fireplace. Walking greyhounds and performing the undignified task of a trip to the pawnbrokers for the otherwise embarrassed neighbours, all these initiatives earned him a few precious coppers, which he lodged with the local shopkeeper. He planned one year to buy wondrous gifts for the whole family and a football for himself. Normally, an apple and an orange in his mother’s stocking were his only joint birthday and Christmas present and that due to his elder brothers and sisters being able to find work. Alas, when the time came for payout, the shopkeeper told him that his mother’s grocery debts had cancelled out his own credit.
In fact, Paddy’s political and industrial activities initially prevented Frank and his brothers from getting a job in the pits after school. This background was certainly a key factor in his becoming a life-long Communist and trades unionist. All four brothers and three sisters shared similar views; indeed, one brother would become a long-standing local councillor in Shotts. “Vote Watters – Vote Communist” was the local graffiti on village walls for years afterwards! Whenever there was a `meeting of the waters’ – a reference to a fond family ballad – there would be a flowing of the whisky and detailed argument about political tactics and strategy in which all participated, younger offspring of the siblings included. Frank’s story is one of dedication to the struggles of working class people of all backgrounds. Whether you agree with Frank’s life-long passions or not, no one can surely fail to recognise the extraordinary nature of his life. 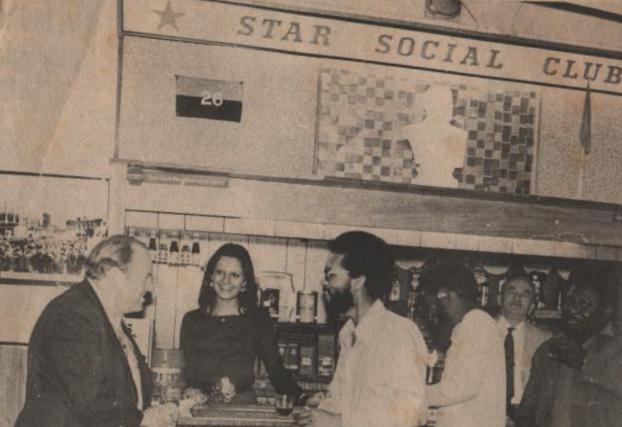 One of Frank’s outstanding initiatives was the promotion of the Communist Party’s Star Social Club, built in 1968, which sadly did not survive long after Frank’s return to Yorkshire in 1980.
Left: Frank on the far left  at the bar in the Star Club in 1974 with the organisers of the Reggae Club. Ted Day, the regular bar man and carworker can be seen behind the bar.
The club united the diverse communities of Birmingham in musical and political endeavour. A weekly folk music club saw many famous names in the Irish community perform, including the Birmingham based “Drowsy Maggie” and members of the “Dubliners”. Members of the famous Campbell family, removed from Aberdeen to Sparkhill, were close to Frank. Ian and Lorna were pretty famous names in the 60s and early 70s, but not as much as the next generation of Campbells – the band known as UB40.
Such a degree of contact, coupled with Frank’s deep association with Irish Republicanism, which went back to his own father’s involvement, saw him reach out to the city’s big Irish community. Especially in 1972, in the wake of the dreadful shooting of 15 innocent protestors for civil rights – Bloody Sunday. A massive demonstration of 5,000 was held in Birmingham and Frank was at the centre of it. Then there was also the mobilising of the shop stewards’ movement in the car factories to oppose a fascist inspired assault on the Birmingham Irish after the dreadful pub bombings. Make no mistake, Frank was always opposed to terrorism – but he fiercely supported the minority Catholic community in Northern Ireland in their search for equal rights.

Six thousand Lanark miners in eleven pits struck today against the drive of the owners for over­time. With the fear of a national stoppage before them, the own­ers are straining every nerve to pile up a huge reserve of coal. Overtime is the order of the day. Pits are being worked on Sunday. Production is being speeded up. Now the miners in the Shotts area have decided to call a halt. All eleven pits belonging to the Shotts Iron Company and the Coltness company stopped work, demanding time and a half for working over-time. This demand has been turned down by the companies.

Frank Parker   Frank was a member of the Communist Party's youth wing, the YCL, and subsequently the Party itself without break from 1937, from when he was a mere 13 years of age. He […]

Frank Thacker A long-term member of the Coventry Communist Party, Thacker was the treasurer of the Editorial Committee producing “Coventry Labour's Voice”, a journal organised jointly between the Trades Council and the Labour Party […]

Frank Foulkes   Foulkes was born in 1899 and joined the Electrical Trades Union as an apprentice. He served as shop steward, branch official, district official, area full-time official and National Organiser.   He held […]