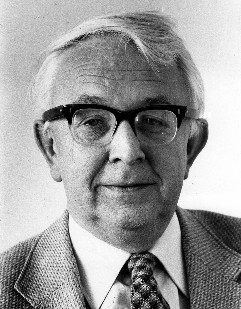 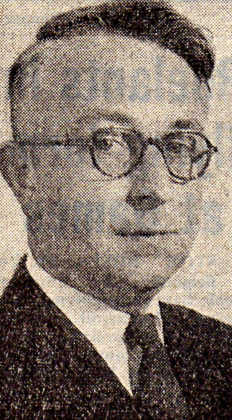 Left: in later years as Morning Star editor – Right: as a parliamentary by-election candidate in 1963

Born in Northampton on 21st December 1929, where he attended the local grammar school, Tony Chater joined the Communist Party while still in the sixth form. He then studied at Queen Mary's college, London University, where he gained a BSc in chemistry and a PhD in physical chemistry. Tony Chater seemed set on a life as a scientific researcher, after two years post-doctoral research fellowship in Canada, at the Dominion Experimental Farm studying frost resistance and a further year in Brussels studying biochemistry. Returning to Britain, he took a new direction into teaching, first mathematics and chemistry for three years, then moving to the Luton College of Technology, teaching physical chemistry.

In 1969, he took the decisive step of taking full-time Communist Party work, beginning in the Press and Publicity Department of the Party. He was then Editor of the Morning Star from 1974 – 1995, leading it during the difficult days when the then revisionist leadership of the Communist Party sought to exercise control over the co-operatively owned newspaper by replacing the editor and deputy editor.

In his long retirement, Tony Chater reportedly lately came to rue the historic 1920s split between Labour and the Communist Party.

John Haylett's obituary of Tony Chater can be viewed here:

admin Encyclopedia of Communist Biographies, A 0

Tony Atienza Full name Anthony David Atienza and born in Lambeth on 2 October 1921, he was the son of a Spanish bank clerk whose ancestors had been Spanish army officers. By 1939, the family […]

Betty and Tony Ambatielos   Tony Ambatielos in the flesh (left) and a campaign image (right) as a political prisoner drawn by Paul Hogarth    Born Elizabeth R M Bartlett in Pontypridd in O style=”float: […]

Tony Gilbert David Tony Gilbert was born in Poplar in 1914 and moved to Bethnal Green, alien territory for a Jewish family in the early thirties. He was apprenticed as a nailer in the fur […]