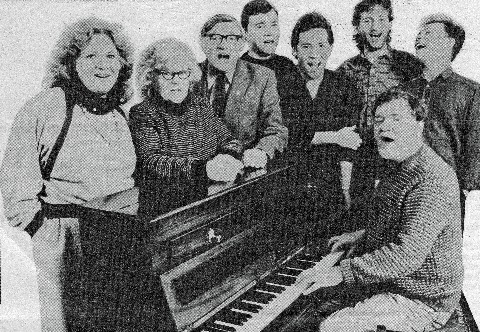 Life-long Communists, Dave Campbell (born c. 1910) and Betty Campbell (born c. 1913) are famous for having nurtured two generations of successful musicians as well as being knowledgeable and skillful singers themselves. Dave was a constructional engineering worker from Aberdeen, who became an official of the union catering for that trade in 1942, working in Tyneside, Wales and the Birmingham, where he eventually settled with his family.  Betty and Dave specialised in the songs of north-east Scotland.

Ian Campbell was born on 10th June 1933 in Aberdeen but he and his parents moved to Birmingham in 1946. When Ian left school, he became an apprentice engraver in the city's jewellery quarter.

Like his parents before him, Ian Campbell was a long-standing member of the Communist Party, starting in Birmingham’s YCL in the late 1940s.

Ian and his younger sister Lorna were also part of the Clarion Singers, founded by Dr Colin Bradsworth (see separate entry).  But they were swept up by the Skiffle craze of the early 50s to found a 12-piece band in this mode. By the late 1950s, the band re-formed as a folk group.

Ian married Pat in 1952 and they had four sons together, David, Ali, Duncan, and Robin, although they later divorced. (The sons became performers in the UB40 band and one their manager, the nam of their popular reggae style band being taken from the dole card; after rehearsing in a cellar, they went on to stardom.)

Ian was one of those who appeared in the pioneering 1950s documentaries with songs, the Radio Ballads, about the lives of working people in particular trades or communities.  His voice can be heard in `The Big Hewer’ and `Singing the Fishing’.

As a songwriter, he popularised a number of anti-war songs, including `The Old Man's Tale’.

The Ian Campbell Folk Group, which often appeared on radio and then TV. National and international tours including performances at the Royal Albert Hall in London and the Newport folk festival.  The Ian Campbell folk group's recording of Bob Dylan’s `The Times They Are a-Changin' ‘ reached no 42 in 1965. The Campbell family also ran one of the country's most successful folk clubs, the Jug o' Punch, usually held in the large rear room of Digbeth's civic hall in Birmingham.

Ian Campbell himself was recognised by BBC Radio 2 Folk awards for his outstanding contribution to traditional music.

After the Ian Campbell Folk Group split in 1978, Campbell did a degree in theatre studies at Warwick University.

In working as a television producer and presenter, he was part of TV-am, presenting a food programme focusing on recipes.

The Wynne family  The parents of the family, Annie Elsie Gorrie and Charles Henry Wynne (b1868), were Quakers. Their children – Charles, John, Arnold, and Margaret Wynne – were all active in the Leicester Communist […]

Bill Campbell Bill Campbell was the son of J R Campbell, an iconic figure in the British Communist Party. As a teenager at the height of the depression, Bill Campbell left Britain and took a […]

Kenneth John Campbell was born in Crofton Park, south London, on September 26th 1909. The son of a Lloyd’s insurance man, he was educated at St Dunstan’s school, Lewisham. He was then articled to his […]