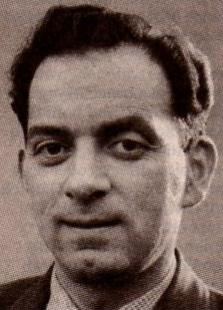 Kaye was born October 8th 1913, the son of Lithuanian Jewish immigrants. His father died when he was five years old, leaving his mother to cope with poverty through charity.

At 14, he began work as a woodcarver in a small furniture shop making cabinets, moving to the fur trade later. Despite limited formal education, he was a capable painter and water colourist throughout his life, also producing poetry and cartoons. These talents had been revealed when he began attending art classes at the Bethnal Green Men's Institute in his youth.

Joining the Communist Party in 1934, he was a veteran of the 1936 battle of Cable Street. Kaye was a powerful and charismatic public orator, beginning with involvement in the unemployed workers' movement and then activity against Mosley's Blackshirts on street corners in the 1930's East End of London. After the war, he was active in squatters and tenants' campaigning work, especially against slum landlords. Kay married Margaret Johnson in 1946 and they had three children.

He was elected as one of three Communist councillors to Stepney council in 1960 as a result of this and remained on the Tower Hamlets council for 15 years. In common with other Communist councillors, it was said that his success in re-housing constituents undermined his power base! Although, more fundamentally, local government reorganisation also removed much of the geographical and community focus that had enabled a break through that lay at the heart of the East End, as well as other, highly localised strongholds.

Kaye was a regular speaker at open air meetings in Finsbury Square, where he addressed city office workers during their lunch breaks. He was an effective fund-raiser for the Daily Worker/Morning Star at rallies, utilising his undoubted personal passion, humour and humanity to extract large sums from audiences. He worked closely with Ken Sprague in the `Mountain and Molehill' graphics enterprise, where he displayed talent as a copy-writer.

Late in life, he became a woodcarving teacher in a north London school. Whilst backing the CPGB EC in its war against the Morning Star, largely as a loyal democratic centralist, he was against the dissolution of the CPGB. In all his time in the Party, he had been an uncritical and firm – at times downright unpleasant – denouncer of dissidence. Paradoxically however, he had come to oppose the continuation of a Leninist structure and was in the end much embittered by the entire experience, in retrospect personally negatively viewing his life in the Party. Given the extent of his contribution and success over forty odd years up to the mid-1970s, this was clearly a very sad outcome to a long life of commitment.

Kaye M Brutton was a Communist councillor in Wolverhampton, elected in particular circumstances. He had been a popular and elected Labour councillor, who had been a Daily Worker supporter at least since 1940. Having finally […]