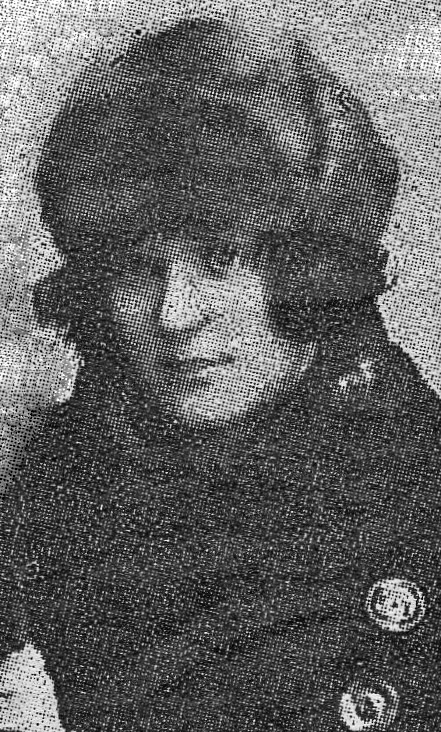 Rose Cohen was born in 1894 in London, where her father Morris (born in Poland in 1855) a “Ladies’ Costumier” had fled from Lodz with his family to escape persecution.  The 1911 Census showed the family to be living at 74 Globe Road East, Mile End Old Town, London. As well as Morris, then aged 56, there was Ada, aged 54 and also Polish, his wife and the mother of Rose and her siblings. The oldest child was Louis, a machinist, born in Spitalfields in 1890.  Nellie, born 26 January 1892, and a clerk, came next.

Rose  Cohen was then only 17 years and still described as a student.

Nellie was always known for her administrative skills and, with May O’Callaghan (1881-1973, later of Belsize Park Gardens, Hampstead; known to many as O’C), would later manage the offices of Sylvia Pankhurst’s Women’s (later Workers’) Dreadnought. It has been alleged Nellie and May were lovers, whether this was so or not they certainly shared a flat with fellow Communist, Daisy Lansbury (see separate entry) and were life-long friends.

In 1936, Nellie would marry Hugo Ponsonby A Rathbone (b. 22 January 1895 – d. 9 October 1969), and, now known as Nellie Rathbone, with him adopted Joyce, (b. 9 Feb 1929), the natural daughter of Irish Communist writer, Liam O’Flaherty, and later a celebrated harpsichordist and musician.  By 1939, at least, the Rathbones lived at 28 Parliament Hill and then later on Langbourne Avenue in Highgate.

Associated with the production of Labour Monthly, in the Communist Party, Rathbone was responsible for the Colonial Committee and liaison with the League Against Imperialism. He came from the well-known Rathbone family of Liverpool, non-conformist merchants and ship-owners engaged in philanthropy and public service.  Having attended Oxford and joining the Students’ Socialist Party, with Dutt, Rathbone was a founding member of the British Communist Party.

A prolific writer, he was a confidante of Raji Palme Dutt (see separate entry). One book Rathbone wrote on India was deemed sufficiently to the point as to be published in Russian. A measure of his politics is that, his interests having drifted, he had slipped out of Party membership but re-joined it in the pointedly relevant year of 1956.

Drawn into this milieu by her older sister, Nellie, in those days of limited educational opportunity for working-class children in the East End, Rose was lucky to find opportunities though the Workers’ Educational Association. This gave her an extensive education in politics and economics as well as fluency in three languages. For a woman, the daughter of poor immigrants, this was itself a remarkable achievement.

It made her a welcome recruit, first on the staff of the London County Council, and then at the Labour Research Department, which had become a centre for young leftwing intellectuals by the end of the First World War. Rose, her friend and admirer Maurice Reckitt recalled, had great vivacity and charm. She was a bright and lively woman, of considerable intelligence and with a wide knowledge of literature. Hauntingly beautiful, with brown eyes and long dark hair, all the men who knew her talked of the magical quality of her smile, something she claimed to be herself unaware of. But she undoubtedly had a huge circle of male admirers throughout the British left in the 1920s.

An important and founding member of the Communist Party, she was from the start very close to the key persons in the Party’s leadership. Indeed, Harry Pollitt proposed marriage to her many, many times. He wrote on the back of a picture of her: “Rose Cohen, who I am in love with, and who has rejected me 14 times.” But, instead, she married Max Petrovsky, the representative to Britain and Ireland of the Executive Committee of the Comintern from 1924-27 and head of the Anglo-American Secretariat. Born around 1883, Petrovsky’s real name was David Lipetz, though in his life as an underground revolutionary he used many other names, such as Goldfarb, Lipec, Breguer and Humboldt. In Britain, he was known as Bennett, or Bennet.

In 1927, Rose and Max moved for good to Moscow and their son, Alyosha, was born in December 1929. In 1932, Rose became foreign editor of the new English-language paper, the Moscow Daily News. As the world began to gear itself for war in the late 1930s, suspicion fell on the clandestine past of Petrovsky (who along with all too many other Comintern functionaries had operated in the half-light of legality and illegality in western countries) and he was arrested on 11th March 1937.

Perhaps sure that Petrovsky’s arrest was some extraordinary bad mistake – as indeed it was – Rose appears to have been oblivious to the extreme danger her own innocent actions now put her in as far as the paranoia that passed for military `intelligence’ at the time in Moscow was concerned.  As soon as he was aware of Petrovky’s arrest, Harry Pollitt wrote to the general secretary of the Comintern, Georgi Dimitrov, of his “very warm personal friendship” with Petrovsky and his confidence in his unwavering loyalty to the international communist movement. The news of the arrest, he wrote, came as “one of the greatest shocks of my life”.  In July Pollitt went to Moscow to find out more and hopefully save her but, inevitably, the accusations against Petrovsky of spying for the British security forces resulted in Rose herself being arrested also on August 13th 1937 and then sentenced to ten years in a labour camp. Only a short while later, Petrovsky was shot.

But the actual effect of intense British Communist representations on the case of the Petrovskys was to increase Moscow’s doubts regarding Pollitt’s own reliability. What Pollitt did not know was that the former Hungarian Communist leader, Bela Kun, who had also had spent almost two decades in undercover work for the Comintern, had been arrested as a suspected agent for the imperialist powers and actually named Pollitt as a British agent. Serious consideration was even given in Moscow to pursuing action against Pollitt.

When Rose’s arrest became known in Britain, demands that the British government intervene were seen by the Daily Worker snarled as anti-communist interference. Although many commentators today have retrospectively sought to damn British Communist leaders from seven decades ago for a morally suspect attitude, attempts to save her clearly were made behind the scenes and not only by Pollitt. William Gallacher MP also went to see Dimitrov and asked about Rose, Dimitrov looked at him gravely for a few moments, and said: “Comrade Gallacher, it is best that you do not pursue these matters.” Pollitt was distraught and also had a long interview with Dimitrov, and possibly even Stalin, in an attempt to get Rose out of the Soviet Union.

What then exactly happened is unclear but it is certain that Rose was shot on November 28th 1938. perversely, it maybe that the fuss being made by Pollitt sealed her fate. Recent research has created a clear picture that all too many Soviet Communists found themselves denounced by others for crimes that had not a shred of truth in them, with the motivation being located only petty jealousies and rivalries. It is likely that her death removed her as a potential witness to just such a conspiracy. The sheer fact that her friends were pestering people such as Dimitrov may have doomed rather than saved her and his warning against asking too many probing questions may have been to protect his British comrades from further suspicion.

In the end, Rose’s nationality was a liability rather than the boon that it should have been. Contrary to comment from those motivated to slur British Communism, by long precedent in Russian (and now Soviet) law Rose was not required to formally renounce her British citizenship; the mere act of marriage took it from her.  Whatever the case with varying arguments about Rose Cohen, the truth is that, sadly, retrospective rehabilitation has long ago made it quite clear that she was at all times completely innocent of all the charges against her.