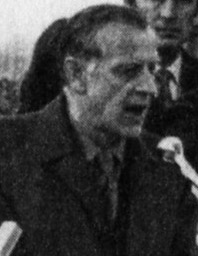 Born 7th June 1914 and grew up in Kilburn, north west London. His father was a small jobbing builder, who died in 1929. Reg left school to become an apprentice toolmaker and immediately joined the AEU. He became increasingly active and then prominent in the London North District of the union during the 1930s, leading to his joining the Communist Party in 1939.
Left: Reg Birch in 1973
In 1941, he was already an Acting Steward in Swift’s scale-making factory in the Park Royal area (the heart of the engineering world of west London, which Birch became particularly associated with), when a dispute broke out for the reinstatement of a sacked convenor. Despite the wartime restrictions of Order No. 1305, preventing industrial disputes, the Works Committee at Swift’s called for a “complete holiday” for all unless reinstatement occurred. In the subsequent legal case, Birch defended himself, but leniency was in any case applied all round, for reasons of politics.
That year, he was elected President of the North London AEU, a position he retained until be became a full-timer for the union. In 1942, he began working at Landis & Gyr, also in the Park Royal area. Within two years he was sacked and then reinstated as solidarity action was undertaken. He became a member of the prestigious National Committee of the AEU in 1943 and was repeatedly re-elected up until 1960, when he became a fulltime official. Immediately the war was over, he secured employment at Havilland Engines and was there without a break to 1960, he was also convenor of shop stewards for all that time from 1946.
He visited the USSR on an AEU delegation in 1946 and Hungary the same year. Whilst he subsequently claimed to have been an opponent of the British Road to Socialism from 1950, he served on the Communist Party Executive Committee from 1957 and was especially supportive of the line that backed Soviet intervention against a counter-revolution.

Birch first contested the Presidency of the AEU against Bill Carron in 1956 but lost decisively. In 1960, he was elected Divisional Organiser of London North. He again ran for the Presidency, unsuccessfully, in 1964 but this time the result was much narrower. Birch was elected in membership ballots an AUEW (the new name of the union) delegate to the TUC in 1966,1967 and 1968. Below: The Communist dominated AEU N London DC in 1948 – Birch is in the back row, second left; and detailed again – right.

A secure base for his leadership ambitions was won when he was elected to the AEU Executive Committee, a fulltime post, for the London and South East seat in 1966, a seat he retained until his retirement in 1979.
In 1967, the Communist Party’s Engineering Advisory split 24 votes to 16 on the question of who to support for the Presidency. The majority favoured backed former Party member, Hugh Scanlon, as a contribution to building a broad left alliance and as a more likely winner. Events proved the majority absolutely right, but not before Birch had stood as a candidate against Party policy, although his vote trailed very badly indeed.
Expulsion from the Communist Party was inevitable and now Birch’s unexpurgated sectarianism came out for all to see. He was agitating for the foundation of the Communist Party of Britain (Marxist-Leninist) in September 1967. In the following year, he and others had formed this party and Birch was CPB M-L Chair from 1968 to 1985.
Notwithstanding this shift in direction, Birch’s west London base and EC seat gave him a big enough role in the 1970s. During this period, he was Secretary of the trend-setting trade union side of the Ford NNC, forging a reputation for crafty yet witty negotiating techniques and was a member of the TUC General Council from 1975 to 1979. In retirement, he was solely concerned with the activities of his party, which never numbered more than a couple of hundred at the very most and was much reduced following his retirement from the front rank. Birch died on 1st June 1994.
Main Source: “Reg Birch: Engineer, Trade Unionist and Communist” Will Podmore, Bellman Books (2004)

Reg Neal A prominent member of the Hayes, West Middlesex Communist Party, R.P. (Reg) Neal was a popular local teacher at Yeading and secretary of the Hayes Left Book Club, which he established in October […]

Betty Birch Betty Birch was born on 2nd March 1930 in Rothwell, Northamptonshire, the second child of Walter Andrew, a boot and shoe worker, and his wife Ruth, who came from the Forest of Dean, […]

Christopher Berkeley Peyton Birch was born in 1928 in St Kitts, which was then the British West Indies, the son of Norman Peyton Birch and Iris Berkeley King.  St Kitts was the same small island where […]