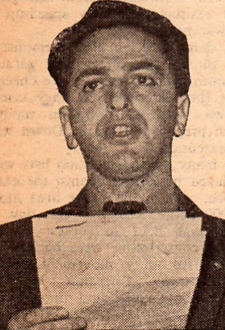 Monty Cohen joined the Communist Party after a United Front meeting at the greyhound stadium in Tredegar, at which Ernie Benson and W H Mainwaring, MP, spoke. Cohen was a prize winning student at Glamorgan County Grammar School. It was Ernie Benson who recruited him at a Daily Worker event for the United Front initiative in Tredegar. This meeting helped establish a local Tredegar branch of the Communist Party based around Dai Maggs. Cohen was later editor of the Young Communist League publication `Challenge’ and, later still, the Southampton-based Amalgamated Engineering Union (AEU) Hampshire District Secretary.

Nat Cohen Born in the east end of London as Nathan Cohen, he was always known as Nat. (Pic: Nat and his wife Ramona)    In the early 1930s, Nat was in Argentina for a time […]