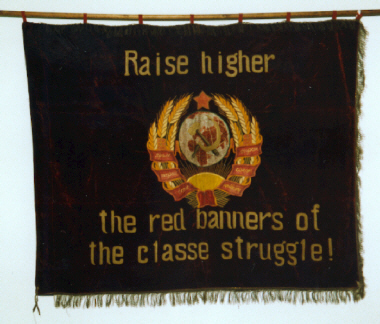 The banner is one given by her to bring back to her locality as a memento of solidarity.

She was a young and highly competent mill-worker from Shipley and member of the Young Communist League, as was her husband.

Seemingly, however, Maggie also had a long relationship with Allan Massie, a YCLer from Aberdeen, although what came of this is thus far unknown.

Having attended the International Lenin School from 1927 to 1930, she was a “senior correspondent” at the international broadcasting service (Inoradio) of Radio Moscow between 1933 and 1939. An Mi5 intercept in 1936 suggests she was acting as a Comintern messenger. Though it only refers to her taking tickets to Paris, many British women Communists were used for the ease which their country’s passports allowed them to enter fascist countries with funds and messages.

She was the mother of a child born in 1938 and was living in Haringey at least until the end of the 1940s.

A highly admired tutor of Marxism for the Communist Party in the West Yorkshire area, she would go on to speak widely at meetings across the country, particularly about the Soviet Union.

At the height of the war-time alliance with the USSR, the Russia Today Society hired the Regal Cinema in Glasgow, which held over 3,000 people for an event celebrating the October Revolution on November 8 1942.  The hall was full to capacity to hear Maggie and fellow speakers, Percy Barstow, Labour MP.

Maggie was also the author of a Russia Today pamphlet, Women in Soviet Society published in 1944.

She was still active in the 1970s in speaking at meetings, including relaying her experiences in the 1920s to a younger generation.

Arthur Jordan   Arthur Jordan was born 24th January 1918 in Stratford upon Avon, his father was a postman and his mother ran the refreshment room at Stratford station. Both made sacrifices in order that […]