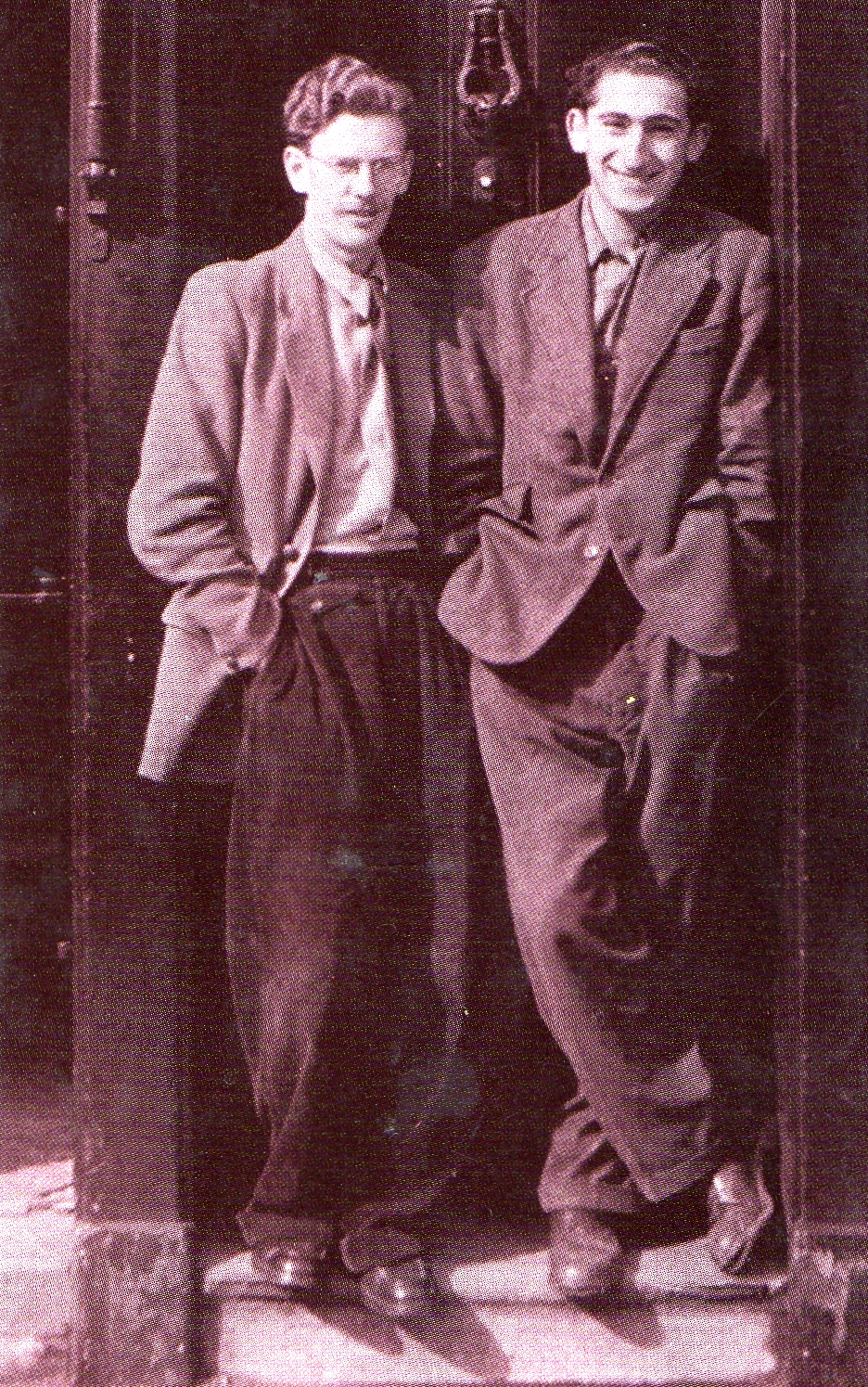 Born on 1st. August 1930, this surname of this famous British composer, playwright, and lyricist was originally Begleiter. He was the youngest of seven surviving children of a Jewish family in the East End of London, refugees from Galicia, which had been part of the Austro-Hungarian Empire.
So poor were they that his father worked as a tailor in a garden shed London. When Lionel was six years old, a teacher told his parents that he was a musical genius. Although he had an old violin, he did not practice and his lessons were stopped. He never learned to read or write musical notation; this did not stop him from becoming a central figure in in the development of modern British popular music. A talented artist, when he was 16 he won a scholarship with St Martin’s School of Art but he was expelled for "mischievousness". Having given up his ambition to be a painter, he took jobs in silk-screen printing works and commercial art studios.

Pic: Lionel Bart (right) with John Gorman in the early 1950s, when they were both still Communist Party members:

Lionel did his National Service in the Royal Air Force, where he met John Gorman (see separate entry), who was also interested in using his artistic talent but who had already received training in the silk-screen printing side of the print business. After leaving the RAF, Lionel borrowed £50 and set up a printing business with Gorman in Hackney. Like Gorman, Lionel joined the Communist Party around this time, probably along with Gorman in 1949 whilst they were both still in the forces.

The delightful black and white photographs of them, taken in 1950 outside their workshop at 53 Elderfield Road, Hackney are reproduced in John Gorman’s autobiography. A careful scrutiny will show the poorly-heeled poverty of their artisan-like condition. Lionel’s infamous songwriting career actually began in amateur theatre. In 1952, he arranged the annual show, a cabaret called IYC Revue 52 for the left-leaning International Youth Centre. He and his co-writer, John Gold, created a story about Robin Hood. The following year the pair auditioned for a Unity production of the Leonard Irwin play, `The Wages Of Eve’. Then Lionel began composing songs for Unity Theatre, contributing material (including the title song) to their 1953 revue `Turn It Up’, and songs for their 1953 pantomime, an agit-prop version of Cinderella. While at Unity he was talent spotted by Joan Littlewood and joined Theatre Workshop.

Lionel was at the World Youth Festivals in Bucharest in 1953 and Poland in 1955, primarily arising from his involvement in Unity Theatre and it was his association with Unity that drew him into the Communist Party. His and John Gorman�s printing firm began to be a success but Lionel’s mind was elsewhere. He began to plan to enter showbiz. After noticing St Bartholomews hospital ("Barts") when passing by on a bus, he changed his name to Bart. This led to a serious surge in professional entertainment work that for a time sat uneasily with his role as proprietor of an art printing firm, especially one that sometime did work for the progressive movement.

His work included writing comedy songs for the radio programme, the Billy Cotton Band Show. In September 1956 he saw Tommy Hicks performing guitar in a Soho coffee bar. He signed him up to perform in a group called the Cavemen. Lionel Bart persuaded agents to see Hicks perform; being suitably impressed they signed him up and he adopted the stage name Tommy Steele. Lionel’s songwriting (sometimes in collaboration, as with Tommy Steele) brought him widespread recognition; he wrote Livin’ Doll for Cliff Richard and Little White Bull for Tommy Steele, along with Rock with the Cavemen, Handful of Songs and Butterfingers. This musical work led to his being awarded three Ivor Novello Awards in 1957, four in 1958-9, and two in 1960. His first professional musical was the 1959 Lock Up Your Daughters, based on an 18th century play by Henry Fielding. Following that, Fings Ain’t Wot They Used T’Be was produced by Joan Littlewood’s Theatre Workshop. This was particularly notable for its use of Cockney accents, which slightly presaged his later and infamous Oliver!

In 1960, Lionel was given the Variety Club Silver Heart for Show Business Personality of the Year, even so, he was still fond of flaunting his Communism in his early days of success before he was swept away by a life-style of unreality. He recorded a nine- track set in 1960 that contained the somewhat unlikely story-song of "Newmarket Nightmare" about the day "they entered a philly from the USSR" at Ascot with the daring name "For a Lasting Peace and a People’s Democracy." She beats the favourite, "Challenge Royal," causing an uproar!

But his great success with Oliver! swept him into the limelight in a dazzling way. The musical opened on 30th June 1960 and received 23 curtain calls. It ran for 2,618 performances in its London run. The 1968 film version, directed by Carol Reed, won several Oscars, including Best Picture. The whole project was a huge hit from the very beginning and, unlike much else that Lionel was associated with, it did not lost its shine. The musical saw single hits such as As Long As He Needs Me (Shirley Bassey) and Consider Yourself. It is estimated that Oliver! brought Lionel around £16 a minute, when the average wage was nearer half that for a week. Such success saw ironies; it was Lionel who wrote the theme song for the 1963 James Bond movie From Russia With Love. His other hits include: Do You Mind? (Anthony Newley and Andy Williams), Easy Going Me (Adam Faith) and Always You And Me (with Russ Conway).

After Oliver, Bart’s next two musicals, Blitz! (1962) (which included Far Away – another hit for Shirley Bassey) and Maggie May (1964), had respectable West End runs but Twang! (1965) was a notorious flop and La Strada (1969), opened and closed on Broadway after only one performance. Bart used his now considerable personal finances to try to rescue them, selling his past and future rights to others of his works, including Oliver!, in order to generate capital. But he could not recapture the moment and, by 1972, Bart was bankrupt, with debts of �73, 000. He turned to drink, and a twenty-year period of depression ensued, from which he ultimately recovered, after attending Alcoholics Anonymous.

His old friend and comrade John Gorman reappeared to help Lionel sort out his life and he gained attention again in the 1980s with a new version of Livin’ Doll with satirical words. In 1986 he received a special Ivor Novello Award for his life’s achievement. His "Happy Endings," a 1989 advertising jingle for Abbey National, was a great success. Cameron Mackintosh, who owned half the rights to Oliver!, revived the musical at the London Paladium in 1994 in a version rewritten by Lionel Bart. Mackintosh gave Lionel Bart a share of the production royalties.

Although Lionel Bart was always known to be gay by those in the theatre world he was often publicly romantically linked with Judy Garland or Alma Cogan in the early days and did not come out publicly until the 1990s and he died of cancer, aged 68 on Lionel Bart died on 3rd April 1999.

Lionel Munby Born in Oxford, Lionel Munby developed an interest in social history and politics in the 1930s. After school in Oxford and Clifton college, Bristol, he entered Hertford College, Oxford, where in 1939 he […]