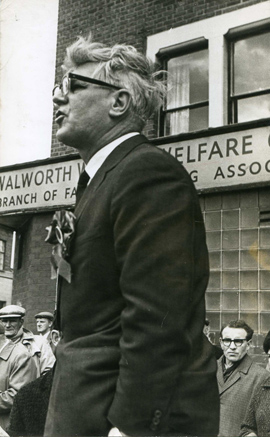 Born Spencer John Bent, after his father (the name Joe being more of a nickname), he was a towering figure in Southwark community politics for a couple of decades in the 1950s and 1960s. Joe Bent had a regular pitch on Sundays at the East St market in Walworth, where he is pictured when standing as the Communist Party candidate for Southwark around 1966. Joe stood in many elections, notably against the notorious Ray Gunter, a vicious Labour right winger and Minister of Labour in the Wilson governments, who thus became the object of particular opposition by Communists.

Joe was a superb orator and never needed a microphone or loud hailer. During the GLC elections, when he stood for the whole of Southwark, Joe narrowly missed by less than a thousand votes from winning a seat, his exact vote is uncertain but I believe it was well over 15,000. Joe’s effective campaigning was backed up by scores of local supporters including the late Nell Vyse, a veteran campaigner for Southwark tenants. The other photo was taken in the 1960s; it is of a meeting held by the Ex-Service Movement for Peace in East St market, Walworth. The ESMP was party dominated and lasted until around 1968, when it was subsumed by Ex-Service CND.

Joe regularly stood in general elections for his constituency; over a period of 16 years he built up a significant vote, more than doubling the numbers and almost reaching 5% of the total votes cast:

In 1970, Joe handed over the role of candidate but a modestly successful Communist vote in the area was bequeathed to his successor. Joe’s last contest was in the 1966 General Election:

Joe Bent’s father, John Spencer Bent, was awarded the Victoria Cross during WW1. [see http://www.stowmarket-history.co.uk/bent.htm] Whilst Joe himself was also a non-commissioned officer in the Second World War, rising to the rank of Captain, and serving in the desert war. Joe would never talk about the war, or his past, being very much a private man. Joe was also a close friend of Jean Ross (see separate entry), who inspired the character of Sally Bowles, played by Liza Minnelli in the film “Cabaret”. 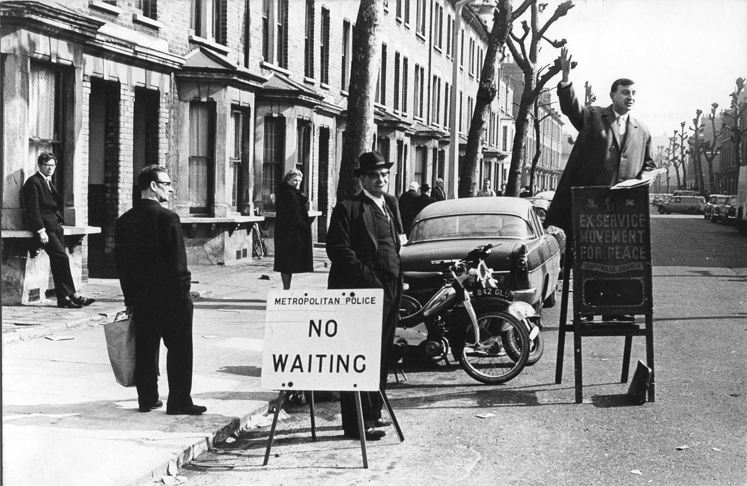 He was always at his best at public meetings where he could really raise a crowd. He took up teaching eventually. Along with Nell Vyse, a veteran Communist tenants’ organiser, he did much for the people of Southwark.

Pics: Ex-Service Movement for Peace in the 1960s in East Street Market, Walworth; on the stump for votes… 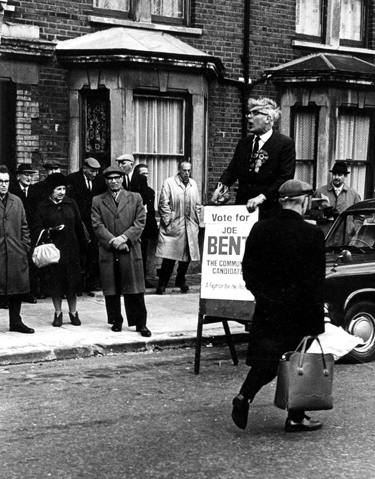 Joe Deakin Joseph Thomas Deakin was born on August 11th, 1858 in Wednesbury, Staffordshire, the son of Charles, a blacksmith, and Marie, nee Middleton. He left school at the age of 12 to work for […]

Joe Oliver Joe Oliver was President of Southall District of the Amalgamated Engineering Union (AEU) from 1940.   A Communist, he was described as "an eloquent, inspiring speaker, factory management have learned to respect his skill […]

Joe Kahn Joe Kahn was born on the 24th February 1916 in London to Russian-Jewish immigrants. He left school at 15 and worked in a number of jobs before becoming a warehouseman. He joined the […]