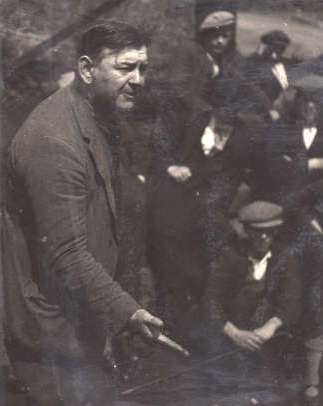 Jim Ancrum was born in Felling-on-Tyne, in County Durham, England, in 1898. Becoming a noted orator and soapbox performer, he would end up as as a legendary figure in the north-east region.

A miner, he joined the Communist Party in 1926, and was one of thousands arrested during the course of the General Strike and the miners’ lockout that followed.

During the Dawdon Colliery dispute in County Durham in 1929, Ancrum organised the collection of food and money around the county through ‘Workers International Relief’, a humanitarian aid division of the Comintern. The strikers and their families were enabled by this aid to survive the fifteen weeks of the dispute. After writing about this for `Labour Monthly’, Jimmy Ancrum was involved in similar work with Workers International Relief during strikes of textiles workers in 1930.

Jimmy Ancrum was elected to the Communist Party’s Central Committee at the end of 1929 and attended the International Lenin School in Moscow in 1931-2.

Ancrum led the Felling branch of the National Unemployed Workers Movement (NUWM) and, in the late 1930s, was NUWM national organiser. He was the Tyneside organiser of the national Hunger Marches of 1930, 1932, 1934 and 1936, and actually marched himself in 1934.

He was elected a Communist councillor to Felling Urban District Council (a local authority now subsumed into Gateshead) in a 1935 by-election. In the normal elections of 1937, he was re-elected and even doubled his vote. As a councillor, he battled for measures to assist the unemployed. During the Second World War, he carried out the role of local ARP Warden, in addition to his elected responsibilities.

Jim Ancrum died suddenly in 1946 but, in the election to fill his seat, it reverted to Labour.