James Arthur Cousins was born on 2nd July 1894 in Bracknell, Berkshire and, as a child, lived on the north Ascot downs. His parents were relatively independent, financially, in that they owned two semi-detached houses, one they lived in and the other they rented out. Jimmy’s father was a skilled stone mason, his mother had a sweet shop in the grounds of their house and both managed their own fruit and vegetable business, complete with horse and cart. 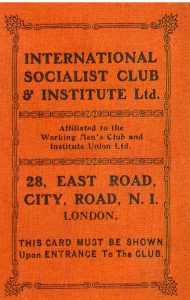 There had been a Communist Club, primarily for German emigres, which under a variety of names operated out of various central London premises during the mid to late nineteenth and early twentieth centuries. Most Left personages of the era had some association with the Club, but the most important was Karl Marx.

The Club formed an important institutional link between earlier manifestations of socialism in Britain and European socialist movements, though in its final phase the Communist Club was less of a political body and more of a social club, though one that could be hired for conferences.

Something of a revival occurred after the SDF connected again with the Communist Club in 1900. Two years later, it moved to 107 Charlotte Street, which was visited by Lenin.  The following year’s SDF Annual Conference was held at the club, whilst the newly formed Socialist Labour Party held its first meeting in London there.

The Club was supposedly closed down after police raids in 1918 but the Socialist Party of Great Britain was still certainly  holding meetings there in late 1919. It seems the International Socialist Club was founded at premises at 28 East Road, off City Road, in early 1920 as a sort of replacement. It certainly saw itself as the successor to the Communist Club and was the venue of a number of important meetings connected with the formation of the Communist Party of Great Britain, including the second day of the Unity (Foundation) Congress, which Jimmy Cousins was at.

He met and later married Alice Lucas in the ILP before they both joined the Communist Party, in 1926 or 1927. (See separate entry for Alice) 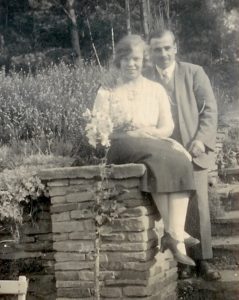 Jimmy and Alice Cousins on their wedding day (c1926)

During the depression, like so many, Cousins not only lost many jobs because of his political activities but he also took work where he could find it. Whilst labouring on building sites and in road works, he had the special experience of chairing a union meeting at which Tom Mann not only spoke but also gave him a gavel as a personal memento. So treasured was this that it found its way to the EEPTU’s Esher College for safekeeping.

The Cousins family moved to Dagenham in 1930, being allocated a house on the new London County Council housing estate. During the early 1930s, he played a prominent role in support organisation for Hunger Marches coming through Essex, ensuring the provision of food kitchens in Broad Street, Dagenham for the marchers. He was a participant in the `Battle of Cable Street’ in 1936.

As with many Communists in the 1930s, the Cousins household kept the Daily Worker going during the years that it was boycotted by the distribution system, keeping the paper in the public eye by a judicious use of the pushchair now kept busy with little Elsie (later Oliver) sat in it.

James and Alice were both active in the co-operative movement; during the second world war, James was directed to work in the warehouse of the local co-op. He promptly joined USDAW and became the elected national chair of the Men’s Guild and a member of the management committee of the Gray’s Co-operative Society. James Cousins stood for election in the Essex County Council elections in 1945, only missing election by a narrow margin of less than about ten votes. 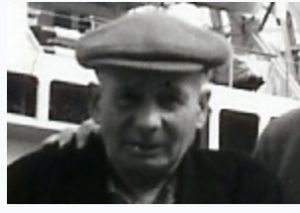 As the leading light in Dagenham Communist Party during the war years, when the Party grew phenomenally, with his two decades as a Party activist to lean upon, James was mentor to the many new young entrants into the Party, a factor that would have significance for the post-war period of the Party’s prominence in the main centre of employment at the Ford plant. James Cousins played a big part in the post-war peace movement. He was very long-lived, only dying on 30th March 1990, aged 95 years.