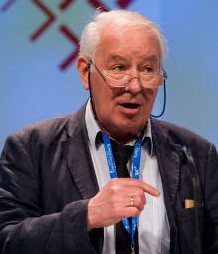 Jack Amos led a life that confounded media images of Communist trade unionists as dour, single-minded party automatons. His quietly spoken, self-effacing demeanour masked a wickedly dry sense of humour and his post-meeting contributions in the pub could elicit both laughter and wry smiles.

He was a part-time voluntary assistant at London Zoo, giving guided tours of its architecturally significant features, and his other passion was the National Trust property at 2 Willow Road in Hampstead. Amos spent five years guiding visitors round this modernist house designed by Hungarian communist architect Erno Goldfinger, in which he enjoyed great times when Goldfinger and his wife Ursulla lived there.

But it was as a film archivist and trade unionist, at all levels from the grass roots to national executive of Bectu and all its predecessor bodies, that he made his mark.

Daily Mirror former industrial editor Geoffrey Goodman, who worked with Amos and his Red Flag Productions partner Rob Wright to produce a film documenting the history of the Transport & General Workers Union prior to its merger into Unite, remembers him as a “superb film technician.”

Starting out as a film projectionist in the 1960s, Amos worked widely in film and television production and developed a reputation as a film researcher and an expert on not only the labour movement but also, bizarrely, the British royal family. “When he finally became a documentary film producer in the ’90s, the name Jack Amos was an established label of excellence, dedicated professionalism and true quality,” says Goodman.

Aside from a brief period as a union official he was happier on the tools, working as a lay activist and representing his union on a number of committees, at regular Southern & Eastern Regional TUC meetings and as a delegate to the TUC.

Amos, who was just 63 when he died of only recently diagnosed cancer, became politicised at an early age. He was brought up in Bermuda in the 1950s, where he saw at first hand the racial segregation, an experience that left him with a determination to overcome injustice. Among the first political rallies that he attended was the 1961 Trafalgar Square protest over the murder of Congo prime minister Patrice Lumumba at the hands of coup leaders doing the bidding of US imperialism. He was at the Grosvenor Square anti-Vietnam war demonstration, Grunwick and Wapping and was also involved in the Occupation of De Lane Lea Studios to stop them being closed in the 1970s.

Just as he had been a strong supporter of the Soviet Union, he was a similar champion of solidarity with Cuba and other Latin American states asserting their independence from Washington.

During his decades in the Communist Party, he never sought leading positions, preferring to work in his local West Hampstead branch, engaging not only in day-to-day activity but in discussions of political theory.

Slightly edited version of an obituary in the Morning Star, Thursday 18th February 2010 by John Haylett, plus additional miscellaneous sources..