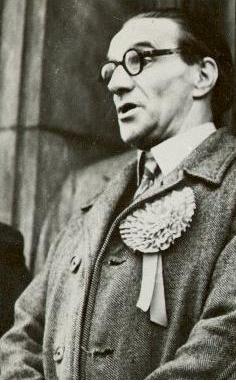 (left to right – Workers Weekly poster, Campbell in the 1950s, as a candidate in 1945 and – featured image – as a young man when he was the centre of controversy)

John Ross Campbell was nearly always `J R’ in his published work. But `Johnnie’ to his close comrades, was primarily a Communist journalist and political writer, with a bent to the Party’s trade union work, who was always at the centre of events.

Born in Paisley in 1894, after elementary school, Campbell became an apprentice grocer in the Paisley Provident Co-operative Society. He came to socialist politics very early, joining the BSP in 1912 and represented the BSP on Glasgow Trades Council 1913-1914.

During the First World War, although he shared the BSP’s anti-war views, he was a already a member of the Royal Naval Volunteer Reserve and, being called up, allowed himself to experience the way war affected the ordinary working class youth. He served in a naval division in France and in Gallipoli, and was wounded in action in both fields, permanently so in France, being awarded the Military Medal.

He resumed activity with the BSP in August 1918 on being repatriated and was election agent for Fred Shaw, the BSP candidate for Greenock in 1918. he was Chair of the Paisley branch of the Scottish Federation of Discharged  Soldiers and Sailors in 1919, and vice-Chair in his union branch, the Amalgamated Union of Co-operative Employees in the same year.

As organiser for the Scottish Workers Committee from 1920-21, along with Willie Gallagher, he was Chair of the National Workers Committee in 1921-1922, a syndicalist inspired workers organisation with close ties with the former Clyde Workers’ Committee. He was also a foundation member of the Party. Campbell was the Secretary of the Glasgow region of the Red International of Labour Unions from 1922-1923 and from there became the editor of the “Worker”, the journal of the Minority Movement from 1923-1924. A formally independent body and a sort of nascent `broad left’, the MM loosely coordinated the work of Party members and allies within the trade union movement.

Campbell also became was a member of the Party’s executive in 1923 and his RILU role and EC membership comfortably eased him into being appointed acting editor of the Party’s own organ, “Workers Weekly”, in which role he served in the decisive period before the 1926 General Strike, from 1924-1925.

In this role, he became notorious, following his arrest in 1924 for sedition, after he had made an appeal in the columns of Workers Weekly to British troops. He was charged with inciting mutiny for his “Open letter to the fighting forces” – in which he called on soldiers and sailors to “turn your weapons on your oppressors”. The labour movement responded strongly to this attack on free speech, which merely sought the `neutrality’ in class struggle that the British state always claimed for itself.

The minority Labour Government, the first, then failed to proceed with the prosecution. To the fury of the press, the Labour attorney general had decided to prosecute the charge of sedition since there was a dearth of valid evidence. The campaign against Labour was sealed with the infamous Daily Mail forgery, the `Zinoviev’ letter. Both issues played some role in the excuse to overturn the government and force another general election after only nine months.

Campbell was a key sceptic, given British history and conditions, over the new Comintern line on unions that came in during the very late 1920s and early 1930s. The sharpness of his scepticism became a factor in his removal from the Political Bureau of the Party in December 1929, after he failed to win election to the Central Committee at Congress. Campbell was possibly the most senior of British Communists, with an actual and deep experience of British trade unions to call upon, who was most openly resistant to the new line, as far as its effect on the Party’s relations with the existing structure of British unions was concerned.

He was by no means the only such leader within the British Communist Party to be resistant to pressure to support the forming of new, separate `red’ unions in Britain. At the Fourth RILU Congress, miners’ leader Arthur Horner (see separate entry) was sufficiently firm about his views to result in the Congress determining only to seek from the National Minority Movement a more vigorous entrist policy, which would only employ patience and tact to win support for revolutionary principles. Whilst the 10th Congress of the British Party, in January 1929, adopted a policy that specifically rejected new unions but, it should be noted, focused upon the increasingly reactionary stance of the Labour Party.

It is clear that, quite unlike the Communist Party of any other country, it was the character of British unions more than the nature of the associated social democratic party that put the British Party out of sync with the rest. Oddly, this was not always sufficiently clear to its own members, especially the newer and younger militants who had survived the General Strike and/or the miners’ lock out as militants and still remained members of the Party. Although the 10th Plenum of the Executive Committee of the Comintern had accepted that British red unions would only be formed at the high tide of industrial and political militancy and when the Party was much stronger, the British Party convened a second congress in 1929, the 11th , which would seek to resolve the issue. In the event, a new and larger Central Committee was elected and this was dominated by young militants less sceptical than Campbell, or similar minded Communists, was about the need for broad labour movement unity focused upon the unions and he was out of the elected leadership for some times as a result.

Contrary to the extraordinary efforts of most commentators on the new line to prove otherwise, it is more than evident that the British Party never quite accepted it. Although there were those in the leadership more inclined to a readier acceptance, Campbell’s influence did not completely wane. In the conditions of a new, National, government towards the end of 1931, Pollitt turned the RILU central council towards the argument for working within mainstream unions. By January 1932 the British Party’s Central Committee resolved to direct Party members into “systematic revolutionary mass work in the reformist trade unions”.

Campbell was an unsuccessful parliamentary candidate in 1929, 1945 (when he stood for the Party in Greenock), 1950 and 1951 but this was not his forte. He was one of the few, then as editor of the Daily Worker, to join Harry Pollitt in concern about the Party line opposing the war against Germany from 1939 until the German invasion of Russia in 1941. Campbell went back to the Daily Worker as Assistant Editor from 1942 and it is not surprising that, after Bill Rust’s death, he was re-appointed to the key position of editor of the Daily Worker in 1949.

The National Archives contain extensive security service files on Campbell, only released in recent times. One security file includes speculation that when Campbell was appointed editor of the Daily Worker, John Gollan, was simultaneously made assistant editor to watch Campbell and make sure that he followed the party line. It is not clear who was supposed to be watching whom!

Such speculation by MI5 rather missed the point, that Campbell was ideologically shoulder to shoulder with Pollitt on the view that the special nature of the British labour movement, in the context of the uniquely lengthy fight for liberty that had moulded the character of British bourgeois democracy. It was highly likely, especially in view of later events that would see Gollan take over from Pollitt, that his assistant editorship, under Campbell, was seen by Pollitt as a kind of apprenticeship for future leadership. In that context, outsiders have failed to grasp the true significance of Campbell in British Communist Party history as a man who had an almost visual and instinctive analytical sense, which he was able to convey in words, of the organic nature of the British labour movement.

There are extensive reports of Campbell’s activities in the MI5 files from as far back as 1920, including reports of speeches made, cuttings of his journalistic work and general surveillance material. A bundle of documents from the security forces show detailed observation from 1933 to 1953 for the activities of Campbell’s wife, Sarah. A report on Campbell’s arrest for obstruction at a Communist Party meeting in February 1937 was also retained by the security forces.

Campbell, who died in 1969, was a prolific writer of, especially, pamphlets; a list of most of them follows:(NB published as a Communist Party pamphlet, unless otherwise stated.)

1924: “What is the use of Parliament?: the limitations of parliamentary democracy as disclosed in the general election”

1928: “Red politics in the trade unions: who are the disrupters?”

“Peace- but how?: a workshop talk”

“Only Communism can conquer unemployment : a reply to Lloyd George and others”

1940s: “Your part in victory: an appeal to the workers in the mining, shipbuilding, engineering and building industries” [Scottish Committee]

1942: “Socialism through victory: a reply to the policy of the ILP” [Scottish Committee]

1945 “Trade unions and the general election”

1945: “Over to peace : Communist policy for the reconversion of industry”

1948: “What’s up with the Russians?: answers to some of the questions people are always asking about Russian policy” [PPPS]

1963: “The case for higher wages : the incomes policy racket exposed”

Below: Campbell in 1961 (left) and the announcement of his death in the Morning Star

Bill Campbell Bill Campbell was the son of J R Campbell, an iconic figure in the British Communist Party. As a teenager at the height of the depression, Bill Campbell left Britain and took a […]

Kenneth John Campbell was born in Crofton Park, south London, on September 26th 1909. The son of a Lloyd’s insurance man, he was educated at St Dunstan’s school, Lewisham. He was then articled to his […]