Idris Cox was born in July 1899 at Llwydarth Cottages, Maesteg, to a mining family that moved to Cwmfelin the following year and where Idris then lived for the next 24 years. He joined his father at Garth pit, working as an assistant to a hewer, when only very young.

At 18 years of age, he was elected to the management committee of Garth Miners’ Institute. In 1920, he became his miners’ lodge delegate to the Maesteg district and to all-coalfield conferences and began to attend Marxist education classes.

Cox was elected Lodge Chairman in 1921 and during that year’s lockout became involved in the Maesteg Valley Relief Committee, which organised the communal feeding of children. Two years later, he obtained a two-year scholarship from the South Wales Miners’ Federation, enabling him to study at the Labour College in London. There, after the 1924 general election, Cox joined the Communist Party.

In 1925, he returned to Wales but could not find employment, other than a short period as a deputy-checkweigher. Finding himself unemployed, he assisted the Maesteg Communist Party to form a branch of the National Unemployed Workers’ Movement but, in October 1925, he was given a job at Oakwood Pit.

After the Great Strike, in October 1926, Cox attended his first National Congress of the Communist Party. Unemployed yet again, he was active in public speaking for the NUWM at labour exchanges and in taking Marxist educational classes before he became Communist Party Area Organiser for Mid-Glamorgan. During the summer of 1927 Idris Cox became a full time organiser for the South Wales Communist Party.

In defiance of anti-communist bans, in 1927 he was elected Vice-Chairman of the Maesteg Labour Party but during the summer of that year became the Communist Party’s full-time Welsh District Secretary. In 1928 he was co-opted to the Central Committee and later that year attended the Sixth Congress of the Communist International in Moscow.

Late in 1929 General Election, after Harry Pollitt became the Party’s new General Secretary, Cox moved to London to join the new Political Bureau. Now responsible for the Communist Party’s Parliamentary Department, he was also a correspondent for `Workers’ Weekly’. During the 1930s he held the position of National Organiser in the Party and spent most of his time visiting various districts around Britain. Much of this work was directed at building the significant local government electoral base of the Communist Party in mining and rural areas.

While visiting Bradford he met his future wife, Dora Roberts, who was active in her own right in the labour movement and the Communist Party – they married in 1931. In 1934, Idris Cox stood in the County Council elections in South Wales for the Caerau and Nantyffyllon division in the Maesteg Valley, coming a close second to the Labour candidate. In 1935, Cox was, for a short time, the editor of the `Daily Worker’.

Idris Cox produced a pamphlet entitled `The People Can Save South Wales’ in 1937, following his return as District Organiser. This asserted the right to self-determination and support for the use of the Welsh language. There were, however, differences on the question, especially from miners’ leader Arthur Horner, who was also chair of the Welsh Committee. Cox was the main organiser, during the run up to the 1945 General Election, of Harry Pollitt’s narrowly defeated bid to win the seat for the Communist Party. Seemingly, Cox felt that a more positive attitude to Welsh national issues might have assisted the campaign. However, Cox was the Party�s representative on a committee for a Parliament for Wales campaign committee, attending the 1950 inaugural conference.

He moved to King Street to head the International Department in June 1951 and worked full-time in this capacity or another until his formal retirement in 1970. During this time, he worked closely with leaders of the national liberation movements of what were then colonised nations was contributed to the formation of the Movement for Colonial Freedom.

Cox was the author of many pamphlets and books, including a translation into the Welsh language of Marx and Engels’ 1848 `Manifesto of the Communist Party, `Maniffesto’r Blaid Gomiwnyddol, published by the Welsh Committee of the Communist Party in 1948. Other titles were: `The Hungry Half: a Study in the Exploitation of the `Third World’, `Socialist Ideas in Africa’ (1970) and an undated (c1972) typescript autobiography – `Story of a Welsh Rebel’. He died in 1989. 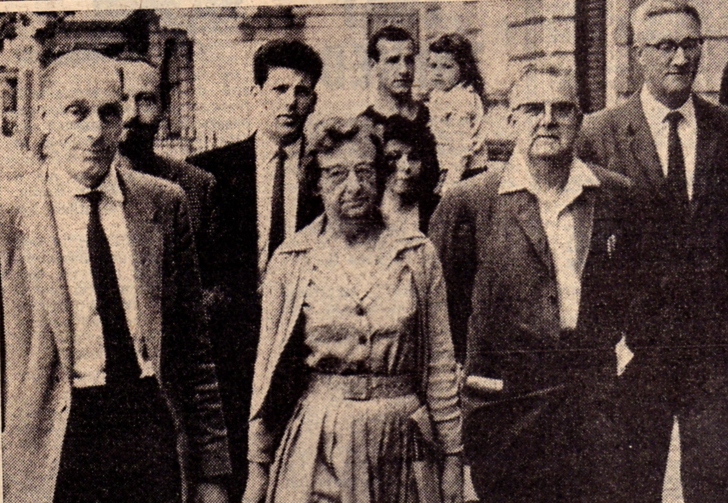 Idris and Phyllis Rose  Idris Rose first unsuccessfully stood as a Communist candidate for the Urban District Council in Trowbridge, Wiltshire, in 1946 but some years later was to successfully join the council as an […]

Dora Cox’s grandfather, a Yorkshire man, worked on the Russian railways and her father was active in the 1900 wave of strikes there and then had to flee to London, where he met and married […]