Helen Crawfurd was a prominent suffragette, originally a member of the Independent Labour Party, she was one of the leaders of the rent strikes of 1915. She later became a life-long Communist.

As leader of the Women’s Peace Crusade, founded in 1916-17, Helen Crawfurd was also a vociferous anti-war and anti-conscription campaigner. She was a much loved and admired leader of British Communism, as testified to by a eulogy on her death in 1954:

“Her distinguished appearance, her warm personal charm, her lively wit, her single-minded devotion to the cause of the workers, and clarity of purpose, her fearlessness and courage, her nobility of mind and sterling character, made her loved, admired and respected by all the friends who knew her, and from her foes, who may not have loved her, she compelled admiration and respect.” Margaret Hunter 1954 (Communist Party member, Polmadie, 1922-1986)

Helen Crawfurd-Anderson was born Helen Jack on November 9th 1877, in the Gorbals District of Glasgow, the daughter of a master baker. He was President of the Operative Bakers’ Association, a Conservative Party member and a Presbyterian. Helen had two sisters and three brothers. Her parents moved to Ipswich, in Suffolk, England during her childhood.

On returning to Glasgow in 1894 aged 17, to the middle class district of Hyndland, she was deeply shocked by the conditions of the Glasgow workers. She tells of this in a letter written to a friend only a few weeks before her death in 1954. “The misery and poverty of the Glasgow workers, the physically broken-down bodies, bowlegs, rickets … appalled me.”

On 18th September 1898, she married the Reverend Alexander Montgomerie Crawfurd, who was Minister of the Barrowfield Church in the Parish of Anderson. This included part of Glasgow’s Dockland, and some of its worst slums and she wrote that “coming into contact with Dockland life, and human misery indescribable … the living conditions appalled me, a lover of beauty. It struck me as ugly, inhuman and cruel.” This dawning consciousness of the condition of the mass of Glasgow’s workers was to grow and develop into a passionate desire to change those conditions, a tireless struggle towards this end, and a clear-headed, unshakeable conviction that the changes would be accomplished.

In the Docklands, she began to listen to the Socialist propagandists at open-air meetings, was impressed by their arguments, and soon entered the suffragette movement, feeling “that if the Mothers of the race had some say, then things would be changed.” Thus began a lifetime of devoted service to the working class movement. From around 1900, she joined the WSPU and became an outstanding fighter for the right of British women to vote. Helen Crawfurd was sent to prison three times for her activities in the suffragette movement, She spent a month in Holloway Prison in 1912 for breaking windows and was imprisoned for one month for making inflammatory comments in Perth but released after a five day hunger strike), She was also conditionally released from prison in Glasgow’s Duke Street Prison from a one month sentence for smashing windows of the army recruiting offices, only after an eight-day hunger strike. After her release a bomb exploded at Glasgow’s Botanic Gardens and Helen was implicated and was sent back to prison, only to be released after another hunger strike!

She took a fearless stand in opposition to the Imperialist War of 1914-18. In June 1916, she initiated, and became Secretary of, the Women’s Peace Crusade. Also involved were her good friends Mary Barbour and Agnes Dollan. She was twice arrested for her anti-war work, appearing in the dock with Willie Gallacher and other Socialist leaders. Helen was also active with Mary Barbour, Agnes Dollan, Jessie Stephens and other women in the Glasgow rent strikes against profiteering Landlords that resulted in the Rent Restriction Act of 1915.

She was a member of the British delegation to the Conference of the Women’s International League at Zurich in 1919. This delegation included all the foremost women representatives of the British working class movement of that time – Mrs. Snowden, Madame Despard, Ellen Wilkinson, Mrs. Pethick– Lawrence and others. This delegation chose Helen Crawfurd Anderson to make the report to the Conference on their behalf. Their choosing her was a tribute to her valiant anti-war work during 1914/18. And it was something more – it was recognition of the fact that she stood head and shoulders above the rest of the women in the movement.

During the 1914/18 war she had joined the Independent Labour Party, and became Vice-President of that organisation in 1918, and one of its principal propagandists, travelling throughout Scotland and many other parts of Britain to address meetings. She became disillusioned with the ILP and in 1920 established an unofficial grouping within the ILP, known as the `Left Wing Committee’, with a journal the `International’. This grouping, which included Emile Burns, R Palme Dutt, E H Brown, Shapurji Saklatvala, J R Wilson and J. Walton Newbold, joined the Communist Party.

She had welcomed the victory of the Russian Revolution in 1917, and visited Russia in 1920, as an ILP delegate to the second congress of the Third International. There she had an interview with Lenin, which was to help chart the future course of her participation in the movement. To the end of her life she was filled with unbounded admiration for the Bolsheviks. “What a job the Bolshevik leaders undertook, What a magnificent job they have done, Anyone who refuses to see the significance of what the Russians have done can only be either dishonest or dead mentally! ” she wrote shortly before her death.

She is pictured here with the Methil Communist Party Women’s Section in 1923. 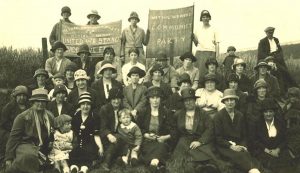 On her return from Russia in 1920 she became Secretary (in 1921) of the Workers International Relief Organisation (WIR). She raised money for the famine-stricken people of the Volga region and carried out relief work in Germany, addressing a meeting of 10,000 in Berlin in 1924 on behalf of the German Communist Party (KPD) and in all the mining districts of Britain during the lockout, which followed the General Strike of 1926. She succeeded in extending the relief work to the famine-stricken West of Ireland and to the Scottish Highlands during periods of depression. She tells how “Jim Larkin lent us a car to visit far parts of Ireland and carry food to the hunger stricken people of Donegal”. The relief in Donegal was particularly acute because of extensive flooding, Helen worked with Constance Markievicz, Charlotte Despard, Peador O’Donnell, Father Flannigan and Dundee Communist Bob Stewart, who stated “These three women (Crawfurd, Markievicz and Despard) formed a wonderful trio, With entirely different backgrounds they had worked miracles in the struggle for women’s rights, yet it took the flood relief in Ireland to bring them together”.

In 1921 she had joined the newly-formed Communist Party, becoming a central committee member, setting up the Women’s Department of the Communist Party in January 1922 and editing the women’s page of `Communist’, the Party’s journal. Helen Crawfurd, in her Communist Party election address for the Govan ward, Glasgow City Council in 1921, stressed her commitment to improving the political and economic status of women. This is one of the earliest examples of a political candidate in Britain making gender into a political issue.

In 1927, Helen was involved in establishment of the League Against Imperialism, along with Communist sympathiser Reginald Bridgeman. She stood as Communist candidate for Bothwell, Lanarkshire in 1929 and North Aberdeen in 1931. In the years of the struggle against Fascism, she was Secretary of the Anti-Fascist Organisation in Glasgow, when Moseley, would be leader of Fascism in Britain in the 1930s, was hounded out of Glasgow when he made a visit, and never permitted to hold a meeting. 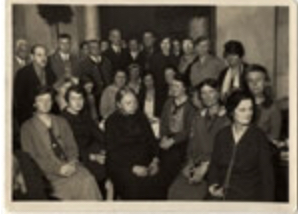 On the eve of the Second World War in 1939, she organised a Peace Congress of representatives from countries with the British Empire. In her later years she went to live at the small town of Dunoon, on the lower reaches of the Clyde, the so. It is the kind of place to which elderly people retire to spend their remaining years in leisure. But Helen was never “elderly” right to the end; it was not in her nature to “retire”. In 1945 or 1946, when she was 68 years of age, she was elected to the Dunoon Town Council, serving two years as Dunoon’s first ever woman councillor before ill health forced her to retire.

She re-married in 1947 to fellow Communist Party member George Anderson. In her final years, she kept up a voluminous correspondence on local and international affairs in the press. Only days before her death one of her letters appeared in the correspondence column of the Daily Worker, criticising the quality of certain goods on sale at the shops of the Co-operative Movement and demanding that the Co-operative Movement should produce high quality goods for its customers.

Willie Gallacher, in a moving oration at Helen Crawfurd Andersen’s funeral, said “Helen was so beautiful, in her mind and in her soul … there is so much I might say of her and yet fall far short of all she accomplished and all she sought to do.”

When she was 75 years of age, she was chair of a session of the Scottish Congress of the Communist Party. As Margaret Hunter recalled, “Her presence belied her years, as in a clear ringing voice she made an inspiring call to the women delegates at the Conference. Her natural eloquence, native humour, real love of people and burning hatred of all forms of oppression combined to make her one of the finest orators in Britain.”

She was to remain an illustrious member of the Communist Party right to the end of her life. Helen Crawfurd Anderson died on 18th April 1954, in her 77th year. Sadly, her autobiography remains unpublished.

Helen Rosenthal Born in June 1949, of Jewish background, she was the daughter of Phyllis and Harold Rosenthal, the latter of which was an music critic, writer, lecturer, and broadcaster about opera and the […]

Helen Muspratt (Dunman) Born in India of an army family, she was sent to school in Britain. On her father’s retirement in 1922, the family lived in Swanage in Dorset. Having got to know a […]