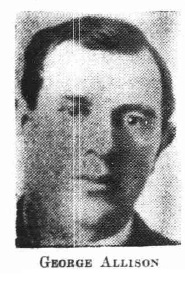 Born 1895, Allison was a founding member of the British Communist Party and was for a long time a member of the central committee, or executive, of the Party.
Like many early Communists, George Allison hailed from Scotland. In the identity of his alias, Donald Campbell, he was one of those celebrated Communists prosecuted for illegal entry into India, arising from events in 1927 and 1928 that would lead to the infamous 1929 Meerut conspiracy trial. He was one of a large number of absent “co-conspirators” named along with those arraigned for conspiracy to deprive the Crown of India.
He was also effectively the leader of the British Minority Movement in the late 1920s, as its secretary. Allison took the view that the enforced formation of red unions in Britain would be a mechanical approach and won the 1930 RILU Congress to that position. If formations were necessary, this should only be after it was clear that an appetite for so doing had been displayed at a series of district conferences, which would be followed by a national conference. In the event, real life showed that British red unions would only emerge from special circumstances.
Allison was charged under the Incitement to Mutiny Act and sentenced to three years penal servitude in November 1931 for trying to spread communism among sailors – after the mutiny). Bill Shepherd was also convicted and they were both set up with the help of an informer with the aim of diverting political responsibility way from the government.
Willie Allan took over Allison as MM secretary.
George Allison’s mother died at her home in Kirkcaldy aged 83, at a time when he was the North Midlands District Organiser of the Party. [Daily Worker, November 30th 1939]
George Allison took charge of the Daily Worker Readers Leagues in 1940, during the war-time ban on the Daily Worker. Allison added the word “Defence” to the title and helped set up a network of 160 local factory and area leagues. These organised the activities of the readers in winning of support for the paper. The League worked chiefly through these local committees rather than individual members, so as to mount a broad publicity campaign closely connecting the Daily Worker with and the mass organisations of the labour movement.
Rab Stewart took over from Alison as national organiser of the Daily Worker League from around 1943.