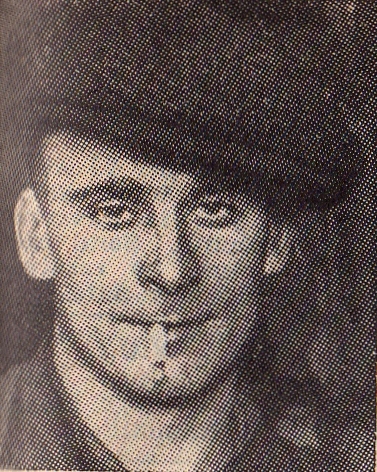 British Communists were to the forefront in the war against fascism in Spain from 1936-1939, members of the Young Communist League of Britain were particularly so. YCLers found their way to the scene very quickly, even before the International Brigades had been formed. `Challenge' announced that: "The Young Communist League of Britain lowers its banners to three of its members – Sidney Avner, Ray Cox and Frank Messer – killed while defending democracy in Spain. On Christmas Day 1936, in University City, Madrid, our comrades fell fighting Fascism."

Many more similar announcements were to be made. On February 12, 1937, the British Battalion of the International Brigade, 600 strong, went into action against Franco's fascists in Spain. Amongst the very first young British men to die were members of the YCL. One of the most famous of them was the great speedway rider, Clem Beckett, who killed in that memorable first action of Brigade at Jarama.

The sport takes place on a flat oval dirt track, around which riders slide their machines sideways into the bends using the rear wheel to speed round them. The then relatively new sport of speedway motorcycle racing was massively popular amongst young working class people in the 1930s. It is diffcult to imagine quite how much so; but, arguably, Clem Beckett was the David Beckham of his day. Young men aspired to his skill and daring and young women swooned over his dashing appearance!

Born in 1906, Beckett was a member of the Young Communist League and Communist Party in Oldham and Beckett lived on Swinton Street in Roundthorn. His trade was that of a blacksmith but, faced with victimisation and depression after the late 1920s, he started riding the Dome of Death at fairgrounds. So, stunning and confident was his mastery of this feat that, in no short time he had became famous as Dare Devil Beckett, the man who rode the Wall of Death and who broke world records. As a rider for the Belle Vue, Manchester track, one of the first in the country, he was a key force in setting up a union for speedway riders.

Like much of Clem Beckett's achievements in his short life, this was in itself an extraordinary development. Motorcycle riding in general was largely more open to middle-class elements and there was something of a militaristic culture that aped First World War biplane fighter pilots. The British Union of Fascists established a basis amongst speedway riders and promoters. One rider was even interned during the Second World War as a suspected Nazi spy.

On March 30th 1929, Beckett started work with two other speedway stars (Spencer 'Smoky' Stratton and Jimmy Hindle) to open Sheffield's first speedway track – it is one of the few still open and is highly popular even today. Operating as Provincial Dirt-Tracks Ltd, the group had sunk their savings into buying land at Owlerton Meadows. Since the sport was then sweeping the country, it was perhaps not such a risky venture in retrospect but many thought not at the time. It was so new that it was only the fifth such venture in the country. Beckett now shone as the star of the new Owlerton Stadium, winning the golden helmet in front of 15,000 spectators, whereas even with a renaissance in the sport only a few thousand would now turn out.

Clem Beckett's oldest friend, George Sinfield, later to be the Industrial Correspondent of the Daily Worker, wrote of him: "I knew Clem well. He stayed with me when visiting London. Beneath his leather jacket beat a heart of gold. It was a heart that throbbed in rhythm with the struggle of the working people. When news of his death reached speedway fans, they saw their idol in a new role. When Clem joined the International Brigade, he chummed up with a young poet and novelist, Christopher Sprigg. The friendship of the sturdy, keen-witted sportsman with the quiet intellectual was one of the most moving incidents in the struggle for Spain. They died together. They sacrificed their lives during the epic battle of Arganda Bridge on February 12, 1937. Clem and Chris were posted at a vital point. They faced innumerable odds, artillery, planes, and howling Moors throwing hand-grenades. Their section was ordered to retire. Clem and Chris kept their machine-gun trained on the advancing fascists, as a cover to the retreat. The advance was halted, but Clem and Chris . . . lost their lives." [Challenge April 15th 1950]

Beckett's machine gun jammed as he was trying to keep open the Valencia- Madrid road, with the result that the position was overwhelmed by Fascist troops and he and all of his comrades were wiped out. Clem's death was front page news in some cities in Britain and many were surprised that he had even gone to fight in Spain. There is a sense in which Beckett is more representative of the daring young men of the International Brigades than the false image of pale poets that is sometimes offered up. Working class young men in the wake of the General Strike and mass unemployment did surprising things, not only to make a living but somehow the very drama of the times made for great sacrifices, too.

With speedway becoming ever more popular Sheffield once again, a new interest in this star of yester-year is evident in the city's motor racing community. There is talk of a book about him, his old club speaks his name with pride and even Clem's old crash helmet is held by Oldham Museum.