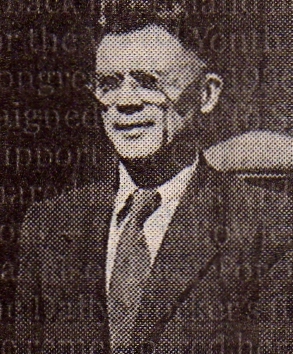 Bill Carritt was born Gabriel Carritt, the son of an Oxford philosophy professor, on May 9th 1908. He was educated at Dragon School and Sedbergh, where he was captain of rugby. He gained a scholarship to Christchurch, Oxford, where his friends included the future Labour minister Dick Crossman, Stephen Spender and W H Auden.

He then went to Columbia University in New York, where he became involved in carrying supplies to striking Kentucky miners and had his teeth broken by company police. He toured Alabama and Georgia, trying to recruit black students to the National Student League and joined the Communist Party of the USA. Back in Britain, he campaigned for the Scottsboro boys, young black Americans mis-tried for rape and sentenced to death.

In 1933-34 he taught in an officer cadet school in Silesia, which was taken over by the Hitler Youth. Back in England, he worked for the World Youth Congress.

When the Spanish civil war began, he and John Gollan (see separate entry), then general secretary of the Young Communist League, walked through the Pyrenees to find out what was needed in aid. The result was the British Youth Foodship Committee, which collected food and clothing for the republic. Bill’s brother, Anthony, died fighting in Spain and his other brother, Noel, was wounded.

In June 1937, as Secretary of the League of Nations Youth, he broke into a secret trial in Essen of the Bundische Jugend, a German youth league, to protest that the young men on trial had been held for two years without even being told the charges against them.

He shared digs with Jean Ross (see separate entry), who was `Peter Porcupine’, the Daily Worker’s film critic, and the woman who inspired the character of Sally Bowles in Christopher Isherwood’s `Goodbye to Berlin’.

In May 1939, he won 4,674 votes, or 32.6% of the vote, in the Westminster constituency as an anti-appeasement candidate, backed by supporters of all parties who were of that mind – even anti-Chamberlain Tories. In the Second World War, he served with the Royal Artillery, where he was withdrawn from a radar course as "unsuitable" and, even though he had completed an officers’ training course, was told his Party membership precluded him from receiving a commission. When the Daily Worker was denied permission to have a correspondent at the Second Front, Bill organised a protest letter that resulted in the signatories being questioned by intelligence officers.

He then fought in Burma with the Welch Fusiliers; during the battle for Mandalay, he was flown home to stand as a Communist Party candidate for Westminster Abbey in the 1945 general election. He polled 17.6% of the vote and later he and his second wife, Joan McMichael (see separate entry), were elected to Westminster council. (Bill’s first wife was Margot.)

In 1946, he was one of five Communists tried at the Old Bailey and found guilty of leading a campaign which put homeless families into empty luxury flats. In danger of being imprisoned, a major defence campaign ensued and they were merely bound over to keep the peace for two years. The government rapidly announced a new programme of building of social housing.

Until the 1960s, Bill worked for the Communist Party full-time, including a difficult spell as Daily Worker foreign editor. In his last decade of work, he was a liberal studies lecturer at the London College of Printing. He died aged 90 on May 7th 1999.

Source: Guardian 24th May 1999 and other material