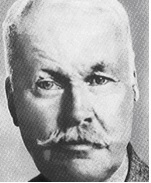 W H Andrews was the first General Secretary of the Communist Party in South Africa. But he was born in Suffolk in 1870 into a working-class family and was a member of the ASE. He emigrated to South Africa in 1893, and became a railway fitter there. In 1902 helped found the first Trades and Labour Council, the first chairman of the South African Labour Party in 1909 and was elected to parliament in 1909.

In November 1922 he was elected to the executive committee of the Communist International and spent most of the following year in Moscow and two years later was the first general secretary of the precursor to the South African Trade Congress. During the 1940s he served as chairman of the party’s central committee. The Communist Party of South Africa was banned in 1950 and Andrews appears to have returned back to Britain.

Although he had connections with the red village of Leiston and its journal, Leiston Leader, Bill Andrews did not return to Britain but died in South Africa in 1950.  [Info from David Horsley.] Ray Alexander Simon, an outstanding South African Communist and life long fighter for liberation of the South African people, mentions the death of Andrews in her excellent autobiography “All my life and all my strength”. She hosted  his 80th birthday party in her own house in Capetown and goes on to state “Comrade Bill Andrews died in Groote Schuur Hospital of heart failure on 26th December 1950″. Her book also includes a photo of  Andrews’s funeral in South Africa.  Labour Monthly carried a fulsome obituary of him in February 1951.