Bert Baker’s long association with the Daily Worker began in 1940, as the editor’s secretary and then, when the ban on publication ended, for a short time as a reporter. In 1940, Bert was secretary to the Daily Worker’s editor and was responsible for taking home each night a small box file with the addresses of Daily Worker readers’ groups so that they would not be found in the event of a raid by the Special Branch.

Chris Birch, then a neighbour and local YCL secretary continues: “One night the police called at Bert’s home because a light was showing in the blackout. Before opening the door, his mother threw the file out of the window into the garden three floors below and Bert later had to scrabble around in the pitch-black garden trying to retrieve the errant index cards.”

Another of Bert’s tasks was to arrange and rotate secret venues for meetings of the Communist Party’s triumvirate of Harry Pollitt, Rajani Palme Dutt and Bill Rust. “Once Dutt, who looked pretty sinister in the best of lights, went to the wrong address and provoked screams from the unfortunate woman who opened the door.”

Bert then worked on local newspapers and the Daily Mirror, joining the Soviet Union’s TASS News Agency as its British correspondent in 1949. In 1953, he became the editor of the Communist Party’s internal weekly journal `World News and Views’.

He rejoined the paper in 1957, serving as features editor for twenty years, including into the period of the name change to `Morning Star’, doubling as the paper’s TV critic, “Stewart Lane”.

Ill-health forced him to retire in 1979 and he turned to freelance work but continuing as the Star’s TV critic until 1989. Whilst freelancing, he contributed to many journals including The Listener, The Scotsman, Variety and the children’s weekly, Early Times.

He was also a life-long member of the National Union of Journalists, a member of the Broadcasting Press Guild and the Critics’ Circle.

Below: Bert Baker (right) interviews comedian, singer and actor, Harry Secombe for the Daily Worker in 1963 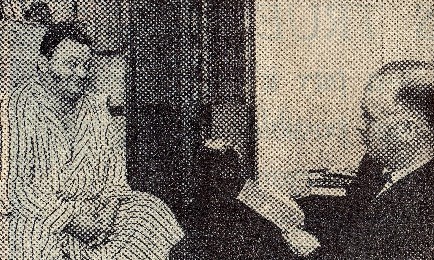 Bert Maskey (Barnett Masansky) – a biography by his grandson David Mason The photograph is a Photoshop restoration from Barnett’s Alien’s Identity Book. To go back to his beginning, Bert Maskey was born ‘Barnett Masansky’ in […]

Bert Williams Born in 1895, Bert Williams was originally a miner from Wales, from a working class family of four sisters and a brother. He began work in the pits at the age of 14. […]

Betty Baker Betty was born on July 14 1921 in Hackney to Charles and Holly Franklin; having an older brother, Charlie, and two younger sisters, Stella and Olive. She worked at the Daily Worker, at […]