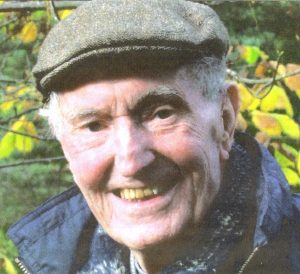 Atkinson was born on March 26th 1928 in the small village of Uphall Station, West Lothian, Scotland. It was this harsh climate that shaped the young Eric’s worldview during the 30s and 40s, which led to his becoming a life-long Communist.

His father was a prominent Labour activist and one-time election agent for Manny Shinwell. Yet, Eric simultaneously joined the Young Communist League and Communist Party in the late 1940s, not an easy time to do so.

He was full-time Communist Party organiser for Lanarkshire and Lothians in the 1960s. Then, for many years, he was secretary of the West Lothian Area Committee and a member of the Scottish Committee. But Eric’s political activity was not confined to the big issues of the day. His relentless activity was also firmly rooted in his community in Bathgate where he settled with his wife Marjorie and four daughters.

At the May 1968 council elections, Eric stood as a Communist Candidate for Bathgate Council securing 111 votes. Other Communist candidates in Bathgate included his wife who secured 99 votes, J Campbell (204), A Hendry (202), and C Bett (147). [Glasgow Herald 6th May 1968]

In between bouts of Party full-time work, or before, Atkinson often struggled to find work in his normal occupation as a glazier. Indeed Eric was rejected for work so often it became obvious he was on a blacklist as a result of his political activities.

In 1970s, he was a member of the Commission on Inner-Party Democracy.

He was the Communist Party’s national fund organiser between 1985 and 1988, Scottish treasurer until 1990, and attended the 1988 and 1990 TUCs as a Party worker. He joined the National Co-operative Movement Advisory Committee in 1990.

In 1989, as national fund organiser, he visited Merseyside, Midiands, East Midlands, South East Midlands North Western, Scot land, Wales, West of England and Yorkshire. A spell of 10 days in Scotland was followed by time in London, West Middlesex and Eastern. “Everywhere he has been he has surprised the Iocal Comrades by the size of the donations he has got for the Party.”  (Letter from Judith Gradwell) This was, indeed, a remarkable achievement at a time when so many members of the Party were dismayed at the turn events ahd taken in relationship to the Morning Star and those members who continued to support it.

Such loyalty displayed so heavily in the crisis years of the CPGB may have been due to his being influenced by Mick McGahey (see separate entry), also an Edinburgh-based Party member  to be obviously demonstrative.

Despite this loyalty at a time when the CPGB executive was busy liquidating the Party, his obituarist much later insisted that he “was and remained a firm supporter of the Morning Star and was a local fundraiser for the paper throughout his life”.

Eric W Edwards Born on 23 April 1944 in Croydon to Communist parents, Eric was a longstanding member of the British Communist Party in both Surrey and the South Midlands districts, until he was expelled […]

A brief biography of Eric Gower by Graham Stevenson additions and corrections welcomed: info@grahamstevenson.me.uk   Eric Gower, who had been Secretary of Manchester City Labour Party, stood as Communist candidate for Parliament in a […]